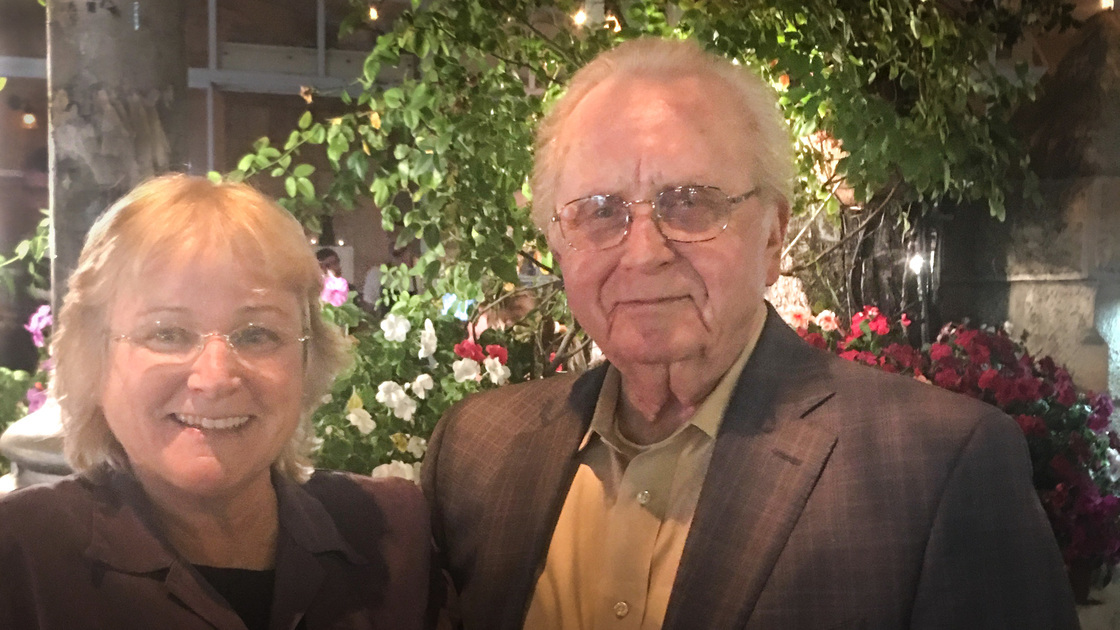 EDMOND—City of David Cultural Foundation chairman Gerald Flurry flew from Birmingham, England, to Tel Aviv, Israel, on October 16 to meet with archaeologist Eilat Mazar in Jerusalem the next day. During a two-hour meeting and then a follow-up dinner, Mr. Flurry and Dr. Mazar, along with foundation employees Brad Macdonald and Brent Nagtegaal, discussed the City of David Cultural Foundation’s ongoing contributions to Dr. Mazar’s excavations and research.

Both Mr. Flurry and Dr. Mazar emotionally confirmed their total commitment to the partnership, which has included six excavations over the last 11 years. The relationship actually extends back much further to the relationship between Ambassador International Cultural Foundation chairman Herbert W. Armstrong and Dr. Mazar’s grandfather, archaeologist Benjamin Mazar, who partnered with each other from 1968 to 1977.

On the flight to Tel Aviv aboard the Philadelphia Church of God’s corporate jet, Mr. Flurry emphasized to Mr. Macdonald the importance of having a much larger work in Jerusalem. His goal, he said, is to get the Church’s message to everyday Jews, who will be much more receptive than the elites. He also discussed writing a biography about Dr. Mazar to bring more attention to her many archaeological discoveries that prove the biblical history accurate. He also discussed building a small team (based at the pcg regional office in Edstone, England), similar to the one Steve Jobs supervised at the animation company Pixar, for the purpose of delivering a powerful warning message to modern Judah through the Internet, radio, publications and advertising.

At the meeting, Mr. Flurry quoted to Dr. Mazar something she had said in the past: “You need to have vision to do a dig in Jerusalem. You need to see the big picture of how things fit into the biblical picture. … Today’s archaeologists lack this vision, although many of the everyday people still hold it firmly in mind.”

Mr. Flurry then told Dr. Mazar that most of these “everyday people” still haven’t heard about her “sensational discoveries.” A biography mostly about her discoveries, coupled with an advertising campaign about those discoveries, would help change that, he said. Citing his past experience in the advertising field, he said, “I know from what experience I’ve had, that I could write some of the greatest archaeological ads you’ve ever seen.” Dr. Mazar enthusiastically approved his biography pitch.

Mr. Flurry praised Dr. Mazar for her discoveries of David’s palace, Solomon’s wall, the two bullae (clay seal impressions) of Jeremiah’s captors, Hezekiah’s bulla, a golden Jewish treasure trove and Nehemiah’s wall. There is no archaeologist in the modern era that comes close to this kind of resume, he said.

After listening to Mr. Flurry’s plans to publicize her work, Dr. Mazar informed the group that an hour before the meeting, she had finally received a license from the Israel Antiquities Authority for a three-month excavation on the Ophel, which started in early 2018. She had been trying to obtain a license for over a year. She expressed her hope that the smaller Ophel dig will open the door to excavate more of the area that includes what she believes to be King Solomon’s palace.

Dr. Mazar returned some kind words of her own, saying that the “support [of Philadelphia Church of God members] gives me strength like you can’t imagine.” She recalled some advice that Mr. Flurry gave her years ago, at a time when she was facing some opposition from authorities. “I really kept your words in mind,” she said.

“At one point, Dr. Mazar was talking about how she is getting older,” Mr. Macdonald said after the meeting. “Mr. Flurry very sincerely complimented her, telling her she still looked youthful. Dr. Mazar was so excited and moved. She got out of her chair and went over and hugged Mr. Flurry and kissed him on the forehead. She was really excited about that. And the way she did it was so sincere and natural, all so familial. This relationship is deeply rooted and has been built over the decades. This is really obvious.”

The pcg’s City of David Cultural Foundation sent a handful of students and staff to the Ophel dig.