Tea and Biscuits With Aunt Mabel
Teach your children to honor and respect older people.
By Dennis Leap • Feb. 21, 2018 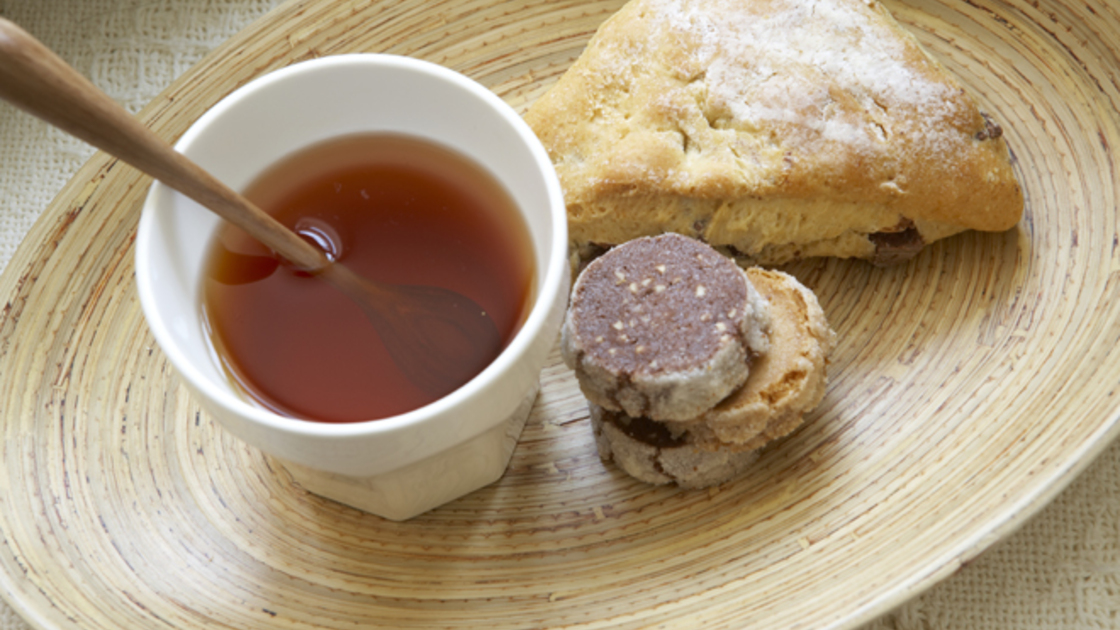 I grew up in a home filled with emotional turmoil. With seven children in our family, my father had to work long hours. We didn’t see him much. Yet we always had plenty of food, a roof over our heads, and good clothing to wear.

Our mother was sickly, which meant that often we were left to fend for ourselves. For me, fending meant dodging the “slings and arrows of outrageous fortune” precipitated by my older siblings. Even my younger brother got into the fray.

I was somewhat smaller and weaker physically than my brothers and sisters because I had severe, hay-fever-induced bronchial asthma. You could say I was the runt of the litter. I was often short of breath. I coughed and sneezed a lot, which was a source of irritation for all who lived in our cramped living quarters.

Now, I am not saying that I was innocent of any part in the petty squabbles that took place daily—especially in the summer. I simply didn’t have all the physical skills required to lock in a win. However, I became skilled at making quick, bruise-preventing escapes.

My hideaway—my safe haven from the raging storm of sibling torture—was just a short walk up through our terraced backyard, a right turn at the top of the brick steps, a short walk east on Agnes Avenue, then a left turn up the steep hill known as Stephen’s Street, and I was there: my fortress on the hilltop, Aunt Mabel’s house.

Aunt Mabel was one of my mother’s older sisters. She was a retired schoolteacher and longtime widow living by herself. I knew her as a loyal and loving support—a true friend. Somehow she seemed to know when I was troubled and knew how to fix it. She would make me tea and serve shortbread or ginger snap cookies, which were great for dipping in tea. Just hearing the whistle of her old teakettle made me feel welcome and secure in her tiny house.

We talked for hours. She actually listened to me. I’ll never forget how Aunt Mabel taught me how to play Scrabble and other board games. I will always remember the bright yellow canary in her dining room that would sing beautifully for a long time. Being around my aunt was always pleasant and peaceful.

I kept close to her through grade school, high school and college. I cut her grass, trimmed her bushes and hedges, and shoveled snow for her in the winter. And yes, there was always time for tea and cookies.

As I grew older, our talks changed. She talked to me about the bad things happening in the world and sweetly counseled me to not get into trouble like so many other teens my age.

When my wife and I were dating, I took her to meet my illustrious aunt. I felt it important for my wife to meet this dignified and wonderful lady. It was very apparent that her health was failing. Suddenly she seemed so much older, yet I could tell she still enjoyed our visit. I’ll never forget her smile and laugh as we talked. The only thing missing was tea and cookies. Preparing that would have required too much effort on her part, and we certainly did not want her to exhaust herself.

Teach Honor for the Hoary Head

Although I did not realize it at the time, through Aunt Mabel, God taught me a fundamental lesson that all children must learn: to give honor to and hold high respect for men and women who are older and wiser than they.

My growing-up years are proof that honor and respect for older people opens up great benefits not only to children, but also to parents, neighborhoods, states and even nations.

“You shall stand up before the gray head and honor the face of an old man, and you shall fear your God: I am the Lord,” God commanded the Israelites (Leviticus 19:32; English Standard Version). The Authorized King James uses the term hoary instead of gray, but the meaning is the same. Younger people should have such deep respect for an older person that they immediately stand up when a gray- or white-haired person enters a room. Why?

Contrary to current thinking, God does not consider older people to be washed up, but rather an invaluable source of knowledge and wisdom that can only be acquired through life experience. Study this verse carefully. Let it sink in, especially the last part. Showing honor and respect to old men and women is fearing God! Even one of God’s names is the Ancient of days (Daniel 7:9). Compared to God, the oldest human being alive is just a newborn. Unfortunately today, many consider God to be washed up.

Toddlers, children, teens and even young adults have to be taught to honor and respect older people—it doesn’t come naturally.

Our 21st-century world exalts youth. There is little regard for older, more mature people. The entertainment industry often portrays young children as being more capable and smarter than adults. A recurring theme in many films involves kids saving their parents. What a disaster! No wonder most children today show great disrespect and disregard for older people. This is no small problem.

“And the people shall be oppressed, every one by another, and every one by his neighbour: the child shall behave himself proudly against the ancient, and the base against the honourable,” Isaiah stiffly warned our modern nations of Israel over 2,000 years ago (Isaiah 3:5). God gave Isaiah a clear vision of our world. The prophet saw a society full of violence and oppression.

What is the number one cause of the societal breakdown Isaiah witnessed? Children are guilty of behaving proudly against the ancient. The Hebrew word rahab translated proudly could also be translated insolently. The Hebrew word zaqen translated as ancient can mean not only old man or old woman, but it can also mean elder, senator or any other government official. This means that youth today not only disregard, disrespect and dishonor older people, they also refuse to respect any person in authority. Few youth today are willing to listen to, let alone obey, those in authority.

Led by the United States, all of Western society is rejecting the wisdom stored within the experience of the elderly among us. Even most of our educational institutions reject the incredible wisdom stored in the annals of our history. For example, how many college-level classes exist on the wisdom Winston Churchill gained as the most famous statesman of the 20th century? The most likely answer is few to none.

Is your child insolent with you or other adults? If so, you had better deal with that problem immediately.

When we consider the lives of Noah, Abraham, Moses, Aaron and others like them we can see that God has a much different view of age than does our youth-oriented society.

Noah was already of an advanced age when he began delivering God’s message to his sin-sickened world. He was 600 years old when the Flood cleansed the Earth (Genesis 7:6). Abraham was 75 years old when God commanded him to leave his country and family, which was a major step forward in the fulfillment of God’s purpose for all mankind (Genesis 12:1-4). Moses was 80 and Aaron 83 when God used them to lead Israel out of Egypt (Exodus 7:7). Throughout history, God has used many of advanced age to carry out His plans.

Mr. Armstrong did the best work in the last seven of his 93 years of his life. Unfortunately, 95 percent of all the people he taught rejected the wisdom God gave him to impart to the Church, and many dismissed him as an “old man.”

Do we realize that Jesus Christ built the Philadelphia Church of God using the older members of God’s Church? At our first Feast in 1990, there was not even one infant in attendance. The group that attended the Feast that year was mostly comprised of people with hoary heads.

God wants the youth to respect older people, because of seniors’ well-developed capacity to teach vital lessons about living. Be sure to study thoroughly Titus 2:1-5. Paul made it clear to young Titus that the older men and women in his congregations were to teach the young men and women how to be good husbands, fathers, wives and mothers.

Aunt Mabel taught me many things. Even though I was having trouble getting along with my immediate family, she admonished me to love and respect my father and mother. She would tell me how important it was to be kind to my brothers and sisters. I didn’t always like what she had to say, yet I knew she loved me and was working hard to help me. Over the years I learned that she was so much smarter than I was. There was so much value in what she had to say.

Of course, no child should be expected to listen to or take counsel from an older person who is not living righteously. “The hoary head is a crown of glory, if it be found in the way of righteousness,” God says (Proverbs 16:31). Any adult who promotes a life of sin and rebellion against God, His laws and way of life disqualifies himself or herself from a position of honor.

In just a few short years, Jesus Christ will return to Earth and set up the government of God. He will restore the aged to their proper place in society. “Thus saith the Lord of hosts; There shall yet old men and old women dwell in the streets of Jerusalem, and every man with his staff in his hand for very age. And the streets of the city shall be full of boys and girls playing in the streets thereof” (Zechariah 8:4-5). Here is a beautiful portrait of the peace and happiness that will break out worldwide when Christ rules the Earth. Today’s hostile gap between children and older people will not exist.

Be sure that your children learn how to talk with and spend time with the elderly. Invite the elderly into your home. Not everyone has an Aunt Mabel in the family like I did. However, there are a lot of women in God’s Church who are very qualified to be one. Help your child find an Aunt Mabel he can confide in, tell his troubles to. Your child will greatly benefit from the experience. It will not be long before he learns to stand up for Aunt Mabel.