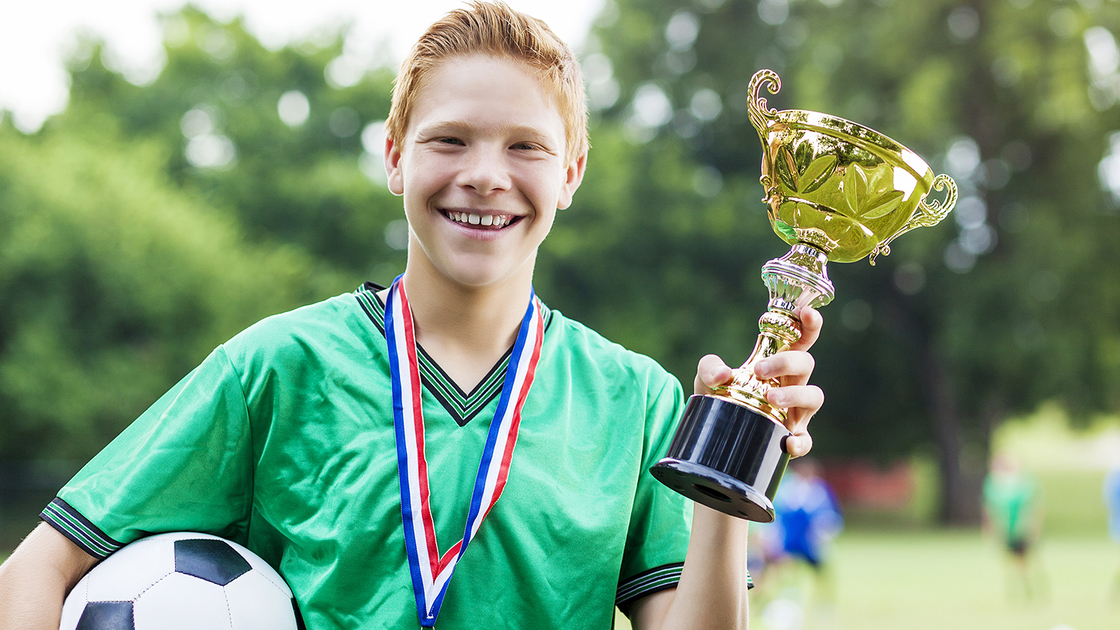 “What a power for good is a man in his prime.
Who will stand for the right with a firmness sublime;
Who will stand in his place with truth’s banner unfurled,
Who will let his light shine for the good of the world.”

That is an excerpt from a poem called “Manhood” by John M. Morse. To become a man like that, a boy must aim high.

In his autobiography, Mr. Armstrong wrote, “Most people, I have observed, are victims of circumstance. They have given no intelligent thought to choosing where they live, what they do, or planning for the future. They have no specific aim or goal in life. They are headed toward no definite purpose. They are where they are by circumstance.”

Since he wrote that, it has gotten many times worse—especially for men. These days, men are just drifting. They have no aim, no goal!

You know what all of those things have in common? They are all centered on the self. Self is at the center of the target at which they aim.

If a man’s main goal is to satisfy the self, then he is not going to accomplish anything worthwhile. He will have a wasted life. That is what is happening to so many men in our world today: They are wasting their lives.

Young men, I’m going to be straight with you. You really must be different! Something else needs to be in the center of your life.

Now, God obviously comes first in our lives. He should always be in the center. But when it comes to giving yourself something tangible to aim at, something that will help you make sure your life is pointed in the right direction and that you are setting the right goals—that you are really aiming high—you need to be focused on something else as well.

That something is family.

Put Family at the Center

I’m sure you would like to marry someday and have children. Those are wonderful goals. They revolve around family. A lot of young men want those things, but they don’t do what is required in life in order to have them. Family is just a wish—not an actual goal. As a result, they flounder.

If you really pursue the goal of having a family, it will stir a right ambition within you and take your life in a good, productive direction.

God builds the family around the man—around you. This means that you are both the foundationand ceiling for what kind of family you will have.

In other words, your family is going to build on top of you, and they are unlikely to exceedwho you are.

1 Corinthians 11:3 says “that the head of every man is Christ; and the head of the woman is the man; and the head of Christ is God.” God created physical, mental and emotional differences between the man and the woman to establish this order and structure—especially within the family. Your family is going to depend on you for a lot.

That is why it is especially important to aim high in establishing goals for yourself now.

Here are four specific, family-oriented goals to aim high in.

You are preparing to fulfill your role as the leader of the family, and you want your wife and children to be able to look to you as the head of the family. In fact, if you study into this subject in the Bible, you will find that the role you are aiming to fulfill is a mighty big one: to his wife, a man is a type of Jesus Christ—and to his children, he is a type of God the Father! Not an easy goal!

Titus 2:6 says, “Young men likewise exhort to be sober minded.” In the Revised Standard Version, that verse says, “[U]rge the younger men to control themselves.” The Moffatt translation says, “Tell the young men also to be masters of themselves at all points.” The Living Bible says, “Urge the young men to behave carefully, taking life seriously.”

Proverbs 10:4 says, “He becometh poor that dealeth with a slack hand: but the hand of the diligent maketh rich.” In other words, if you are lazy, you will be poor. This is the way so many young men are today, and they are poor because of it.

“Diligent” in this verse means “to cut, sharpen, decide, decree, determine, move, be decisive.” It’s an action word—it’s about getting things done. That is the kind of character you want to build.

Proverbs 12:11 says, “He that tilleth his land shall be satisfied with bread: but he that followeth vain persons is void of understanding.” “Persons” wasn’t in the original text of this scripture, so it should read as “he that follows after vanity,” or “frivolity,” or “worthless pursuits.” There are plenty of worthless pursuits in this world; Satan has made it that way on purpose. He wants to steal our time. If we devote our lives to his distractions, we are void of understanding.

“Understanding” can mean “inclination, resolution, determination.” If you spend your time on frivolities, you are going to lose your determination—your will—to develop manly character!

Proverbs 19:15 says, “Slothfulness casteth into a deep sleep; and an idle soul shall suffer hunger.” Laziness is addictive. It’s easy to let a little diversion get you into a long distraction, and before you know it, you are in a deep sleep.

In all these areas, you must lead yourself. You must exert self-control. If you can lead yourself, then God knows He can trust you to lead others properly (Luke 16:10). God created you for that role.

“It is a sad sight to see thousands of students graduated every year from our grand institutions whose object is to make stalwart, independent, self-supporting men, turned out into the world saplings instead of stalwart oaks, ‘memory-glands’ instead of brainy men, helpless instead of self-supporting, sickly instead of robust, weak instead of strong, leaning instead of erect,” wrote Orison Swett Marden in his 1911 book Pushing to the Front. “So many promising youths, and never a finished man!” How much truer today!

“The glory of young men is their strength …” (Proverbs 20:29). There is glory in knowing how to use your muscles and work hard. God made you to exercise and build your strength so you can work hard, lead your wife, be actively involved with your kids, and provide the right example.

“The first requisite of all education and discipline should be man-timber,” Marden continued. “Tough timber must come from well grown, sturdy trees. Such wood can be turned into a mast, can be fashioned into a piano or an exquisite carving. But it must become timber first. Time and patience develop the sapling into the tree. So through discipline, education, experience, the sapling child is developed into hardy mental, moral, physical man-timber.”

This is talking not just about physical strength, but also mental and emotional strength. You can build habits now that will make you the man you want to become. Get physically fit and stay that way. Be active mentally as well.

“If the youth should start out with the fixed determination that every statement he makes shall be the exact truth; that every promise he makes shall be redeemed to the letter; that every appointment shall be kept with the strictest faithfulness and with full regard for other men’s time; if he should hold his reputation as a priceless treasure, feel that the eyes of the world are upon him that he must not deviate a hair’s breadth from the truth and right; if he should take such a stand at the outset, he would … come to have almost unlimited credit and the confidence of everybody who knows him” (ibid.)

Aim for an Excellent Education

In schools today, girls are outperforming boys at almost every level. Girls have higher grade point averages, they outnumber boys in the National Honor Society almost 2 to 1, they are likelier to go to college. And more and more, they are getting better jobs than their male peers.

These facts mean that in more and more cases, women who marry will have husbands with less drive and a poorer education than they have! It will be much harder for them to look to those men as their leaders in the home. It will be much easier for them to take charge of their families. Those families will be cursed with problems because they’re not doing it God’s way.

Wouldn’t you like to marry an intelligent, well-educated woman? (You certainly wouldn’t want to marry a stupid, ignorant woman, would you?) Well—unless you want to marry a woman who is more educated than you, that means you had better become educated!

Don’t take your education for granted. You need an excellent education if you are going to be a godly leader for your future family.

By “excellent education” I don’t necessarily mean the most prestigious college education. I mean taking your schooling seriously, developing good work and study habits, and mindfully pursuing the training you need to put yourself in a good position for a productive career.

Proverbs 24:27 says, “Prepare thy work without, and make it fit for thyself in the field; and afterwards build thine house.” The Moffatt translation says, “First work your farm, and till the soil—then marry and set up house.” Educate yourself in how to live and provide for your family. Get established with a good job, and save some money. Then take on the responsibilities of a family.

You would like to marry an intelligent, capable woman. There are plenty of those women out there, but they aren’t going to be willing to marry uneducated, lumpish men! If you want to marry a high-quality woman, you must become a high-quality man!

Think about this: Almost six out of ten 18-to-24-year-old males live with their parents. Among those who are 25 to 34 years old, that number is still almost 2 in 10. Do you want to still be living with your parents when you’re in your 30s?

Most of those men probably didn’t think they would be living with their parents when they turned 34. In most cases, they didn’t think about and prepare fortheir future at all! They just did what seemed fun or interesting at the time. They never pointed their lives in a direction that would lead them to a position where they could support themselves. They never fixed the right goal!

If you want to be out on your own, that means you will most likely have to choose a career. You have to study to prepare for that—and you have to follow through! You have to have a goal that provides direction, and then you have to go after it.

Aim for a Challenging and Lucrative Career

Would you want to marry a woman who earns more money than you? Or would you like a wife who provides for your family so you can stay home? Shamefully, more and more young men are answering yes to those questions.

If you want to get married and be a provider for a family, that is a strong motivator to pursue a good education and a challenging career. If you have that high goal fixed for your future, you’ll have more ambition. You will approach life with focus and determination.

1 Timothy 5:8 says that you had better provide for your own house, or else you are “worse than an infidel.” That means that you had better be prepared to provide before you have a family. Devote yourself to a job out of a duty to your future family! Fulfill your role as a breadwinner.

As a character-filled, healthy, educated and hard-working young man, you will be in the minority. But you will be exactly what this world needs.

Fill your life with the goal of providing for your future family, and eventually providing for the whole world—God’s spiritual Family. Aim high!