Know Your Bible: Angels and Evil Spirits
Learn the truth about angels and evil spirits. Both have a profound impact on your life.
By Mark Jenkins • Dec. 31, 2017 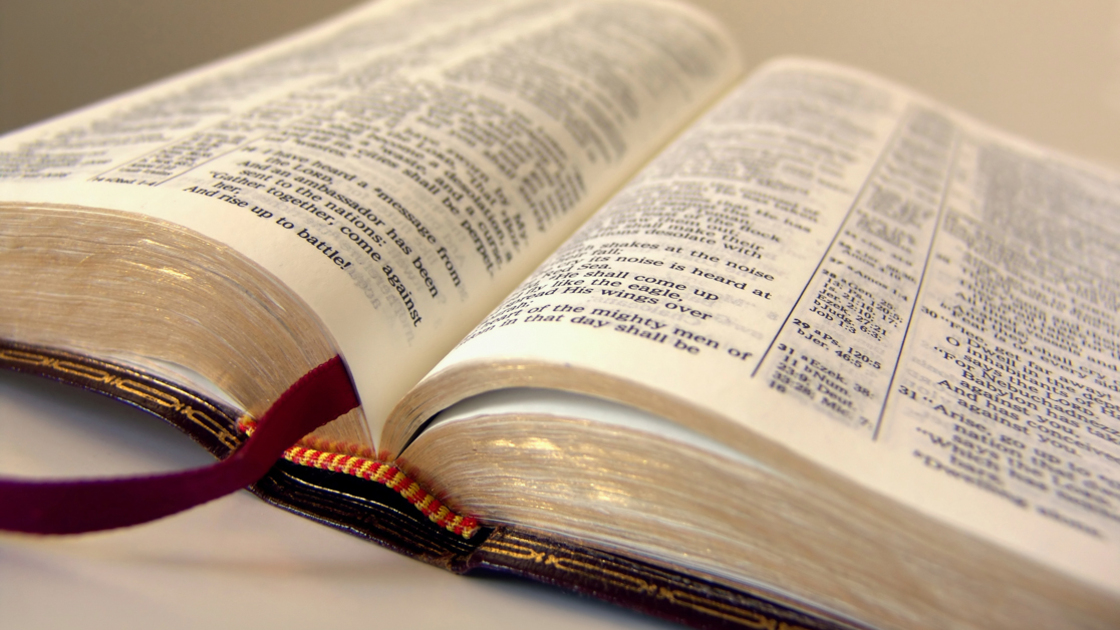 She sings like an angel. He’s a speed demon. Let me play devil’s advocate.

Words and phrases associated with the angelic realm are thrown around the English language so frequently, they can almost lose all meaning, or we can take the spirit world for granted—or mistake it as mythology and fable. Even in religion, people’s understanding of the angelic world comes largely from tradition and superstition. Mainstream Christians praise their “angels” and surround themselves with representations of little winged cherubs adorned with halos (or affix gargoyles to their church buildings to ward off evil spirits). On the darker side of popular culture, movie fans flock each October to see the latest gory horror flick, hoping for a good scare. But despite all this fascination, there is no real knowledge of the spirit world—and how dangerous that is!

You are living in a world with a super-powerful fallen demon as its head—the god of this world (2 Corinthians 4:4). That knowledge is critical to you as a teenager in God’s Church! A close study of the Bible shows us that the spirit world is more real than the physical world we see around us. Herbert W. Armstrong, the one whom God used to “restore all things” (Matthew 17:10-11), devoted an entire chapter to this subject in his most important book Mystery of the Ages. These powerful spirits, both angelic and demonic, have a profound impact on your life; let’s understand the truth about angels and evil spirits.

Mr. Armstrong attributed the mystery surrounding the spirit realm to the invisibility of the beings who compose it. Human beings, composed of physical matter, rely on the five senses to establish their understanding of reality. But despite our inability to see these beings, the invisible spirit world is more real than the visible world. In Mystery of the Ages, Mr. Armstrong compared that unseen realm to electricity—most people could not explain to you exactly what it is, but they would not question its existence.

The same God being who created the physical Earth we see around us—the Word—created the angelic host. But when did this creation take place? Genesis 1:1 describes the simultaneous creation of the heaven and the Earth. The angels were already present for this, and they shouted for joy as they looked at their new home—the Earth (Job 38:7). Because God created them, they are referred to as “sons of God.” God created each angel individually. However, as Hebrews 1:5 states, God has not begotten the angels as sons—He is not their literal Father in the way that He is our Father. He is their Creator.

Mr. Armstrong explained in Mystery of the Ages that the business of the God Family is creating. Christ said that both He and the Father work! (John 5:17). To aid them in this family business, they created lesser beings—still composed of spirit—to help with the work. Yet unlike men, angels are immortal, and do not marry or reproduce (Matthew 22:30).

As God revealed through Mr. Armstrong, God created the material universe to be a testing ground for the angels. God can create supreme, awesome beings, but the one thing—the only thing—that God cannot create by fiat is perfect righteous character. That character can only be developed. The being must consciously choose to surrender completely to God and obey Him. Because of this fact, God created angels with a mind capable of choosing between right and wrong. They are not mere robots built for mindless servitude, but beings with free will who are capable of obedience or rebellion. For this purpose of character development, God created a physical universe for the angels to govern.

Satan and His Demon Army

Lucifer, who had been trained at God’s throne, was the pinnacle of God’s creation. He was perfect at his creation, with profound skills in music. Isaiah 14 and Ezekiel 28 both explain that his mission was to administer the government of God on Earth, and he was given one third of the angelic host to perform this responsibility (Revelation 12:4). For an unknown period of time, Lucifer fulfilled his government position well. But as all three of these biblical passages show, something sinister happened. Over time, he allowed greed and vanity to enter into his mind and fester. Once a perfect being, he became evil and turned against his Creator. He convinced all the angels under his command to follow him in his rebellion. Thus, Lucifer became Satan the devil, and the rebellious angels became demons.

2. What was the result of Lucifer’s rebellion? Genesis 1:2.

The Earth was beautiful and perfect before the rebellion. Genesis 1:2 describes a very different Earth than what God created; God does not create things in a state of destruction and decay. The angelic rebellion caused the Earth to become severely damaged and “was without form, and void.” The word was appears in other verses such as Genesis 19:26, and means became. Clearly something happened between the creation of the heaven and Earth in verse 1 and the formless, void Earth of verse 2—the angelic rebellion.

Satan retains the rulership of this Earth. Jesus Christ has qualified to replace him and will take control of Earth’s throne at His return—but today, Satan remains as the god of this world.

It seems that everywhere we look, we see evil. Nightly news broadcasts are brimming with accounts of murder, rape, deceit, lust—every imaginable way that God’s laws can be broken. God cannot create evil (Mark 10:18); when the Word rested from the physical creation, He called it very good (Genesis 1:31). All of this evil has come from Satan and his demon army.

He is called the “prince of the power of the air.” Mr. Armstrong explained Satan’s power this way: “This great and powerful being, even though evil, has power literally to surcharge the air around this Earth. He broadcasts!

“Wherever you are as you read these words, chances are there are voices and perhaps music in the air around you. A radio or television set tuned to the right wavelength would make them audible to you.

“In a word, the selfishness, hostility, deceitfulness, wickedness, rebellion, etc. that we call ’human nature’ is actually Satan’s nature. It is Satan’s attitude. And broadcasting it, surcharging the air with it, Satan actually now works in the unsuspecting all over the world today! That is how Satan deceives the whole world today (Revelation 12:9; 20:3)” (Human Nature—Did God Create It?).

Many scriptures show that the angels who sinned are still active today, still under Satan’s command and working to undermine God’s plan for humanity. The Greek word for “principalities” in Ephesians 6:12 can be translated “the first place, principality, rule, magistracy … of angels and demons.” The word for “rulers” literally means Satan and his demons!

Two thirds of the angels remain righteous, and Scripture reveals much about them as well.

Two types of angels the Bible specifically identifies are cherubim and seraphim, both of which are higher in authority than what Mr. Armstrong termed “simple angels.” The highest-ranking cherubim are also called archangels. Only three archangels are mentioned by name: Lucifer, Gabriel and Michael.

The archangel Michael is a warrior. Scriptural passages show that he has done battle with Satan on several occasions—conflicts that stem from his commission to protect and minister to God’s Church (Revelation 12:7) and the 12 tribes of Israel (Daniel 12:1; 10:2-13, 21).

The archangel Gabriel is often seen delivering important messages. He appeared to Daniel twice (Daniel 8:16; 9:21), to Mary, the mother of Jesus (Luke 1:28), and to Zecharias, the father of John the Baptist (Luke 1:19).

Cherubim serve at God’s throne (Psalm 99:1), and we can see them described in Ezekiel 1, 9 and 10 as powerful, four-faced creatures with four wings who transport God’s throne.

Seraphim also serve at the throne, and their main purpose is to praise God. They have six wings (Isaiah 6:2). While there may be some angels who have no wings, contrary to popular belief, no scripture reveals a type of angel with two wings!

Descriptions of God’s throne room (Exodus 25; Revelation 4) show that there are also special groups of angels—beasts and elders—specifically dedicated to serving God the Father and Jesus Christ in the Father’s throne room.

Angels are constantly traveling around Earth observing and reporting back to God everything that happens (Revelation 5:6; Zechariah 4:10; 2 Chronicles 16:9). Many are messengers that report to God’s prophets, apostles and chosen men. Some angels are responsible for handling our prayers (Revelation 5:8; 8:3-4). Righteous angels always do exactly what God assigns them to do—nothing more, and nothing less.

Some angels are tasked with the protection of human beings. In the Blessing of the Little Children ceremony at the Feast of Tabernacles, ministers specifically pray for angelic protection of the sanctified children of baptized members. Acts 12:15 shows that the Apostle Peter was assigned at least one angel.

In the Old Testament, there are 15 recorded encounters with angels. Daniel saw an angel five times. Zechariah saw an angel seven times. The angels are almost always associated with a great crisis or some spectacular event. When angels are on the Earth, their main responsibility is to defend, help, bless and watch over God’s people. Most of the time, they want God to receive the credit for that. The righteous angels don’t want the glory at all. Righteous angels only appear to humans when God instructs it.

5. How many righteous angels are there? Revelation 5:11.

While we don’t specifically know a total number, this verse shows there were 100 million angels just around God’s throne on this particular occasion! When Elisha asked God to open the eyes of his servant, there were spirit armies on the mountain (2 Kings 6:15-17). Matthew 26:53 shows that Christ had power over “more than 12 legions of angels.” A full-strength legion in the Roman Army had 6,000—so Christ had immediate access to more than 72,000 angels!

No—God the Father does that Himself through His Holy Spirit. When angels do deliver a message, they aren’t teaching anyone. They administer a physical service, and then they are gone. The demons would love to engage in a spiritual conversation, but the righteous angels wouldn’t dare do that. The righteous angels are so fascinated with what God is doing that they desire to look in on us (1 Peter 1:12). When you go to services, there are probably more angels in the room than people!

No, we are promised rulership over the angels. When we are born as Sons of God, they will serve us the way they serve our Father today. Today, we are made a little lower than the angels (Hebrews 2:7), but soon all things will be put under our feet!

Angels are incredible beings with an incredible purpose. Studying them should show you how critically you need protection from Satan and his demon army. It should also show what mighty resources God has devoted to your protection if you rely on Him. Most of all, you should see that, however fantastic the abilities of the angels may seem to be, your potential is far greater—and they are excited about what God is doing with you!

For more on the mystery of angels and evil spirits, read chapter 2 of Mystery of the Ages here.