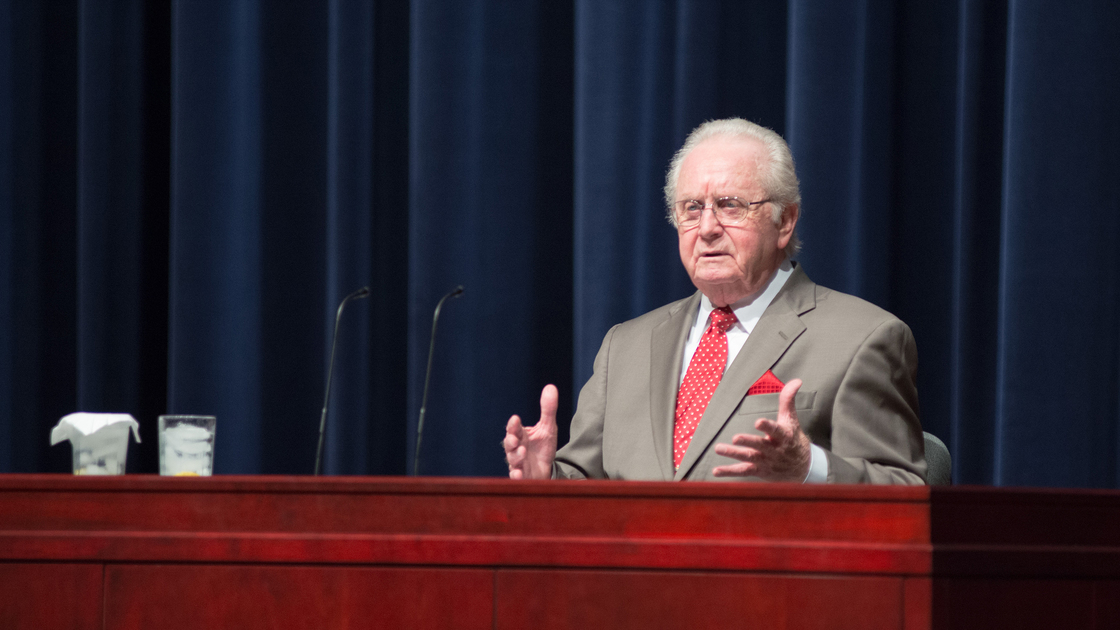 After sunset on October 4, Mr. Flurry gave a live opening night Feast message at Armstrong Auditorium in Edmond about the book of Haggai. He called the vision of the Feast the solution to the many problems plaguing the world, including hurricanes, wildfires, mass shootings, and threats of nuclear strikes. He encouraged pcg members to keep their first love and to hunger and thirst for righteousness, challenging them to not let a single word fall to the ground, and to have a Feast that “shakes the heavens and the Earth,” as Haggai 2 states. At 15 other pcg festival sites around the world that night, members watched a previously recorded version of the same message.

On Day 1, Mr. Flurry gave an extra-length sermon during the morning service and then an offertory message in the afternoon. In the sermon, he detailed the emerging problem of depression in America as a result of prescription drug addiction and the recent spate of mass shootings. Now is a transition stage for the throne of David, he said, from the British royal family, through the pcg, to Jesus Christ. He drew a parallel between the pcg possessing the new throne of David during a dangerous, pressure-packed end time, and a mother on the verge of giving birth. The transition stage, the baby’s descent from the womb, is the hardest yet shortest part of labor, he said. It is a time of peak vulnerability for the mother as she becomes desperate for a way to escape the agonizing pain. Mr. Flurry exhorted the brethren to have that same urgency and the same hope that birth into God’s Family is just moments away.

The message concluded with eight reasons why God’s loyal people are called sons of Zadok:

1. They cling to The United States and Britain in Prophecy.

2. They continue the dig in the City of David.

3. They are spiritual Jews who never lose the Key of David vision.

4. They continue to let God deepen that vision.

5. They continue to follow Herbert W. Armstrong, who taught the truth about David’s family throne.

6. They have staged musicals about Jeremiah and David, both of which focus on David’s throne.

7. They do all they can to proclaim the Key of David message to Israel and the whole world.

8. Is it also because they have the new throne of David?

On Day 4, Mr. Flurry delivered another extra-length sermon. He reviewed the revelation he announced in January about the Church possessing a new stone of destiny and a new throne of David, calling it a “radical leap” for the Church. He said the new stone, Mr. Armstrong’s prayer rock, is “so special” that it’s described in detail in the Autobiography, and said it’s “more inspiring” than Malachi’s Message.

Mr. Flurry finished with an admonition to keep the standard high as God’s royalty, asking, “Would God give the throne of David to people who don’t submit to His government?” He pointed members to the example of Ezra, who established God’s law in Jerusalem, and Zadok, who was a warrior in charge of warriors.

After traveling to Edstone, England, aboard the pcg’s private jet on Day 6, Mr. Flurry gave the sermon on Day 7. At the meeting hall several miles down the road from the Edstone pcg campus, he spoke about the Holy Roman Empire and its prophesied punishment of God’s rebellious Church and the nations of Israel. He emphasized the previous resurrection of the Holy Roman Empire under Adolf Hitler and focused on the source of Hitler’s motivation: the empire’s crown jewels, which were housed in Vienna, Austria. It was in Vienna that Hitler became “a fanatical anti-Semite,” Mr. Flurry said. Charlemagne, leader of the First Reich of the Holy Roman Empire, possessed these crown jewels. So did Hitler, who led the Third Reich. Mr. Flurry said that European leaders today point back to Charlemagne only because too many people remember the atrocities of Hitler.

Mr. Flurry quoted Britain’s Winston Churchill, who said in 1924 that Germany “smolders with dreams of revenge.” Karl-Theodor zu Guttenberg’s recent attacks on President Donald Trump expose him as a man with unnatural revenge in his heart, Mr. Flurry said. The Nazi underground understands that America was responsible for defeating Germany in World War i and World War ii, he said; next time, the revived Holy Roman Empire will wipe out America first.

It takes just one man to stand up and fight for what is right, Mr. Flurry said, referencing Churchill’s refusal to make a deal with the Nazis. King George vi preferred the compromise approach of Chamberlain and Halifax, making David’s throne a disgrace, Mr. Flurry asserted. It is no wonder that God took the throne from the British royal family, he said.

Mr. Flurry finished by showing how world events are moving fast, and how God’s people should be doing the same. Soon, he said, God’s people will marry Jesus Christ, sit on David’s throne, and rule the Earth and universe forever: “What could be more wonderful than that?”

Mr. Flurry gave his final sermon on October 12, the Last Great Day. He adapted the message from similar sermons that he delivered in Edmond on September 2 and in Vancouver, Wash., on September 21 during the Feast of Trumpets. This time, the message focused entirely on Matthew 24:1-2, verses that prove the Wailing Wall at the Temple Mount in Jerusalem is not part of the ancient temple site, contrary to popular belief. Mr. Flurry said afterward that this latest version of the sermon had a more positive focus than the previous two.

The Ezekiel temple will be built in the Millennium at the site of the former temples of David and Zerubbabel, Mr. Flurry said, before God replaces it with New Jerusalem. The Jews don’t have this incredible vision because they are distracted by the Wailing Wall, which is just a part of an old Roman fort, he said. God will dwell with humanity after the Millennium, when sin will be non-existent. That, Mr. Flurry said, will be just the beginning.