Why It Is Named Herbert W. Armstrong College
The meaning behind the name is a witness to this world!
By Gerald Flurry • November 2009 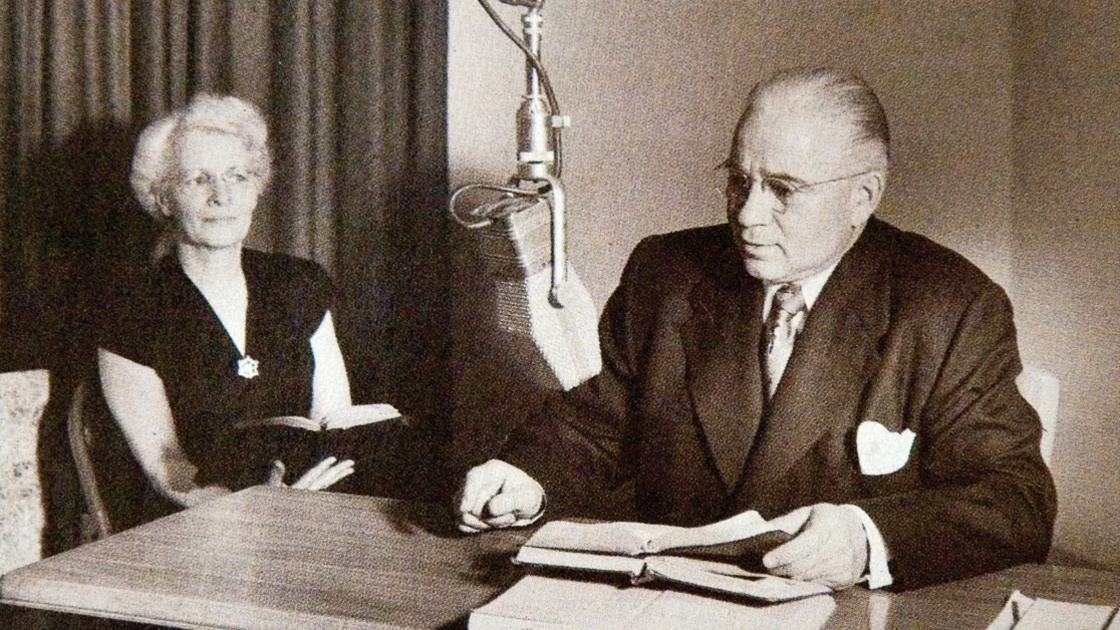 The organization that sponsors this website also sponsors a private liberal arts college. Why is our college named Herbert W. Armstrong College? We had many different names to choose from. When the college began in 2001, it did not seem like the best name; I felt that people would say we were focusing on a man. But I feel God basically imposed that name on us. He inspired us to change the name of His college to Herbert W. Armstrong College. Why?

A curious person who comes into contact with our college might know nothing about Mr. Armstrong. But they would see that name and have to ask themselves, “Who is Herbert Armstrong? What is that college about?”

If they followed up, they would find the living God!

Has there ever been a better college name? The meaning behind that name is a witness to this world!

Haggai 2:9 says that the “glory of this latter house shall be greater than that of the former, and in this place will I give peace.” That refers to the physical house of God, and it is in the present tense. Philippians 4:7 shows that this is a wonderful spiritual peace. It means peace in families, peace in the world, peace every place.

In Armstrong Auditorium, we will hear the best of the human spirit. Nobody in this world understands the truth about the human spirit. They believe in an immortal soul or in nothing but the physical and material. But God revealed to Mr. Armstrong that there is a human spirit that allows us to connect with God!

Human life without God doesn’t come close to the spiritual peace God gives us today. Nobody understands that peace. The reason we do is because God said He would make Zerubbabel a signet (Haggai 2:23). God personally chose a man to make His signet, a seal of authority that is the legal equivalent of God’s own signature. This was a very special servant of God.

If you understand Zerubbabel and his work, then you know where God is!

“Herbert W. Armstrong College” must mean something to you. It is not just a name. It is the most important college name ever!

Zechariah 4:6 describes how Zerubbabel succeeded: He learned how to use God’s Holy Spirit. Look at his fruits: He really knew how to build! If we falter, it will be in this area. This is a college where God’s Spirit has to flow, or we will not get the job done.

Verses 6-9 say that nothing can stop God working through this man. Mr. Armstrong built and finished the project God gave him to do: building the temple. “For who hath despised the day of small things?” (verse 10). Today, that legacy is a small college in Edmond, Oklahoma, but God’s colleges are about to spread all over the Earth! This is only a small beginning!

Revelation 3:1-6 talk about a church that had “a name that thou livest, and art dead.” Churches die. Sardis died. Colleges die. Ambassador College died. Armstrong College can die—or it can thrive if we are determined to make it do so through God’s Holy Spirit.

Zerubbabel had a plummet. He measured spiritually—mathematically, scientifically, precisely. Mr. Armstrong wrote, “Brethren, has that been done by this Church? Did God raise up a one-man leadership to be used by Him in building the spiritual temple, in proclaiming after 1,900 years the true gospel of the Kingdom of God in all the world, to even go to kings and heads of nations, in bringing the Church back to the faith once delivered? Has this happened in your days? Has God brought you into this prophetic fulfillment as a part of it? Has anyone else done it?” (co-worker letter, March 19, 1981).

He built the temple. Others tore it down. And here we are raising it right back up by following his example.

At God’s college today, we are not trying to do anything original. We are carrying on the traditions that God established before. We are trying to follow what Mr. Armstrong did, adding the revelation that God has given.

Revelation About the Human Spirit

I remember when Mr. Armstrong began teaching to the Church the truth about the human spirit, which God had revealed to him. It wasn’t an easy thing to understand; it was a great miracle from God to reveal it. There was confusion on this in God’s own Church, even among the ministers. Eventually, we came to understand this truth very well.

Without that spirit, God cannot work with us! His Spirit doesn’t work with animals or anything else but man. His Spirit connects with a spiritual component in man.

In Mystery of the Ages, Mr. Armstrong asked, “What is the real value of a human life?” He answered, “Science and advanced education today almost universally assume nothing exists but matter. They deny the existence of spirit. Which is to say, whether admitted or not, they deny the existence of God. … We learn that the human brain exercises many functions impossible in animal brain, yet we learn there is virtually no significant difference, physically. The animal cannot think, reason, study, make decisions apart from instinct. It cannot know what the human knows. It does not have attitudes of judgment, wisdom, love, kindness, cooperation, nor is it aware of competition, conspiracy, envy, jealousy, resentment. It has no appreciation of music, art and literature. It has no spiritual qualities or characteristics. Yet science and higher education insist the faculty of intellect in humans is solely physical.”

None of the scientists or leading scholars then or today believe in the spirit in man! Many of them say that what is in our brains and our minds is only material, and nothing else. They reject everything spiritual when they do that.

The human spirit is the essence of the human mind. Without it, how would Genesis 1:26 be possible? There, God says, “Let us make man in our image, after our likeness ….”

God can take that human spirit and add His Holy Spirit, and a person has peace come into their lives, a peace that passes all understanding! No matter how much knowledge man has, without God’s Spirit we don’t have understanding; we remain ignorant of the answers to life’s most important questions.

When this truth was revealed to Mr. Armstrong, it disturbed the Church in a way, because we really had to study hard to understand it. Today, that understanding of our very potential is the only thing that makes sense. What kind of value do you put on that? All the great educators and scholars would just scoff at that, yet it’s so simple to understand for the people of God.

Always keep in mind how we came to know that truth—and from where we got it.

The Spirit in Architecture

I believe Frank Lloyd Wright was the greatest architect ever in America. He knew there was a spirit in architecture. “We know that the interpretation of life is the true function of the architect,” he wrote, “because buildings are made for life, to be lived in, and to be lived in happily, designed to contribute to that living joy and living beauty. Now looking backward at the old order, it comes to this, does it not, that instead of going to the fountainhead for inspiration, instead of going to the nature principal by the way of our trust in life and love of life, going there for inspiration and for knowledge, where have we been going? Going to the armchairs of universities, going to their hallowed, musty books, going to the famous armchair men who were tutored by armchair men themselves, famous offsprings of the armchair.”

That’s a pretty good statement from a man who possessed only the human spirit. And that’s a reasonable definition of education as a whole: musty armchair knowledge. Wright understood a lot about nature and creation. Incidentally, he never studied architecture in college.

Mr. Armstrong never went to college at all, and he raised up three of the most beautiful colleges in the world, and the only ones that were spiritual. And he taught us about the missing dimension in education. He taught us what true education is. The fact that God used a man who never attended college to raise up three colleges says something about what God thinks of education in this world.

Frank Lloyd Wright said architecture should be a “festival for the eye”—beautiful and uplifting.

In Armstrong Auditorium, we have beautiful chandeliers with Austrian Schwartz crystal. We have onyx and candelabra from Iran. We have a swan sculpture from England. We have a spring-fed lake next to it, and we have flowerbeds and plants and trees growing all around. Going into that building is a real festival for all the senses—bringing all the arts together.

Wright talked about architecture being prophetic—for life, for uplifting life in the future, making people happy and delighted to be inside a building. That is what we are striving to achieve on this campus: to make it a small foretaste of the wonderful World Tomorrow. This land is a prophecy!

The physical and the spiritual all tie together in harmony. When you bring it all together, nothing else will stir your imagination quite like it. It was all created by God! It is all orchestrated to lift the spirit of man.

We Know by the Name

Revelation 10:11 says that an office has to prophesy again. Mr. Armstrong did it the first time, and now God tells us to raise up the Work and do it again, adding the new revelation. That must begin with our being grounded in what God taught through Mr. Armstrong and what God is teaching today.

Just the name Herbert W. Armstrong College tells us that there was a powerful work on this Earth that God Himself established. Mr. Armstrong restored all things. We know by that name what was torn down by the Laodiceans of this age. There are people here by that name who have raised up those ruins and are raising them up by the power of God—and those people are called God’s very elect.