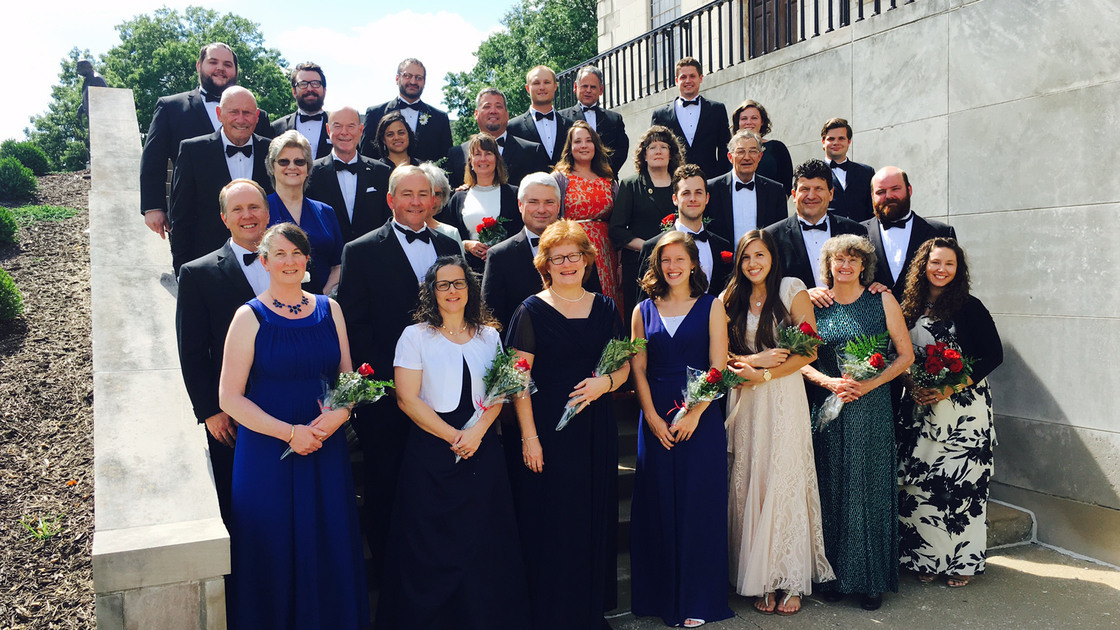 MISSOURI—Fifteen members of the Columbia Spokesman Club hosted a ladies gala on June 19 on the campus of Westminster College in Fulton.

The venue provided a historically rich backdrop for the final meeting of the Club season. Club president Randy Woemmel suggested the campus as the site of the gala due to its unique association with Sir Winston Churchill. In 1945, Mr. Churchill gave his famous Iron Curtain speech in Westminster College’s gymnasium while U.S. President Harry S. Truman, a Missouri native, sat in attendance. The college has since erected the National Churchill Museum to honor and memorialize Churchill’s life as well as that historic postwar speech. A guided tour of the museum kicked off the ladies gala.

“With so much negative sentiment these days towards Winston Churchill and the British Empire,” Club secretary Mark Arnfield said, “it was refreshing to see the respect and genuine admiration exemplified by the museum and by our enthusiastic tour guide.”

The tour of the museum featured many aspects of Churchill’s life, including his childhood, his wartime experiences and his hobbies and talents. “I was impressed that Churchill was such a good painter and was photographed laying bricks in a suit,” Club guest Carol Aubrey said. “It was noted that he hated not only what the Germans did but also what happened to them. He really had a love of humanity.”

Once the tour ended, the first half of the gala commenced with a table topics session. One of the topics that brought many members and dates to their feet involved Father’s Day and examples of quintessential fathers. The women provided personal anecdotes of their fathers or husbands. Assistant Club director Eric Anderson gave the first-half evaluation.

“It was refreshing to hear many of the ladies were experiencing their first gala,” Missouri member Jennifer March said. “You could sense their excitement.”

After lunch, five speakers used humor to tie together their speeches. The diversity of the Club experience allowed for an assortment of speech types, ranging from two no. 4 Add Color speeches to a no. 6 Stir to Action speech to two graduate-level Humor speeches.

“It was enjoyable to speak in front of a mixed audience of both men and women,” said Club sergeant at arms Cody Murphy, a first-time Club member. “There was more life in the crowd, which provided a nice boost of encouragement.”

Mr. Woemmel, the Club president, noted marked improvement in all the members. “More than the previous Clubs, the men were more committed,” he said. “They stayed through the entire season and were eager to do their assignments and participate.”

Club director Cal Culpepper evaluated the second half of the Club session by giving encouraging feedback to the speakers. His closing lecture focused on the faith it takes to move mountains. He reminded attendees that God’s Work is accelerating forward and that members must stay stirred and fervent.

Club members presented to Mr. Culpepper and Mr. Anderson a relevant gift: a bronze bust of Sir Winston Churchill for each.