The Goal of Our Work
We are getting ready to help Christ rule this world and the universe!
By Gerald Flurry • June 22, 2017 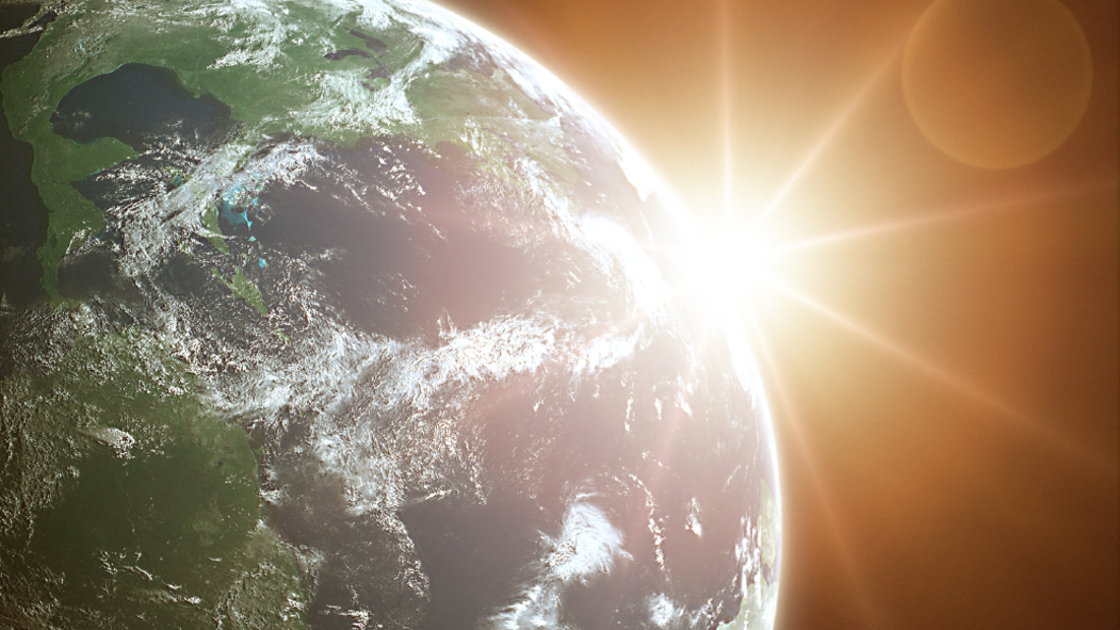 A God from the northern heavens came to Earth and became flesh and blood, risking the loss of eternal life. Failure would have left the Father as the only remaining God forever.

Spend more time and ponder what failure would have meant to our Father—the rest of eternity spent as the only God in the universe! Then you can better comprehend the kind of love He has for His creation.

Can we fathom this loving sacrifice by God? This universe-shaking truth challenges our imagination. We are the recipients of this unparalleled act of love.

An “eternal life,” which was God, the Word, came and died for us. This ought to excite mankind beyond anything we can imagine. It was the beginning of what will probably become billions of sons in God’s Family.

Because we teach this God-ordained message, we are almost glutted with new revelation! This should show us what this message means to the Father and the Son. Revelation comes because we honor our Father and Husband.

The deepest kind of UNITY comes from God. This is the unity God and the Logos have had for eternity. And it is the only future life there is. Every­thing else is about eternal death!

The 12 disciples saw, touched and handled this Word—God in the flesh. John says they were overwhelmed with joy. They understood how God and the Word became the Father and Son—and what that means to every human being.

The goal of our work is to bring all humanity into fellowship with the Father and Son! Please read that again.

We are the very elect of the firstfruits. Soon the whole world will be filled with second-fruits from the fall harvest. All mankind will have one mind, one faith, one love and one hope. Each person will be a witness for God!

This is not a limited human vision, but an UNLIMITED GOD VISION. This vision erases all racial hatred and national boundaries. We all become one Family of God.

What a stirring future! It doesn’t get any deeper than this. I hope you will prayerfully study these epistles of “the disciple whom Jesus loved.” Then you will see how Christ was ­loving all of us through John.

A Family of Joy

Fellowshiping with the Father and Son never leaves you discouraged or negative! Just the opposite. It brings you alive as never before. (1 John 1:1-5)

Is God discouraged? Joyless? Negative? Never! We must receive and develop the God Family Spirit! This fellowship has worked for all eternity. So we know it will work now—or anytime.

Having this vision is how we rejoice in fiery trials. We know that our ­resurrect­ion to eternal glory is extremely close. It’s so real that we can rejoice in our worst trials. This is how we have full joy.

Do people see you as this kind of person? Do you have full joy? (This doesn’t mean, however, that we don’t have pain and don’t fight against depression at times.)

The Apostle John was full of joy, even as most of the members were sad and falling away. He kept right on being a witness for the Father and Son, even when he was imprisoned.

In physical families, we can see a measure of joy. But it is tiny compared to our God Family—fellowshiping in full joy.

These first five verses have unfathomable depth. This is the message John got from the Logos. He began to declare it, and so must we. What is revealed by our Father and His Son, we must proclaim. The message is jam-packed with hope.

Meditate on verse 1. It is first for emphasis. This beautiful verse must be studied, meditated on, and prayed about if we are to comprehend it.

Herbert W. Armstrong College is here to get this message to the world. This message is for the whole of mankind. It produces the opposite of the negative fruits you see in Satan’s world.

The Laodicean Church members broke down in this area. Satan destroyed their desire and strength to be witnesses. Then they no longer wanted to declare the Father’s message.

We are declaring John’s message as quickly as we can. The job of our ministers is to help get our people 100 percent behind God’s work—so we can complete this work as speedily as possible. We are in THE LAST HOUR! We must work while we can, BEFORE this world is plunged into the Great Tribulation.

I visited with Joe Tkach Sr. in 1988. He told me then that the Worldwide Church of God had changed its focus to be on Ambassador College. He no longer desired to spread the message Mr. Armstrong taught to the world. The new Church leadership no longer focused on God’s commission and Work. The college became an end rather than a means to an end.

Now Ambassador College is dead. And the Worldwide Church of God no longer proclaims an important message to the world, as Mr. Armstrong did for over 30 years. By comparison, it virtually has no work at all! And even that is only a polluted residue of God’s Work through Mr. Armstrong!

When we were first called, most of us were so excited and joyful about God’s message that we talked about it to anyone who would listen. Soon we discovered that God was not calling those people yet. Sometimes we brought persecution on ourselves.

However, the emotion was good. We should all be channeling that emotion into God’s Work, as John did. We must yearn and passionately desire to declare our message of joy so everyone has a chance to repent. We should be so full of joy and excitement for this message that we feel inspired to support it.

Keep that emotion and use it to ­support this message. We should be moved and stirred to share this ­magnificent vision!

If people don’t accept our message, Christ will still help many of them to repent when all the Bible prophecies come to pass in the Great Tribulation and the Day of the Lord.

We must see that this message is everything to a dying world! It must be declared now—in this “last hour.” It is a message from the Logos, who was with the Father.

God sent an Elijah to restore all things. It was an astounding message not heard around the world for almost two millennia!

And from the early college days to the end, Mr. Armstrong had outstanding, God-inspired spokesman clubs. There were research and writing classes. The students were not there just to learn the message. They were also taught how to deliver it, both in this age and in the Millennium.

In Herbert W. Armstrong College, our students are taught how to write and speak like kings and priests. We have a message that must be communicated to all humanity!

Receiving God’s message is just half of the responsibility. The second part is communicating it. And what a communication job! This message must be delivered to every person ever born!

What good is the message if it is not declared and taught? What a failure if we don’t deliver our Father’s message! What a calamity. Now is the time to be a witness for God.

That is the purpose of this Work. We declare God’s message on television, in ­maga­zines, books and booklets and via the Internet—any means by which we can deliver it in a quality way.

Today, the media revolves around sports and entertainment—including vile music and pornography. It’s all about making money, regardless of any damage to our people. And it is inspired by the god of this world (2 Corinthians 4:4). Humanity is receiving the wrong message today.

The United States spreads its pornographic movies and obscene music around the Earth through the Internet. The world is becoming more and more addicted to evil until “the transgressors are come to the full” (Daniel 8:23). God will stop this global filth very soon.

America and Britain have the best technology in the world. We are better equipped than any nation has ever been to deliver a message. But our message to the world is dominated by the worst pornographic filth humanity has ever seen! It is America’s number one worldwide business! Depraved music is our number two export!

The world is full of violence and ready to explode into nuclear warfare. And America’s strongest messages to the world is the filthiest, Satan-inspired trash ever seen and heard!

At the same time, we ignore the Creator God who prophesies throughout His Word that He punishes for such despicable sins. Even the most violent terrorists can see and are offended by our unparalleled immorality. Surely we must believe that God would also be offended. But our people don’t care. We have descended into a kind of spiritual madness. Only the worst kind of punishment can ever awaken us. The Great Tribulation is going to be the worst suffering ever. The punishment fits the crime. Never was there a greater need to awaken!

The magnitude of the opportunity offered by our unparalleled technology makes our nations’ failure to take advantage of it incomparably disastrous. The whole world suffers mightily because of that failure. Never has there been a greater need for God’s message of hope.

We must give this world the only message that really matters. We will show them how to use the media.

Years ago, when the Soviet Union was strong, the Japanese were asked who they feared most. They answered that they feared Russia most militarily, but they feared America most culturally. (If only we could see ourselves as others see us.) And they had good cause for that fear. Today the Japanese are saturated with America’s vile culture. Our culture is destroying us and other nations morally and spiritually. We prate about how good we are and sing “God Bless America”—but God is cursing America, Britain and the Jews in the Middle East. He will continue to do so until we see our black sins and repent.

One of the main motivations for terrorists attacking the U.S. on September 11 was the impact of our sick culture on the Arab world. God can punish us through evil men. Remember, He raises up Assyria (modern-day Germany), the cruelest of nations, against a “hypocritical nation” (Isaiah 10:5-7). That nation is Israel—primarily Britain and America today. They are hypocritical—evil people who say they are good. We talk about how good we are, but spiritually we are the sickest nations on this planet—considering the physical blessings God has given us.

In the beginning of America’s history, its goal was to establish God’s rule on Earth. Would you like to compare that goal with what we have become today?

If only we would remember our ­history with God. When we refuse to learn from the past, we can’t see into the future. We lose the overview and become blind.

The Philadelphia Church of God has bought and paid for 170 acres and all of our buildings. What is it all for? We are getting ready to help Christ rule this world and the universe!

God has blessed us mightily. Now He wants to fire our imaginations to see what a marvelous, mind-staggering future this world has. We have the greatest, most complete message God has ever given to declare!

Like John, we must never lose this awesome vision of love! Then we must be a witness for God. This is what the world so desperately needs.