Lessons From History: God Protects
This list of miracles proves it
By Brianna Weeks • May 18, 2017 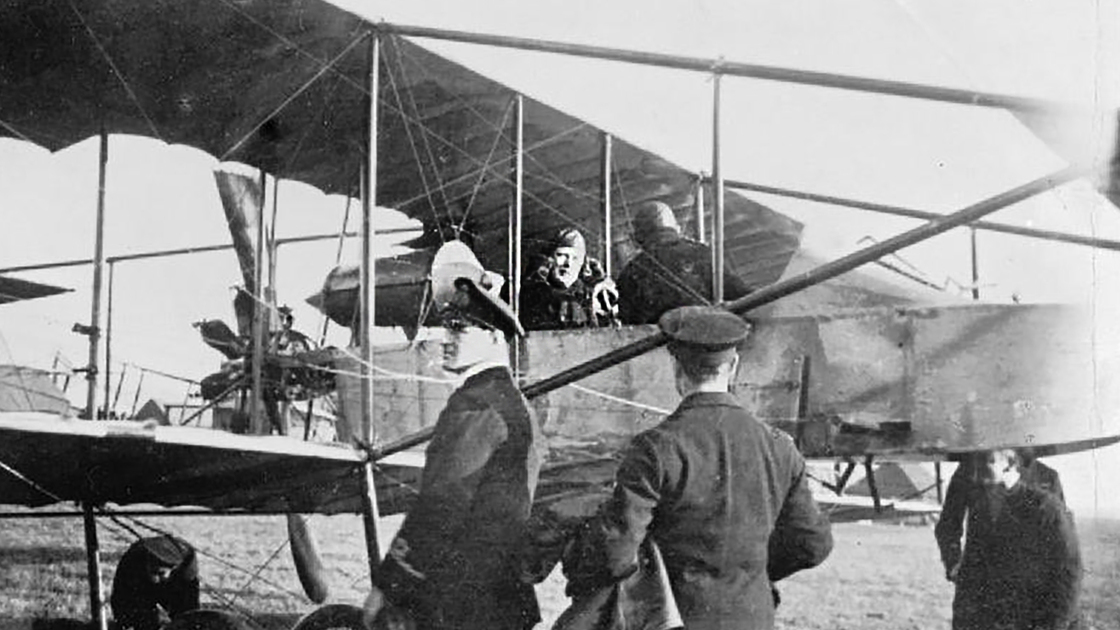 By Unknown - http://media.iwm.org.uk/iwm/mediaLib//38/media-38688/large.jpgThis is photograph CH 4779 from the collections of the Imperial War Museums., Public Domain, https://commons.wikimedia.org/w/index.php?curid=24290807

After his terrifying first flight in 1912, First Lord of the Royal Naval Air Service Winston Churchill grew to love flying—he even took piloting classes. He had many “delightful flights,” as he called them in his article “In the Air.” But it wasn’t all smooth sailing (or flying, I suppose). During the years before, during and after World War i, a laundry list of freak accidents that he narrowly missed made Churchill realize that he had been nervous about his first flight for a good reason. These accidents can also prove to us an important truth: God protects.

Churchill was first introduced to piloting in a dual-control airplane. This airplane was much like the car with an instructor’s brake that you’d use in Driver’s Ed—he could fly it, but any time he started to get nervous or lose control, the seasoned pilot sitting next to him would be ready with his own controls to take over the aircraft.

Churchill’s first flying lesson was a great success—he spent two or three hours in the air with an experienced pilot, and everything went smoothly. But it was only a day later when that same pilot crashed that same plane and died. If he had flown a day later, or two days in a row, Winston Churchill would have been dead as well.

This is what starts the list of accidents that Churchill just narrowly avoided—the list of miracles that proves that God protects.

Only a few weeks after that first incident, the second accident on that deadly list occurred. Churchill was testing out a new type of seaplane, and the plane worked perfectly while he used it. Later that same day, he heard word of the same plane: It had nose-dived out of control and crashed into the sea, killing all three officers inside.

Another time, Churchill was prevented from flying by the press. If he had been on the plane like he was planning, he would have been one of the men severely injured as the plane spun out of control and crashed into the ground.

Churchill was minister of munitions during the latter part of World War i, and this required him to travel frequently between France and Britain. He usually went by plane. One day, just as he and his pilot began to cross over the English Channel to get to London, they heard a sharp cracking noise. They began to descend as the engine shut down, and Churchill was left to wonder “how long I could keep myself afloat in my thick clothes and heavy boots, or whether it would be worthwhile to try to take them off.” He was certain that they would die.

But then, at the last second, the engine began to sputter off and on again. The pilot turned the plane around and headed back to France. They landed at a military station with probably about one hundred feet left in the dying engine.

This was the closest call yet, but Churchill didn’t let this frightening experience stop him—he simply found another plane later that day and headed off toward England again. They made it farther this time, but they still ran into trouble: As they flew over the English countryside, the same thing happened again—something in the engine cracked, they lost power, and the plane began to swiftly descend. This time, the pilot was able to force-land in a little field, narrowly avoiding branches that could have ripped the plane on either side. They survived by the narrowest of margins.

After the war, Churchill was secretary of state for air and war, and he found a need to fly more frequently than ever. He traveled often between London and Paris, where the postwar peace conference was being held.

One day, he and his pilot, Jack Scott, flew through storm clouds so thick that they couldn’t see the ground and quickly got lost. In an effort to get out of the dense clouds, they flew so low that they were in danger of crashing into a tree or hill at any moment. They broke out of the fog just in time to see that they were headed straight for a factory chimney. They swerved out of the way with moments to spare.

Later that same day, their plane caught on fire. Scott let go of the controls in order to put the fire out, allowing the plane to go into a stomach-churning nose dive. He regained control of the aircraft only 200 feet from the ground.

A few weeks later, Scott and Churchill were just taking off when their plane hit a wooden platform underneath them and flipped completely over. They were left dangling upside-down, saved only by the seat belts that strapped them into their seats.

The most harrowing incident in this series of unfortunate events happened in the summer of 1919. Churchill felt like flying for pleasure after a long day of work, so Scott took him up in a dual-control airplane. The flight started out normally, but soon after they took off, the plane stalled out. Scott took over the controls and tried to restart the plane, but it didn’t respond. The plane began to nose-dive.

Since they weren’t far off the ground yet, there was no hope of having the time and airspace to regain control. The plane crashed head-first into the ground, crumpling the nose and propeller and crushing the left wing. Miraculously, Churchill was able to stumble out of the plane and ready himself in case the plane caught on fire. He had to pull out Scott, who was unconscious. Their plane should have burst into flame, but it didn’t. Scott had turned off the electric current, which, if it had remained on, would have caused the gas to explode.

After that accident, which left Scott severely injured and Churchill covered in bruises, Churchill did not fly for recreation any more. He flew as little as possible, in fact. But that is beside the point. The point is: Churchill was repeatedly saved from circumstances that should have killed him. A single day was the difference between his life and death. A press conference stopped him from being in an injurious crash. He even did crash, and yet he was never severely injured. The list of chilling accidents goes on and on, and Churchill just barely escaped with his life every time.

God orchestrated it to be that way. Before the United States joined World War ii, Britain was the last nation to stand in Germany’s way. If it hadn’t been for Britain, Germany would have taken control of all of Europe, and it would have been able to branch out to take over the world from there. But Britain was never defeated by Germany, and that is, in large part, thanks to their strong leader: Winston Churchill. He was a constant pillar of strength in Britain during the war. He would not accept defeat. He would not surrender. God used Winston Churchill as His human instrument to save Britain.

But what if he hadn’t been alive? What if just one of those plane accidents had ended in his death? Britain probably would have been defeated—it would have surrendered. That wasn’t God’s plan for Britain, and it wasn’t yet time to allow Germany to control the world either. He needed a human being to work through in order to make sure that Germany was stopped.

The only explanation for Churchill surviving all those freak accidents is that God miraculously protected him. God had a purpose for Winston Churchill.

Now, Churchill knew nothing of God’s truth or His plan for mankind. He was just a carnal man, and his loyalty was to his country—not to God. He was deceived just like the rest of the world (Revelation 12:9).

We do know God’s truth; we do know His plan for mankind. We are carnal men, but we can have God’s Holy Spirit working with us—and eventually in us, once we are baptized—which allows God to overcome that carnality in us. We can be loyal to God, and we don’t have to be deceived. Churchill had none of these things, and yet God protected him. Do we believe God when He says that He will protect us? (Psalm 91:11, Psalm 34:7).

We probably all have stories of car accidents, nasty falls or dangerous storms—stories where we should have been injured or perhaps even dead. Instead, we are alive and well to tell those stories because God protects us. He protected Winston Churchill so that He could use him to save Britain. He will protect us so that He can use us to teach the entire world in the very near future. All we have to do is obey Him and believe Him when He promises to protect us.

Be inspired by the miracles God performed to save Churchill. Those events might have been accidents, but the many miracles by which God protected him most certainly were not. Let those miracles stir you to believe that God protects. And be thankful that He does!