Standing Up—and Standing Out
What two biblical teens can teach us about dealing with changes and challenges
By Deryle Hope • March 14, 2017 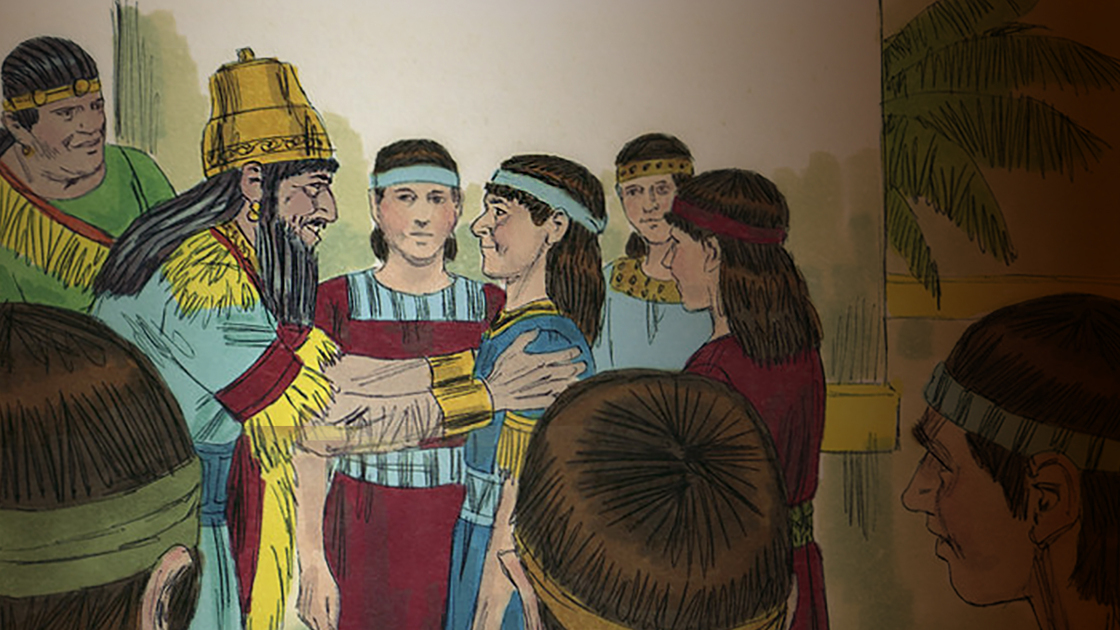 Every adult that you know has one thing in common: They were all your age once. Everyone goes through the same time of transition that you are experiencing as a teenager. It’s an unusual time of physical and mental change in your life—the transition from childhood to adulthood.

God gives us these stages of physical growth to teach us about our spiritual growth. The true Christian life is one of change. Our lives are all about change, the process of conversion—unlike in Protestantism, where the idea is that you can just come as you are and be accepted by Christ without changing your behavior at all.

The teenage years are fraught with change—physical, emotional and social. They are full of new challenges and new responsibilities as you enter middle school, high school and then college. They are the key years of your educational and foundational training. It’s not an easy time of life for any teenager.

But as teenagers in the Church, you face a double challenge: You have to go through these developmental years and be different from everyone around you.

With all of these challenges, it can be easy to think that no one understands. You might think, My parents just don’t understand. No one has had to go through the things I have to go through.

But the truth is, you are not the only one. Some of your parents have gone through similar experiences. But even if your parents didn’t grow up in the Church, however, you’re still in good company.

Think about this: All of the biblical men and women were teenagers once too. Many of them had to stand up and do some pretty scary things when they were exactly your age.

It’s easy to view the patriarchs, apostles, prophets, kings and other biblical characters as having always been adults. But virtually all of them went through dramatic, traumatic changes. Noah, Abraham, Moses, David, Esther, the 12 apostles—it’s easy to think that things were easy for them. But the Bible is all about change, and God gives trials to everyone He works with to help them grow.

Practically every biblical figure went through some pretty hefty trials in their life, but two of them in particular went through traumatic changes in their lives while they were teenagers. Like you, they were “in the Church,” so to speak; they had been raised by righteous parents, and they were taught spiritual knowledge just as you are. They had known God from their youth. They knew God’s way, and when they were thrown into challenging situations, they remained faithful to God and became shining examples for all of us.

The first of these young people was Joseph. He lived about 3,800 years ago, and he went through some incredible changes as a teenager that could have crushed him if he had not maintained the right attitude.

Genesis 37 covers the well-known story of Joseph and his brothers. Joseph’s brothers were envious of him because he was their father’s favorite son—the eldest son of Jacob’s beloved wife Rachel, who had died. Some of the brothers actually wanted to kill Joseph because they truly hated him. Instead, they threw him into a pit. One brother, Judah, suggested that they sell Joseph to Midianite merchants who were traveling past at the time. So Joseph was taken to Egypt and sold as a slave into the house of a high-ranking Egyptian named Potiphar, the captain of Pharaoh’s guard.

Consider the changes that Joseph endured in this short period of time. He went from being the favored son of a wealthy father and having a wonderful future ahead of him to being thrown in a pit, sold into slavery, taken to Egypt, and sold as a slave into a military household. There was a different language, a different culture—a totally different way of life. Suddenly, Joseph’s life had completely changed.

Genesis 39 shows that God did not forsake Joseph even in these trials: “And the Lord was with Joseph, and he was a prosperous man; and he was in the house of his master the Egyptian. And his master saw that the Lord was with him …” (verses 2-3). God was with Joseph—but Joseph was obviously with God as well. He observed God’s law; we know that because God blessed him and “made all that he did to prosper in his hand” (verse 3). Eventually, Potiphar trusted Joseph so much that he put him in charge of everything he owned. Now that he was prospering, Joseph continued to obey God. And when tempted by Potiphar’s wife, Joseph still refused to sin. How opposite that is to the way of this world! Teenagers today are quite content to wallow in promiscuity.

Even though Joseph refused to sin with Potiphar’s wife, he was sent to prison because she lied about the situation. This was another drastic change! Suddenly, Joseph was again taken from a position of power and prominence, and thrown into prison. Even in prison, God did not desert him; He gave Joseph favor with the keeper of the prison, who put everything in the prison under Joseph’s command (verses 22-23). Joseph remained there for two years—and then, another change came. Suddenly, after God revealed the interpretation of Pharaoh’s dream to him, Joseph became second-in-command to Pharaoh. God blessed Joseph everywhere he went because he was obedient and not afraid of standing out in order to follow the law.

None of us have had to undergo challenges like Joseph did. But Joseph remained faithful to God through all of it—and as a teenager! What a mighty example of a faithful young person!

Now, let’s move forward in time about 1,200 years and look at another teen who went through some difficult trials but still followed God. When the Babylonian King Nebuchadnezzar invaded Judah around 604 b.c., one of the captives he took with him back to his kingdom was a young man named Daniel. Daniel was a highly educated, highly skilled prince of the royal line of Zedekiah. He had been living a privileged life in the palace when, suddenly, Judah was overthrown, and he was taken captive to Babylon. Imagine the trauma of being taken captive from your home and taken hundreds of miles away—to Babylon, of all places. Babylon was the pagan capital of the world at the time.

So what did Daniel do in this environment? He took a stand on God’s dietary laws.

You can find this story in Daniel 1:8-16. Daniel and his three friends, as intelligent nobles, were given a privileged place in the Babylonian court; Nebuchadnezzar had them educated by his best scholars, and they were given a portion of the king’s own food. But Daniel knew that God did not approve of some of the foods that were eaten commonly in the Babylonian court; unclean meats were most likely consumed, and wine was the drink of choice. So Daniel asked the head of the eunuchs, who was in charge of the young men, if he would allow Daniel and his three friends to eat a diet of vegetables and water, which conformed to God’s health laws regarding unclear meats and was healthier as well. The eunuch was afraid that Daniel and his friends would quickly become thin and undernourished on such a diet, but he agreed to the request for a trial period of 10 days. After the 10 days, these four young men looked so much healthier than the other young men that the eunuch allowed them to continue with this diet.

This was actually a pretty dangerous request for Daniel to make. To the king, it might have appeared that he was showing ingratitude for the king’s generosity. The eunuch feared for his own life if the stricter diet did not work (verse 10). But Daniel wasn’t afraid; he risked everything just to keep the law of God. What a contrast that is to the mentality of many teens in the world today!

Daniel demonstrated the strength of his commitment to God’s law even in the small things—even in an issue that we might consider minor. Imagine how he would have acted in regard to the Sabbath or any of the other nine commandments! He was not afraid to stand out in Nebuchadnezzar’s court. He was not afraid to be different!

Once again, God was with Daniel throughout these trials. He gave Daniel favor because he and his three friends obeyed God by following His law (verses 17-20).

These two teenagers—Joseph and Daniel—experienced trials far beyond anything any of us have suffered. But despite having to endure such massive challenges and changes, they held on to their conviction to remain faithful to God and His laws. What a beautiful example for us!

If you ever feel like God is giving you too many challenges, changes or trials to deal with, think about the examples of these two young men—and the examples of so many others throughout the Bible. God did not promise that this would be the easy way, but it is the only way that will bring true happiness to your life—if you obey His law. Stand up—and stand out!