Lessons From History: On the Front Lines
How a meeting that never took place saved a life
By Brianna Weeks • Jan. 26, 2017 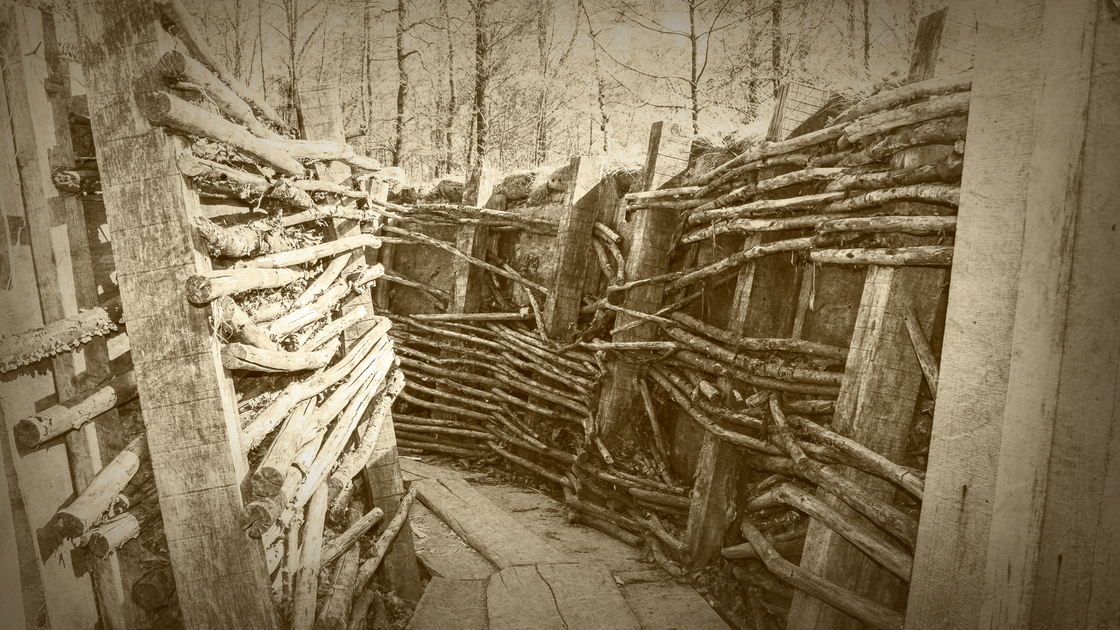 “The Corp commander wishes to see Major Churchill at 4 o’clock at Merville. A car will be waiting at the Rouge Croix crossroads at 3:15.”

This was a telegram Winston Churchill received as he was relaxing in his small shelter, taking advantage of the morning break in artillery fire from the enemy mere meters away. He had just begun to write a letter to send back home to England. Now he was presented with this new task, and he wasn’t too happy about it.

The little crossroads Churchill would have to get to was about 3 miles of muddy fields away from his semi-comfortable seat atop a sandbag, and he would have to walk those 3 miles completely exposed to enemy fire in the middle of the day. All things considered, Churchill decided that he would rather not budge from his cozy little sandbag shelter. The thin mud wall between him and the German lines was better than no wall at all! But orders were orders, so he grudgingly packed up his letter, stuffed his arms through his coat, and headed off with a grenadier (a soldier who handles grenades!) toward the rendezvous point.

They had traveled only about 200 yards before enemy shells began shrieking toward their trenches again—the bombardment had resumed. Churchill looked back to see the shells exploding into the trenches where he had just been, but he didn’t think much of it. Enemy attacks were a daily occurrence on the front lines. He quickly turned back to the laborious job of slogging through the deep mud. He had an important meeting to get to, whether he wanted to or not.

After a lot of slipping, sliding and sweating, Churchill reached the rendezvous point. He waited in anticipation for the commander’s car to come rolling down the abandoned crossroads and pick him up for the scheduled meeting. No car came.

He waited some more. Still no car.

He waited for over an hour, and finally, he spotted a staff officer walking toward him. The officer informed him that the car that was supposed to pick him up had driven to the wrong place, and that there was no time now for him to visit with the commander. He didn’t have to worry, however, for the meeting was not of great importance anyway—the commander had only wanted to catch up with Churchill and see how he was holding up on the front lines.

Or so he thought.

After expressing his anger, there was nothing left for Churchill to do but trudge back to the lines. As he began his journey, the sun inconveniently sank and left him in darkness. He promptly got lost and spent over two extra hours trying to find his way back to the trenches. When he finally arrived, he headed for the nearest company mess station to get a drink right away.

As the soldiers gave him his whiskey and water, they told him how lucky he was. Having just finished his miserable, all-day affair, he obviously didn’t agree with them. He expressed his disgust by making “some suitable remark about the impropriety of Corps commanders indulging their social inclinations at the expense of their subordinates.”

But as he traveled on from the whiskey station and farther into the trenches toward his original sandbag shelter, he began to understand what the soldiers had really meant.

Twenty yards away from his shelter, a sergeant stopped him and directed him to a new one. When he asked why and tried to walk toward the old shelter anyway, the sergeant told him what had happened. Churchill’s shelter had been hit by the shelling that had started back up as he was leaving the compound. Mere minutes after he had left his comfortable seat and cozy shelter, the very spot where Churchill had been reclining had been destroyed. The man who had been in there with him was dead. The shelter was a horrible mess. The shelling that he had thought nothing of earlier that day could have been the end of him.

All of a sudden, Churchill didn’t mind nearly so much that he had wasted his day in the mud and rain. He wasn’t quite so mad at the commander for blowing him off. That unimportant meeting that never actually happened had saved his life.

God saw when Churchill sacrificed his life for his country by joining the Army, and He knew that this was a man He could use to save Britain in the next war. God protected Churchill on the front lines of World War i—to save him for an even greater work during World War ii.

Our God is a God of miracles. The Bible is full of proof: The 10 plagues, each one destroying one of the Egyptian gods; the parting of the Red Sea, which brought the Israelites to safety and destroyed the Egyptians at the same time; fire coming down from heaven and consuming Elijah’s sacrifice; Elisha bringing a widow’s son back to life; David slaying Goliath; Jesus Christ turning water into wine; Peter walking on water. Protection, healing, deliverance—the list goes on and on! And now we have modern events to add to the list as well, such as this story of how God miraculously protected Winston Churchill during World War i.

Churchill later reflected on the events of that fateful day on the Western Front. As he thought about what had happened, he wrote: “There came the strong sensation that a hand had been stretched out to move me in the nick of time from a fatal spot.” It was nothing more than a “sensation” to him, however, for he didn’t know the true God. We do—and our belief in the God of miracles can be so much more than just a sensation. Be inspired by the miracles God performed to protect Winston Churchill and to save Britain. Study the miracles recorded in the Bible. Believe in the God of miracles—and you’ll see miracles in your life too!