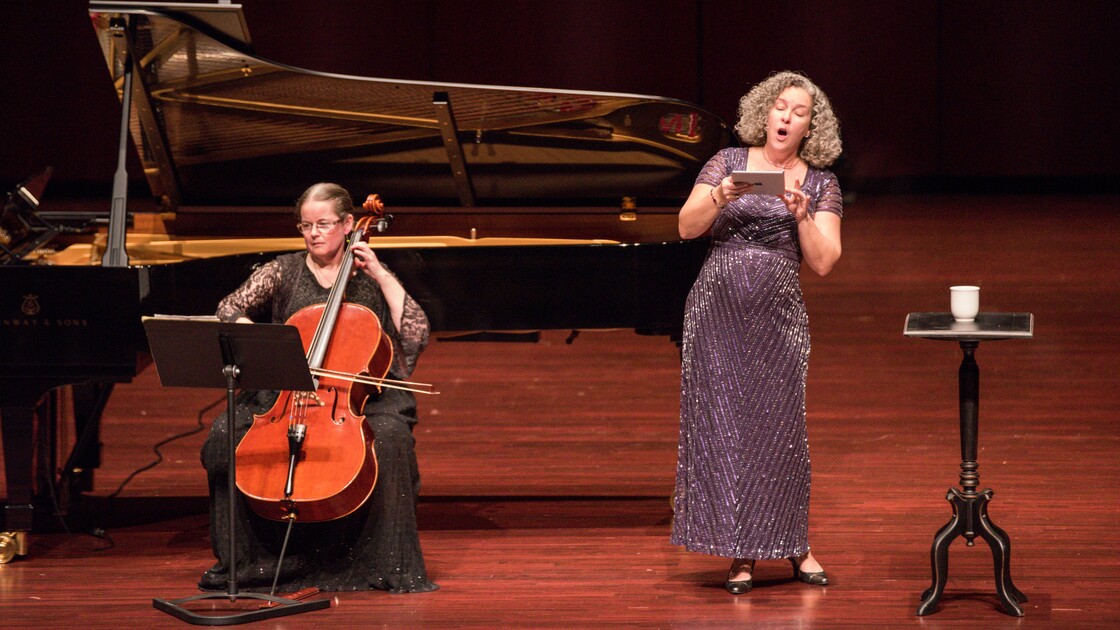 Schumacher, a professor for cello at the University of Central Oklahoma, has performed solo concerts at Wigmore Hall in London, Jubilee Hall in Singapore and Carnegie Recital Hall in New York and elsewhere.

Mrs. Malone is a voice instructor at Herbert W. Armstrong College. She has played many title roles, including Queen of the Night in Mozart’s The Magic Flute, Gretel in Humperdinck’s Hansel and Gretel and Christine in Yeston’s Phantom, as well as roles in musicals written by her husband, Ryan Malone, and produced by the foundation.

The two artists were assisted on piano by Mr. Malone, who is also the foundation concert manager.

The first half opened with an arrangement of Bach’s classic Prelude from Cello Suite in G—with a twist. Oklahoma-based composer Samuel Magrill added Hebrew text to a soaring soprano melody over the deep timber of the cello.

Continuing with the Bach theme, Malone sang three secular cantata arias, assisted by uco associate professor of flute Emily Butterfield. One of the arias, “Ei! Wie schmeckt der Kaffee süsse (Ah! How Sweet Coffee Tastes!)” produced laughs from the audience as Mrs. Malone paused her singing to take a sip from her mug.

The next set featured a collection of art songs (poetry set to music) for soprano, cello and piano in French, German, Italian and English. Art songs are common recital pieces, but in this set, the Italian and German art songs were transcribed to include cello. In Stefano Donuady’s “O del mio amato ben (Oh, Lost Enchantment of My Dearly Beloved),” the expressive melody, normally played by the piano, was given to Schumacher.

The third set featured two operatic favorites, including the “Flower Duet” from Lakmé and “Poor Wandering One” from Pirates of Penzance. The first song, usually sung by two women, was arranged to give the lower melody to the cello.

Schumacher and Mrs. Malone spiced up the second half with three songs from Latin composers. The final song in this set, “Aria (Cantilena)” from Heitor Villa-Lobos’s Bachianas Basilieras No. 5, was originally scored for soprano and eight celli, but Mrs. Malone sang the complex vocalise (melody without words) rhythms accompanied by Schumacher and Mr. Malone on the Steinway.

Schumacher and both Malones stayed on stage for an encore. They performed “The Way of a Man with a Maid” from Armstrong’s upcoming musical production The Widow’s Might. The show premieres on December 29 at Armstrong Auditorium.