Painting and Audacity
To be successful at your hobby, you must get out of your comfort zone.
By Brianna Weeks • Nov. 17, 2016 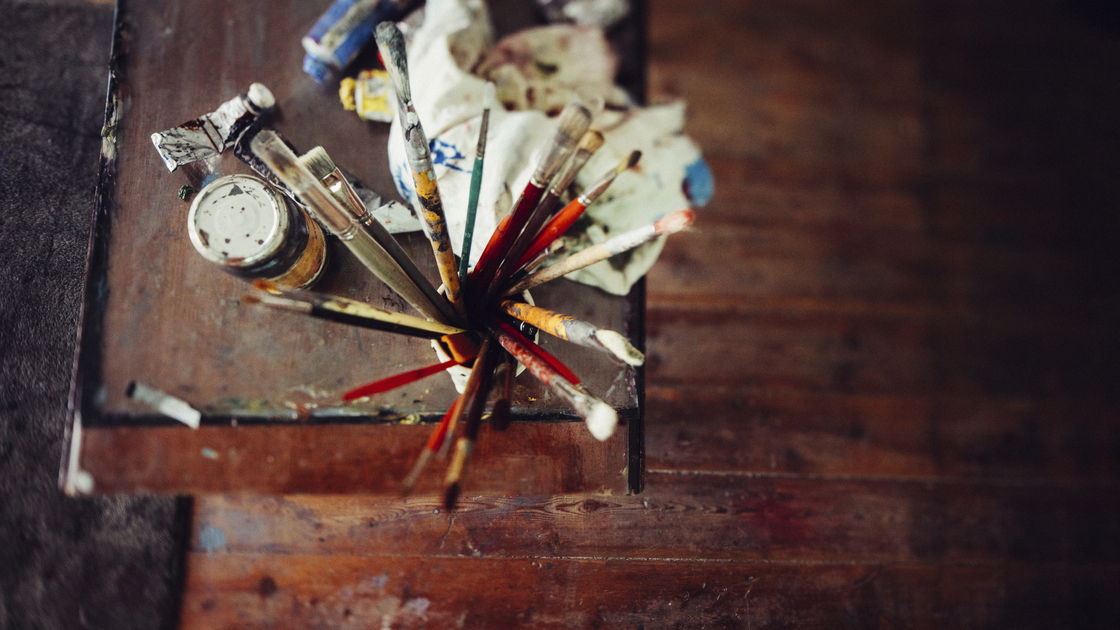 With careful calculation and not a small amount of apprehension, he reached his shaky hand out and picked up the smallest brush he could find, using only his fingertips to grab it in fear of accidentally unsettling the other brushes around it. With brush in hand, he pivoted slowly to his other side. This is where his palette sat, covered in a rainbow of perfectly spherical beads of color. He brought the tip of the brush down to the white, penetrating the surface of the paint. The edge of the paint pulled out and curled back around as he lifted the brush back into the air.

With the tip of his brush covered in a small dab of white paint, he moved it toward the blue paint. With painstaking precision, he brought the white down to touch a corner of the blue, and slowly swirled the two together. The blue and white streaks blended together into a lighter blue color—the perfect color to depict the sky that he was looking at.

The brilliantly white canvas before him seemed to stretch on and on as he looked up at it, poising with his paintbrush inches away from its smooth surface. It gleamed clean and crisp, and now he was going to tarnish it in the hope that his end product could somehow be more beautiful than blank perfection. Fear coursed through his body.

As carefully as he could, he brought the brush into contact with the canvas, dragging it ever so slightly and leaving a sky blue mark about the size of a bean. The mark was so small and insignificant that the white of the canvas seemed to swallow it up.

Just as Churchill made his first mark on the world of painting, a motorcar (we just call them plain old cars nowadays) pulled into his driveway. Out from that car stepped the wife of Sir John Lavery, a famous painter from Ireland who specialized in portraits. His wife, Hazel—who was also a painter—immediately came over to Churchill and exclaimed: “Painting! But what are you hesitating about? Let me have a brush, the big one.”

Before he could stop her, Mrs. Lavery grabbed the biggest brush and began slapping the blue and white paints together on the canvas, heedlessly ruining the perfect symmetry of the beads of paint. Next, she attacked the canvas with her brush, slashing through the brilliant white. No longer did the canvas fight back; no longer could it swallow up the color—it was completely helpless, forced into submission by Mrs. Lavery’s fierce streaks. She continued to throw bold colors onto it in a mad frenzy.

This revolutionized the way Churchill looked at painting. He realized that this canvas held no power over him. He did not have to cower in fear in front of it. He was the one in charge. As he said, “The canvas grinned in helplessness before me. The spell was broken. The sickly inhibitions rolled away. I seized the largest brush and fell upon my victim with berserk fury. I have never felt any awe of a canvas since.”

Painting soon became Churchill’s favorite pastime. He didn’t start painting until he was 40 years old, and yet he ended up painting over 500 works of art before he died! He never would have been so successful in this hobby had he continued to approach it with the same halting fear that almost overcame him the first time he picked up a brush. He was successful because another person taught him to be brave. He was successful because he realized that a key to being successful in any hobby is audacity.

To be successful in painting, Churchill had to get out of his comfort zone. He had to unhesitatingly jump into the unknown. He didn’t know quite how to approach painting at the start. He wasn’t comfortable with fearlessly attacking the canvas, making it submit to his direction. He could have given up. If Mrs. Lavery hadn’t driven up at that moment and inspired him with her boldness, he probably would have given up—it’s all too easy to stop just short of accomplishing something great if it requires stepping out of the familiar comfort zone.

Churchill described this first encounter with painting and how it taught him to approach his hobbies with audacity in his article “Painting as a Pastime.” He encouraged his readers to create hobbies of their own, for “it would be a sad pity to shuffle or scramble along through one’s playtime … shifting from one heel to the other, wondering what on Earth to do, as perhaps is the fate of some unhappy beings, when all the while, if you only knew, there is close at hand a wonderful new world of thought and craft, a sunlit garden gleaming with light and color of which you have the key in your waistcoat-pocket.”

That key—the ticket to “a joy ride in a paint-box,” as Mr. Churchill said—is audacity. You won’t be able to find a productive and edifying hobby unless you are willing to step out of your comfort zone and try new things. And if you don’t try new things, you’ll never know if you are missing out on a “wonderful new world of thought and craft”!

The summer is a perfect time to try new things—to be a little audacious in the goals you set. Read a thick biography that might seem a little daunting. Start a journal, and write in it a little bit each day. Take up crocheting or woodworking. Get outside. Get some fresh air. Get your hands dirty! It may not seem appealing to you right now, but you never know until you try—the door you’re swinging open might be the door to a wonderful new world! You might end up loving your hobby so much that you want to do it for the rest of your life! That is what happened to Winston Churchill.

That first painting definitely wasn’t Churchill’s best—he had a lot to learn and much room for improvement. But he didn’t let this discourage him. He had the audacity to keep going. You won’t be the best at swimming or sewing or softball the first time you try either. But if you have the courage to keep trying, you will improve. As Winston Churchill said, “Every day you may make progress. Every step may be fruitful …. [T]here will stretch before you an ever-lengthening, ever-ascending, ever-improving path. You know you will never get to the end of the journey. But this, so far from discouraging, only adds to the joy and glory of the climb.” Have the courage—the audacity—to make that climb.