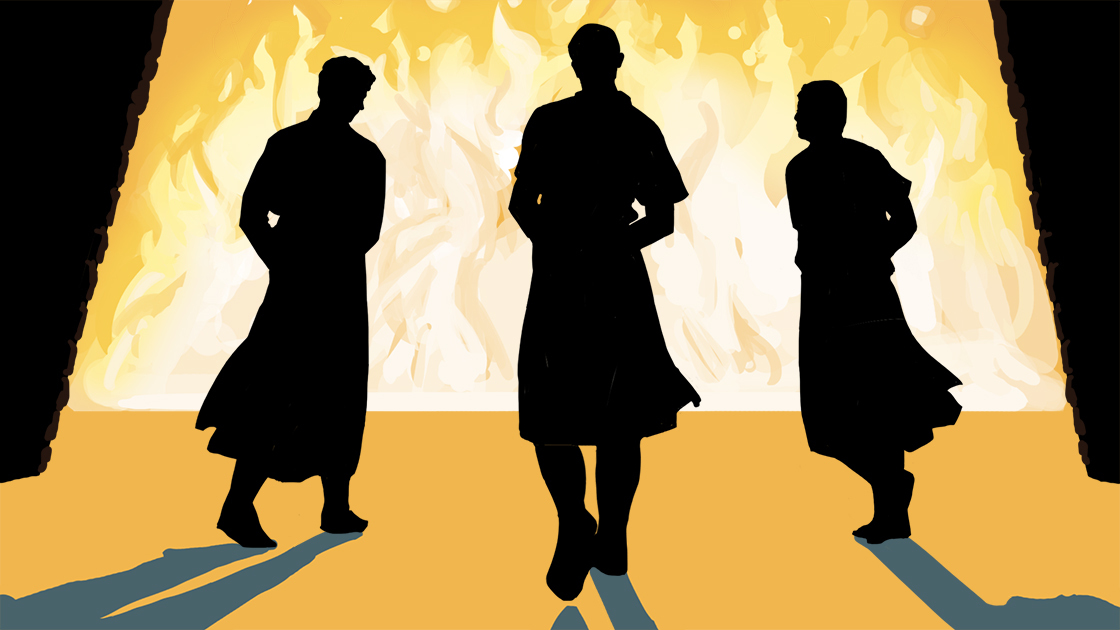 I want to become a billionaire! I’d like to see my name on Forbes Magazine’s billionaire list. The last time I checked, it had 1,826 people with a combined worth of $7.05 trillion. To get me started on this path to wealth, I’ve acquired a personal piggy bank and cut out the campus snack store from my shopping destinations.

Well—not really. Becoming a billionaire is not so easy. I think I can safely say that my chances are extremely slim.

It’s a totally different story however with regard to becoming a spiritual billionaire. 1 Peter1:6-7 explain what I mean: “Wherein ye greatly rejoice, though now for a season, if need be, ye are in heaviness through manifold temptations: That the trial of your faith, being much more precious than of gold that perisheth, though it be tried with fire, might be found unto praise and honour and glory at the appearing of Jesus Christ.”

Daniel’s three friends—Shadrach, Meshach and Abednego—were young people whose faith was tried in a literal fire. Their faith became more precious than gold.

These lads, likely in their early teens (Daniel 1:4), were Jewish nobles taken to Babylon during the first of three waves of the Babylonian siege of Judah.

They had a close relationship with God, and “God gave them knowledge and skill in all learning and wisdom” (verse 17). They became so wise and knowledgeable that they were 10 times smarter than Babylonian King Nebuchadnezzar’s magicians and astrologers (verse 20).

Nebuchadnezzar erected an impressive golden image 6 feet wide and 60 feet tall—about as tall as Armstrong Auditorium! He demanded that at a signal of music, all should bow down before that image and worship it. Non-compliance would be punished by death in a fiery furnace.

Daniel’s friends knew better than to disobey God and worship worthless gods. Ready to accept the consequences, they refused to obey King Nebuchadnezzar in this regard and chose rather to obey the King of kings.

When Nebuchadnezzar questioned the lads about their actions, “Shadrach, Meshach, and Abednego, answered and said to the king, O Nebuchadnezzar, we are not careful to answer thee in this matter” (Daniel 3:16). They had already made up their minds about obeying God at any cost. They knew that God could deliver them from any trial. They knew that God will always make it possible for His people to obey Him (verse 17).

Nebuchadnezzar was so infuriated, his face became distorted (verse 19). He had the furnace’s heat increased seven times and charged his strongest soldiers to bind the three friends and cast them into the furnace.

At this point, God performed a spectacular miracle. As Shadrach, Meshach and Abednego were taken to the furnace, they noticed that the blazing flames had no effect on them. When they were cast into the fire, those men who had thrown them in were burned to death.

That experience made a deep impression on these young men. Even King Nebuchadnezzar knew that a spectacular miracle had been performed by God. He had the three friends released and extolled their God saying, “Blessed be the God of Shadrach, Meshach, and Abednego, who hath sent his angel, and delivered his servants that trusted in him, and have changed the king’s word, and yielded their bodies, that they might not serve nor worship any god, except their own God. [T]here is no other God that can deliver after this sort” (verses 28-29).

What does your fiery furnace look like? We all face trials, some of which seem to far exceed what we are able to bear. True Christians should never forget God’s promise that with every trial He will provide a way of escape (1 Corinthians 10:13).

God references the example of Shadrach, Meshach and Abednego among a slew of other tests that would cause us to cower if we didn’t have the precious faith of Jesus Christ (Hebrews 11:32-38).

Are any of these trials too much to ask of us? Humanly speaking they are all too much to fight our way through. But does such pessimism or lack of faith sound like a valiant attempt to become a billionaire overnight?

In a June-July 1985 Good News article, Herbert W. Armstrong wrote: “If you had to choose between receiving gold valued at $50,000 or a great trouble to test your faith, which would you choose? The gold? You’d make a wrong choice if you did.”