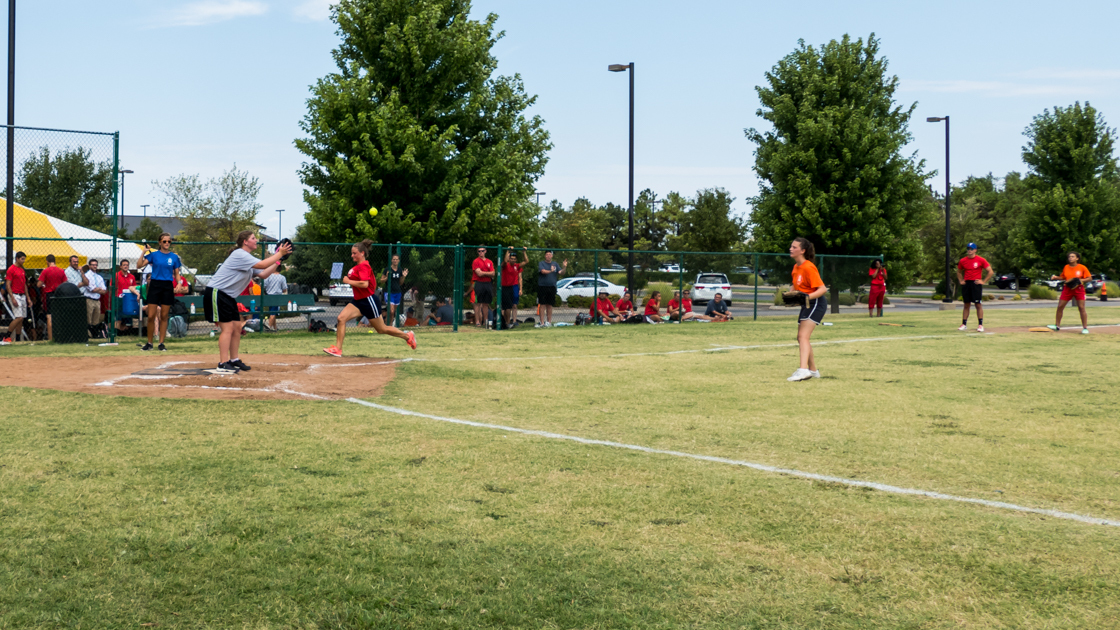 The morning of All-Stars Day 2 started off with a hearty breakfast provided by the kitchen staff—the last breakfast of PYC 2016. All-Stars then recommenced with cycling and archery individual events. The cycling All-Star consisted of three races: the long, short and sprint courses, all for time. Each course was worth a specific amount of points. The male and female campers who scored the most points won the overall event. Alex from 6B won for the boys, and Erica from 4G won for the girls.

At archery, Marquis from 1B and Christina from 3G shot with the most consistency and accuracy. They each won the overall archery All-Star.

After archery, all the campers and staff headed out to the softball field, where the girls prepared for their softball All-Star game. Camp director Wayne Turgeon’s wife, Laura Turgeon, coached one girls’ team, while assistant softball instructors Cheyenne Chaney and Amber Eagle coached the other.

That would be the last time Team Chaney/Eagle saw the lead, however. In the bottom of the third inning, Erin from 4G cracked the ball for Team Turgeon, and after a couple of bad fielding errors, Viktoria and Mrs. Turgeon scored off of Erin’s hit. Erin made it to third, and on the next play, she made it home. The score was now 4 to 2, Team Turgeon.

The rest of the game went in much the same way, with a highlight of the game being Mr. Turgeon’s cheer for his wife as she stepped up to bat: “Hit it for your honey!”

The game ended at the top of the seventh inning, when Team Chaney/Eagle got three outs. The final score was 14 to 2, Team Turgeon.

After the girls’ game, the boys’ headed onto the field to begin warming up. Mr. Turgeon and Mr. Burns were the coaches for the two boy All-Star teams.

By the top of the sixth inning, Team Turgeon was winning with a devastating lead of 16-2. But, as announcer Ryan Malone reminded the crowd, leads can end quickly in softball. Team Burns made the most of their time at bat, getting four runs before second baseman Logan easily caught a fly ball, ending the inning.

Team Turgeon only added one run to their lead during their next at bat. Team Burns did the same, now only 10 runs behind instead of 14.

Although Team Burns had an impressive defense, they just couldn’t make up the deficit. In the end, Team Turgeon hung on to be victorious, with a score of 18 to 7.

All of the campers then migrated to the swimming pool for the next All-Star: girls’ water polo.

After both teams were lined up on either side of the pool, referee Dan Burns threw the yellow ball into the water and blew his whistle. Both sides sprinted for the ball, with white gaining the early possession. Adrienne from 2G scored the first and only goals of the quarter, giving white the lead early in the game. At the half, however, Team Cocomise had come back to tie the score at 2 to 2.

While the girl players recovered during halftime, a boys’ swimming All-Star took place. For the first time in several years, four boys participated in swimming races that helped determine the swimming champion of PYC 2016. The contest was simple: Two sets of two campers raced each other in the semi-finals, and then the campers that won from each of the semi-finals raced against each other in the final. In the first semi-final, Dimitri from 5B won against Alex from 6B. In the second semi-final, Taylor from 1B won against Jordan from 3B. In the final, it was a close race between Dimitri and Taylor, but Taylor pulled ahead slightly to win it, claiming the title of swimming champion.

After the races, the second half of the girl’s water polo game began. Adrienne from 2G scored another time for white, and purple responded with a goal of their own. The score was tied, 3-3. In between the third and fourth quarters, the campers and water polo players sung along to Journey’s “Don’t Stop Believing,” undoubtedly giving both teams hope that they would prevail.

The fourth quarter started with a quick goal in the deep end for purple. In the end, Team Cocomise was victorious, with a score of 4 to 3.

After the girls grabbed their backpacks out of the locker rooms and hustled off to change in the Field House, the boys dropped off their belongings and changed into their swim trunks. The campers and workers prepared themselves for the final two All-Stars of PYC 2016: boys’ water polo and girls’ swimming.

For water polo, 4B counselor Nick Irwin coached the white team while 1B assistant counselor Kieren Underwood coached the purple team. White dominated the first half of the game, scoring a succession of goals.

The four girls racing in the swimming All-Stars met and prepared to swim during the half. In the first race, Adrienne from 2G won over Olivia from 5G, and in the second race, Zoe from 3G won over Stephanie from 6G. Adrienne and Zoe went against each other in the final, with Adrienne out-swimming Zoe by a hair’s length to claim the title of swimming champion.

In the second half of the boys’ water polo game, purple fought back hard, but they were unable to prevail. In the end, white was victorious, winning with only one more point than purple, 9 to 8.

That was the end of the PYC 2016 All-Stars season. The campers headed back up to the Field House to enjoy a quick dinner before departing to prepare for the last activity of PYC 2016: the Awards Ceremony.