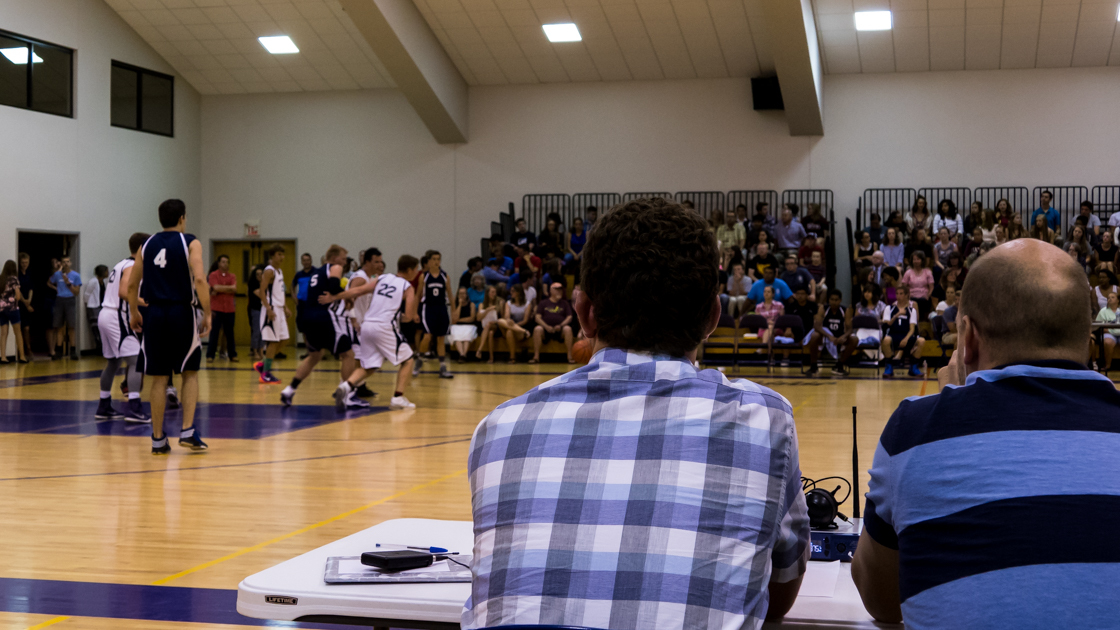 All-Stars began on Saturday night with the traditional boys’ basketball game. I arrived at the gym in the John Amos Field House about half-an-hour early on Saturday night, just as the boy camper All-Stars were arriving as well.

Campers Malik from 1B and Daniel from 6B squared off for the tip-off. White won the tip-off, with Malik jumping up and grabbing the ball to pass it back to teammate Isaiah. With that, PYC 2016 All-Stars had begun!

During halftime, I asked basketball and volleyball assistant instructor Kassandra Verbout what she thought of the game. “It’s really nice to see them work together and communicate and give high-fives,” said Miss Verbout.

Halfway through the third quarter, Jordan tied the score up for blue, 22 to 22. The last four minutes were a frenzy of shooting and scoring, however, and by the end of the third quarter, white was up once again, with a score of 32 to 24.

In the fourth quarter, after a couple of three-pointers by Taylor, blue came back once again to tie the game at 36 to 36. One of the teams called a time-out with fifty seconds left in the quarter. “It’s been a high-energy, tough contest, coming down to the wire with fifty seconds left. It’s anybody’s game,” said assistant camp director Eric Burns.

With ten seconds left in the game, blue grabbed the ball and hustled down the court. It looked like they would be the ones to win the game. But, in a crazy turn of events, they missed their shot and white took the rebound!

5, 4, 3, 2…white raced down to the other side of the court. Sam had the ball, and he went up for the lay-up. The ball just escaped from his finger-tips as the buzzer sounded. And…the ball went in! The crowd went wild as the white team crowded around Sam. Mr. Brown lifted him up into the air in a celebratory hug. Sam’s mother yelled and laughed in happiness from the sidelines. The final score for the boys’ basketball All-Stars game: 38 to 36, white—decided by a buzzer-beater.

The next All-Star took place the next morning: girls’ soccer.

After a hearty breakfast, the All-Star girls headed up to the soccer field to warm up and talk strategy with their teams. Once they finished warming up, the girls split into their teams and put on either red or yellow jerseys. This caused a lot of laughter as the red team compared themselves to strawberries and the yellow team compared themselves to lemons. After each team cheered for the other, the two teams ran onto the field, and the game began.

Yellow had possession of the ball first, but red quickly stole it. They continually kept the ball on yellow’s side of the field, and they had multiple shots on goal. Each time, however, the ball was stopped by goalie Tyrsa, whose nickname—“the Wall”—deservingly carried over from the All-Star game last year. Although red kept possession of the ball for quite a while, they failed to penetrate The Wall.

During interims in the action, 4B’s assistant counselor and acting commentator for the game, Albert Clarke, enlightened the audience about the sponsors for that morning’s All-Star game: “This game is sponsored by sunscreen. If you forget it, you’ll regret it.”

“This game is brought to you by the laundry crew. They put the sock in soccer.”

“This game is brought to you by the kitchen staff—because in order to score goals, you first need cereal bowls.”

His comments brought endless delight to the camper and worker spectators.

The first half of the game ended with a tied scored of 0 to 0.

The second half proceeded in much the same way. Neither team could get the ball past the other team’s goalie. The game ended in a 0 to 0 tie, which meant that the PYC 2016 girls’ soccer All-Star game would go into a shoot-out.

The shoot-out ended when Viktoria from 2G scored the game-winning goal for yellow. They won 2 to 1.

The next activity for PYC 2016 All-Stars was boys’ soccer. The boys would wear blue and yellow jerseys for the game.

It took until the second quarter for either team to score—once again, the goalies were tough to beat. Isaiah from 2B did eventually score for yellow, however, which made the score 1 to 0 in yellow’s favor.

Toward the end of the first half, Jeremiah from 3B made a goal during a penalty kick, tying the score for blue at 1 to 1.

During the third quarter, Jeremiah made another goal. 2 to 1, blue. A few minutes later, he facilitated another blue goal by making a crisp pass to Mr. Powell, who neatly shot the ball into the goal. 3 to 1, blue.

During the short break between the third and fourth quarters, Mr. Clarke gave us all a weather update over the speaker system. With the heat index, the temperate was 106 degrees! No wonder the boys were sweating so much.

The fourth quarter began with a goal made by yellow’s Isaiah, bringing the score to 3 to 2. Although yellow played hard, they were unable to score again. The game ended with blue triumphant over yellow, 3 to 2.

That ended the morning’s All-Star games, and everyone headed down to the Field House for lunch. After lunch, we all headed into the gym, where both girls’ volleyball and girls’ basketball All-Stars would take place that afternoon.

Volleyball was first. In a normal volleyball match, there are five games scheduled. The first team to win three games wins the entire match. In this All-Stars game, Mr. Sloan’s team ended up winning the first three games, meaning that the match was finished after those first three games—it was a quick and decisive victory.

The game began with a tip-off between Christina and Destiny. By the end of the first quarter, the game was tied, 2 to 2—kind of a sad score after six full minutes of basketball. The second quarter went better, with the score jumping up to 13 to 6 in white’s favor.

By the end of the third quarter, white had advanced their lead to 19 to 8. In the fourth quarter, blue shot much more accurately, desperate to stay alive in the game. Abby from 6G scored two baskets in a row, earning quite a few much-deserved cheers from the crowd. But blue’s come-back wasn’t enough to topple white’s lead. White ended up winning the game, 27 to 17.

With the end of the girls’ basketball game, it was time for everyone to head back out into the sun for the boys’ flag football game.

Orange struck first, with quarterback Logan from 3B sending a perfect pass to Dyan from 1B, who grabbed it out of the air and held onto it for dear life. Jordan from 3B was sent in to kick the extra point—but it bounced off the crossbar. Without the extra point, orange was up 6-0.

During blue’s drive, quarterback Micah’s pass was intercepted by Sam from 3B. Orange could not capitalize on the interception, however, and they turned the ball back over to blue. Then, just before halftime, quarterback Micah threw the ball into the end zone, where teammate Brandon from 6B was waiting for a clean catch. Touchdown, blue! Blue was also able to kick the extra point, giving them the lead as they went into halftime, 7 to 6.

The second half began with blue kicking off to orange. Orange capitalized on their drive with a throw from quarterback Logan to teammate Sam, who basically walked into the end zone. After the touchdown, they tried for a two-point conversion, but were unable to complete it. The score remained 12-7, orange.

On the next play, once blue had regained possession of the ball, quarterback Micah threw the ball to teammate Isaiah—who ran it 65-yards before his flag was pulled. Zechariah H. from 6B caught the ball in the end zone on the next play, resulting into a blue touchdown. They kicked the extra point, making it 14 to 12, with blue in the lead.

In the fourth quarter, orange scored again, getting both the touchdown and the extra point. Blue responded with a touchdown of their own, and the score quickly jumped to 21 to 19. That was the score the game ended at, with blue winning over orange.

After the flag football game, it was time for dinner, followed by one last All-Star event for the day: a canoeing relay. The girls went first, followed by the boys. Two campers from each dorm participated. 3G’s Zoe and Kelley won for the girls, and 5B’s Dimitri and Melchiah won for the boys.

Once canoeing ended, the first day of All-Stars was complete. After a long day in the sun, campers were excited to get home and get to sleep. A full schedule of All-Stars was already planned for the next day, so they would need all the sleep they could get.