The Bee’s Knees
There is a lot to be learned from this incredible creation.
By Brianna Weeks • June 21, 2016 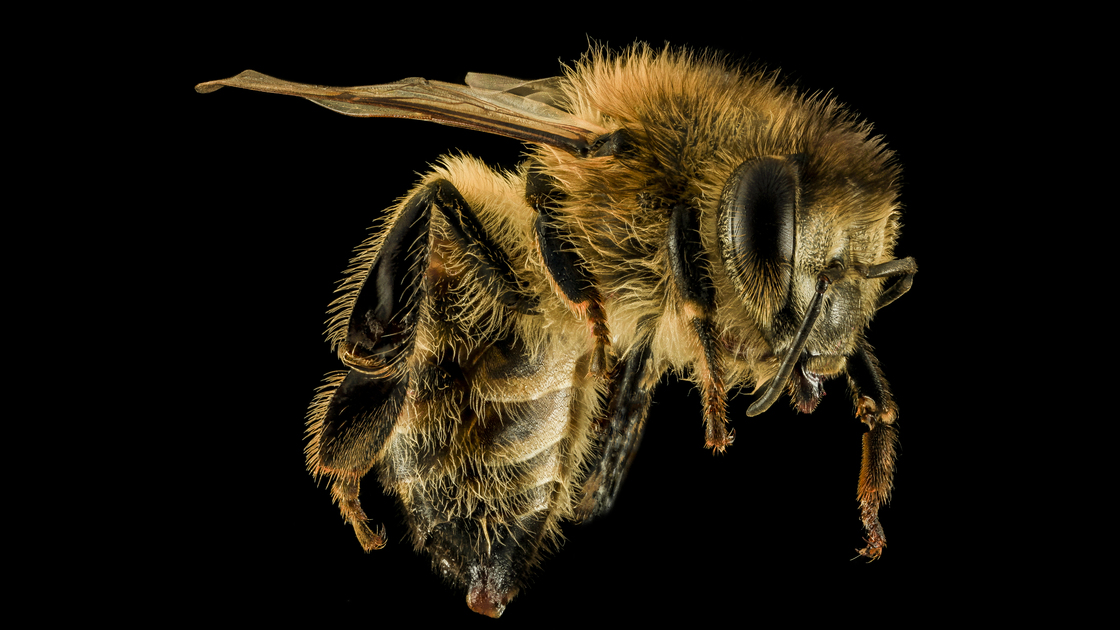 There is a noise that strikes fear into the hearts of almost anyone who hears it. That fear can manifest itself in different ways within the people it affects. For some, it causes them to cringe and freeze. For others, it causes them to yelp and frantically swat at the air. The most common reaction seems to be screaming and running around like a wild animal.

What could possibly be big enough to cause such a dramatic response? Well, for something that can create such a big commotion, it is actually a remarkably little perpetrator. But the noise it makes is unmistakable:

Yes—the bee. The nemesis of every child who romped around outside during the summer—and ran crying back to the house because a bee stung her finger. Bees are most often associated with pain, and that is why most people are scared of them.

If you take an unbiased look at how a bee works, however, you’ll find that bees are actually a lot more interesting—and less scary—than you think! Bees are an amazing part of creation, and studying them can give us a greater appreciation for God’s handiwork.

Bees have six legs, and those legs are attached to the thorax, or middle part of the bee. The front two legs (forelegs) of a bee have antennae cleaners on them, the middle two help with the bee’s overall stability as it walks, and the back two legs (hind legs) are responsible for gathering pollen.

It turns out that bees (specifically honeybees) will visit over 100 flowers per day to gather both pollen and nectar. If a bee had to return to the hive to drop the pollen and nectar off each time it visited a flower, it would be quite inefficient. The bee wouldn’t be able to visit nearly as many flowers during the course of a day. A bee needs a way to store that pollen.

That is what pollen baskets are for. In scientific terms, the pollen basket is known as the “corbicula.” Each female honeybee (only female bees gather pollen!) has two pollen baskets—one on each hind leg. These are located on the tibia of the hind leg, which, if you were to compare a bee’s and a human’s legs, would be on our shin bone. Imagine having a bulging pile of pollen sticking out from your shin!

A pollen basket is pretty much what it sounds like—a basket for storing pollen. It is flat and somewhat concave when it is empty, and it is surrounded by little hairs. A bee’s legs are covered with these little hairs, and those hairs act like Velcro as the bee walks across a flower. The pollen sticks right to them!

Once the pollen is stuck to its legs, the bee will groom itself to collect it. Besides the normal Velcro-like hairs, a honeybee’s hind legs also have little comb-like that it uses to groom the pollen into the pollen basket. As it does this, it mixes its pollen with a little bit of the nectar that it is also gathering, making the pollen stick together and stay inside the basket.

How many grains of pollen do you think fit inside a single pollen basket? A hundred? A thousand? Ten thousand? Not even close! A single pollen basket can hold around one million grains of pollen. Pollen is tiny! In fact, a single grain of pollen can be anywhere between 1/3 and 1/7 the size of the width of a human hair. If someone 10 feet away from you holds up a piece of hair, you probably won’t see it (unless this person has remarkably dark hair). A single strand of hair is small. And yet, a single strand of hair is about three to seven times wider than a single grain of pollen!

So when bees go buzzing past us and we start screaming and running away, they are most likely not out to target and sting us. They are trying to find pollen! But why do they gather pollen? It’s not to make honey, as you might have thought. Honey is made from nectar, and bees collect nectar in an entirely different way. Bees collect pollen because it is a plant protein, and they need protein to feed the bee larvae. Pollen is a baby bee’s food! Without it, bees would go extinct.

This is the process—and purpose—that bees go through to gather pollen. There’s a lot more to a bee than you might think! And God carefully planned out each little part of it—from the Velcro hairs to the pollen baskets. So the next time you hear a bee buzzing toward you, swallow your gut reaction to freak out and run away. Stop and wait. Let the little guy land on a flower nearby. If you get close enough to it, you might be able to see its pollen basket or the way it grooms itself. Instead of looking out for and avoiding bees, look out for opportunities to get closer to and observe God’s masterful handiwork. If you do, you’ll realize that His creation is the bee’s knees.