Peace Begins With You
The lion, the lamb, the little child—and you
By Mark Jenkins • June 16, 2016 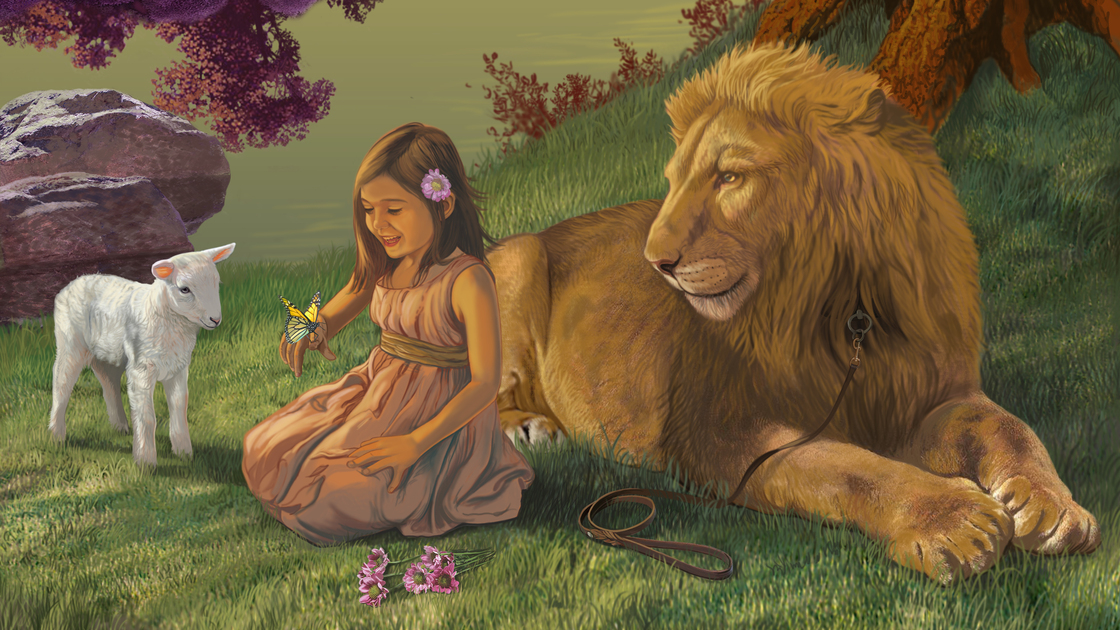 When I was a child, I went to public school like many of you, but we didn’t have a playground with slides and swings and jungle gyms. When I went outside for recess, we went to a large, black, asphalt parking lot. And every day, one of the main activities the little children engaged in was fighting. The teachers watched, seemingly as amused as they would have been at a professional wrestling event.

We were, in other words, a perfect representation of today’s world. That world isn’t something you want in your life.

The symbol that was associated with the Worldwide Church of God and the Work at that time was the logo of a lion, a lamb and a little child. That is an image of peace—a vision of the future when the whole world will live at peace.

Teens, that peace begins with you. How you live today shows a picture of the World Tomorrow. And by living God’s way now, you are preparing to teach this way of peace in the future.

Could someone look at your home and get a glimpse of the lion, the lamb and the little child today? Do you see how well that image applies to our relationship with our families, with our friends—with everyone we come into contact with? Would those you live with describe you as someone who makes peace?

1 Thessalonians 5:22 tells us to “[a]bstain from all appearance of evil.” In other words, we shouldn’t even pretend that we are hurting each other. We don’t kick and punch and push and roll on the ground. We should avoid doing things that even look evil. This is one reason we don’t allow our children to pretend to play with guns. This is why in my family, paintball, laser tag and other games where one person pretended to shoot another were not allowed. I still participated in the riflery program at school, firing at targets, and I’ve taught archery at pyc—but those things did not portray the act of harming another human being.

Mr. Armstrong told a story in his Autobiography about a young man who “… was demonstrating to me the superiority of his German-made revolver over a Colt or other American make.

“In play, he pointed the revolver straight at me.

“He pointed the revolver a couple of feet to one side of me, and pulled the trigger.

“It was a very superior weapon, all right. It drilled a hole completely through the wall of his room, and let a little round ray of sunlight shine through from outdoors!

“My German friend turned white, and trembled in confusion.

‘Why,’ he stammered in frightened embarrassment, ‘I was sure it wasn’t loaded.’

“It is the gun ‘that isn’t loaded’ that has killed many people. And before I leave this little digression, may I respectfully suggest to all who read this that you teach—yes, really teach your children never, under any circumstances, to point even a play gun at any person. The life you save may be your own!”

In that case, the appearance of evil turned dangerous—as it often does.

Peace requires everyone to be involved. Just one person can take the peace out of a situation. That is why everyone has the responsibility to be a peacemaker. It’s a commitment that you individually have to make.

Galatians 5:26 says, “Let us not be desirous of vain glory, provoking one another, envying one another.” This is a responsibility for every member of the family. An argumentative spirit should never come up in our families because we should never let conflict get that far.

This gets down to a spirit of cooperation—with those over you, with those around you, with those close to you. Proverbs 13:10 tells us, “Only by pride cometh contention: but with the well advised is wisdom.”

To have this spirit of cooperation, we have to apply the principle in Proverbs 15:1: “A soft answer turneth away wrath: but grievous words stir up anger.” Most of the time when peace is broken, it is broken by anger—and perpetuated by our own foolish responses.

Do you know what reward a peacemaker receives? Matthew 5:9 tells us that the peacemakers “shall be called the children of God.” What a great reward for living the way of peace now.

Mr. Armstrong wrote about this way of peace in Mystery of the Ages: “Think of it! No more wars. No fear of man or beast. World peace at last. Something will have to cause that peace. The law of God, which a professed ‘Christianity’ teaches was done away, shall go out from Jerusalem, and the Earth will be as full of the knowledge of God’s way of life as the ocean beds are full of water.

“Even the wild animals will be tamed and at peace: ‘The wolf also shall dwell with the lamb, and the leopard shall lie down with the kid; and the calf and the young lion and the fatling together; and a little child shall lead them. And the cow and the bear shall feed; their young ones shall lie down together: and the lion shall eat straw like the ox. And the sucking child shall play on the hole of the asp, and the weaned child shall put his hand on the cockatrice’ den. They shall not hurt nor destroy in all my holy mountain: for the earth shall be full of the knowledge of the Lord, as the waters cover the sea’ (Isaiah 11:6-9).”

And there’s the image. We might often think of it on a smaller scale—a single lion, lamb and child—but this is a vision of the entire Earth! That beautiful image will be the result of God’s knowledge filling the Earth and being applied by everyone. The totality of the change in our world will be beyond description. Mr. Armstrong continued:

“Look now at the solved problems!

“See, now, a glimpse into a world of no illiteracy, no poverty, no famine and starvation, into a world where crime decreases rapidly, people learn honesty, chastity, human kindness and happiness—a world of peace, prosperity, abundant well-being.”

And who will be solving those problems, making those changes—introducing that peace to the entire Earth? You will be.

When you read: “Instead of thy fathers shall be thy children, whom thou mayest make princes in all the earth” (Psalm 45:16), does it really sink in?

Princes in all the Earth. That’s you.

You represent tomorrow’s world—a world of peace. You will be a prince during that coming World Tomorrow. Even though that world isn’t here yet today, your example of living the way of peace shows people what that future world will be like. We establish a microcosm of the coming Kingdom in our homes and let our light shine for those in our schools and communities. This is why Mr. Armstrong named the college “Ambassador College”—because we are ambassadors for God’s world even today. Mr. Gerald Flurry has said that even the animals should recognize this campus as a place of peace.

Read Isaiah 11:6-9 again, and realize that the attitude behind this time of peace is one that you will usher in. Read Isaiah 2:2-4, which describe the coming age when nations will stop learning how to conduct war, put down their swords and spears, and beat them into plowshares and pruning hooks. Read these scriptures and apply that spirit of peace to yourself, both now and in the future.

Let there be peace on Earth, and let it begin with you.