Fruit Fit for Harvesting
How can we be sure that when Christ returns, we will have produced fruit worthy of harvesting to feed the world?
By Eric Burns • May 2006 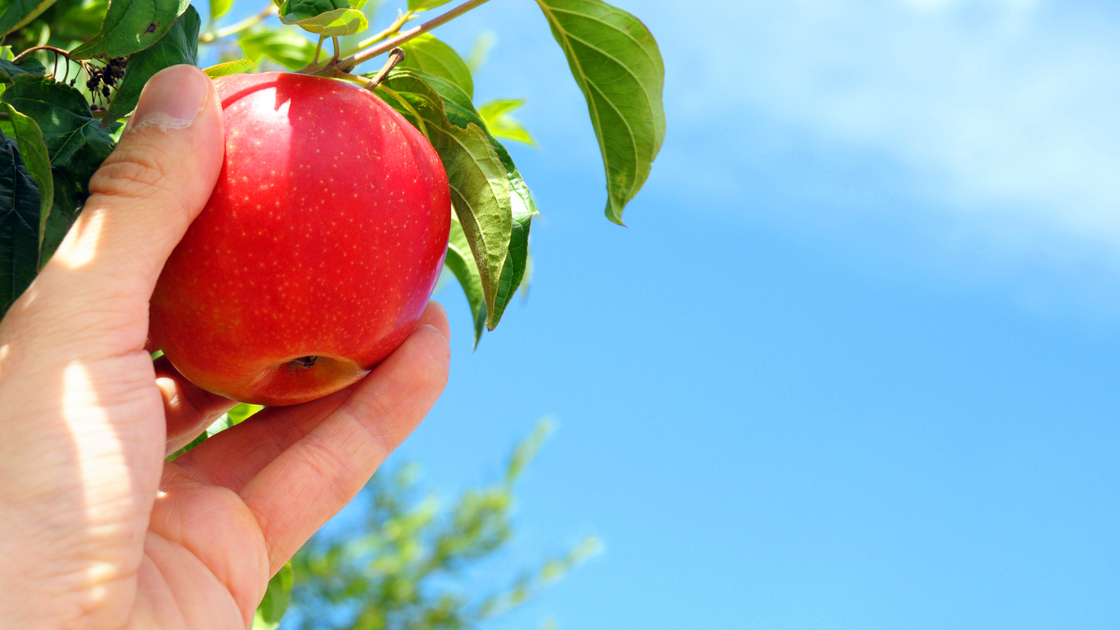 In Matthew 13:24-30 Christ describes, in the parable of the wheat and the tares, how there will be those in God’s Church at the end time who will not be bearing fruit. He reveals that although He sowed only good seed into the Church, another sowed tares, “while men slept” (verses 24-25). Individuals have come into God’s Church today, not by God’s doing, but by Satan’s manipulations. Appearing to be genuine wheat, they have been permitted to remain for a purpose (verses 28-29). At the time of the harvest, those tares which remain among the wheat, or God’s people, will be removed by Christ. Barnes’ Notes suggest that “By ‘tares’ is probably meant a degenerate kind of wheat, or the darnel-grass growing in Palestine. In its growth and form it has a strong resemblance to genuine wheat; but it either produces no grain, or that of a very inferior and hurtful kind. … It was extremely difficult to separate it from the genuine wheat, on account of its similarity while growing.”

These tares can be of an “inferior and hurtful kind”—planted intentionally among the wheat to restrict or destroy the true wheat; or they can be a “degenerate” kind—not intentionally destructive, but nonetheless not producing the proper fruit.

In this season of Pentecost, the harvest of God’s firstfruits, this parable should make all of us stop and question ourselves, “What kind of fruit am I producing?” In Luke 6:43-44 Christ says, “For a good tree bringeth not forth corrupt fruit; neither doth a corrupt tree bring forth good fruit. For every tree is known by his own fruit.” The fruit we produce—the end result of our daily actions—bears witness of the kind of life we are actually living. Satan would like nothing better than to turn each one of us into tares producing inferior, hurtful or degenerate fruit. He has been actively working to do just that since he was cast down to Earth (Revelation 12:10, 12). How can we be sure that when Christ returns, we will have produced fruit worthy of harvesting to feed the world?

A few years ago, I met a man who had served in a top-secret division of the armed services in the Korean War. He was assigned, along with a team of other scientific researchers, the task of developing a destructive, but selective, microbe that when applied to a growing grain crop would invisibly affect the interior portion of the kernel, known as the germ. The plan was that, once the microbe was dispersed, the crop plants would continue to grow through their various stages. Though giving the promise of grain to the human eye, the crop would be far from normal. During the flowering stage, when the plant began heading and the grain was being formed, the microbe would attack the germ inside the grain kernels—destroying the fruit of the plant. When the time would come to harvest the grain, the farmer would find he had a crop totally unfit for harvesting.

The objective of this research program was to hamper the armies of the newly formed People’s Republic of China in their support and aid of the North Korean Army in its military advance into South Korea. It was felt that if the grain production could be destroyed, at the time of harvest—when it was too late to plant additional crops—the Communist armies of China would have insufficient food to sustain them in a prolonged attack on South Korea.

While the objective was never achieved, it does offer some striking similarities to how our adversary, Satan, can operate on God’s people. Let’s look at three lessons we can learn from this example to help prevent “unfruitful production” in our lives.

First, we must recognize that God expects us to be actively producing fruit at all times. A fruit-bearing plant is useless if it doesn’t produce fruit. The parable of the sower in Luke 8:5-15 demonstrates, among other things, that our Christian lives are not defined by a moment in time when we hear God’s Word and are “saved,” but by a lifelong process of “having heard the word, keeping it, and bringing forth fruit with patience” (verse 15).

Galatians 5:22-23 describe the fruits we should be producing: “But the fruit of the Spirit is love, joy, peace, longsuffering, gentleness, goodness, faith, meekness, temperance ….” The life-experiences—the trials and tests that occur in each of our lives—are there to help us develop these godly character traits. “And not only this, but we glory in afflictions also, knowing that afflictions work out patience, and patience works out experience, and experience works out hope. And hope does not make us ashamed, because the love of God has been poured out in our hearts through the Holy Spirit given to us” (Romans 5:3-5; Modern King James Version). Regardless of our position, status, or lot in life, God’s Spirit actively working in our lives will produce this wonderful fruit.

Second, we must recognize that Satan knows that if he can deceive us and keep our minds on the physical issues of this life, he can greatly reduce or completely destroy the production of the fruit of God’s Spirit in our lives. Peter warns us: “Be sober, be vigilant; because your adversary the devil, as a roaring lion, walketh about, seeking whom he may devour” (1 Peter 5:8). Satan wants to destroy us completely, and he attempts to do so by constantly attacking us with accusations, by creating doubt, by working on our vanity and our self-centered human nature. If he is successful in doing this, he’s only a small step away from taking us right out of the Church. God says of Satan, “there is no truth in him. When he speaketh a lie, he speaketh of his own: for he is a liar, and the father of it” (John 8:44). If Satan can cause us to doubt our calling—the Work that we as firstfruits are called to do—then he can not only destroy the fruit we are producing individually, but also cause tremendous damage to the Work of God. Just look at the fruits of the Laodicean churches after Herbert W. Armstrong’s death as Satan has exploited the vanity of the leadership of those churches.

Paul warned the Church at Corinth, “But I fear, lest by any means, as the serpent beguiled Eve through his subtilty, so your minds should be corrupted from the simplicity that is in Christ” (2 Corinthians 11:3). Referring to this scripture, Mr. Armstrong wrote: “Eve did not have a mind that was evil before Satan came along and confronted her. But Satan, by subtlety, deceived Eve. Eve’s children were not born with this evil nature. Nor were the people of the Corinthian church. But Paul feared, lest Satan, still around after some 4,000 years, pervert Corinthian minds directly, as he had done to Eve. The selfishness, hostility, deceitfulness, wickedness, rebellion, etc. that we call ‘human nature’ is actually Satan’s nature. It is Satan’s attitude. And broadcasting it, surcharging the air with it, Satan actually now works in the unsuspecting all over the world today! That is how Satan deceives the whole world today” (Good News, June 1976). Fortunately, God doesn’t leave us helpless, but provides us with all the “armor” we need to fight this destructive force (Ephesians 6:10-18).

The third point is that while Satan works tirelessly to deceive us, we must be careful that we don’t deceive ourselves when it comes to growing and producing the fruit worthy of harvesting. Jeremiah 17:9 says, “The heart is deceitful above all things, and desperately wicked: who can know it?” Just as the grain plants in our example above would have looked healthy and appeared to be producing fruit prior to harvest time, we also can appear to be producing the proper fruits of the Spirit but living empty Christian lives. If we rely on our own efforts—our own righteousness, our own thoughts—we will be deceived. Hebrews 4:12 tells us where we should put our trust: “For the word of God is quick, and powerful, and sharper than any two edged sword, piercing even to the dividing asunder of soul and spirit, and of the joints and marrow, and is a discerner of the thoughts and intents of the heart.”

God’s Word directs us in how we should recognize and attack self-deception, and only God’s Spirit can lead us in understanding His Word. It isn’t our knowledge of God’s Word that makes us Christians, it is what we do with that knowledge (Psalm 111:10). God’s people are to be active in their religion. James admonishes: “But be ye doers of the word, and not hearers only, deceiving your own selves” (James 1:22; see also Romans 2:13).

God’s firstfruits are not just called to salvation, but to do a work preparing for the final fall harvest of all humanity. In his booklet Human Nature: What Is It?, Stephen Flurry points out the reason for our calling: “That brings us back to the ultimate purpose of why man was created in the first place—to become God. God is reproducing Himself. He is calling out a select few at this point to assist Him in teaching others in the World Tomorrow. In preparing for that, they must overcome just as Jesus Christ did (1 Peter 2:21; Revelation 2:26; 3:21). We can’t overcome by our own power. It has to be Jesus Christ living again in us by the power of God’s Spirit (Galatians 2:20; Zechariah 4:6). God is creating something very beautiful in us. ‘[W]e are his workmanship, created in Christ Jesus unto good works,’ as Paul said (Ephesians 2:10).

“‘For this is the love of God, that we keep his commandments: and his commandments are not grievous’ (1 John 5:3). Real love—God’s love—is action. It is keeping God’s commandments. And unless our peoples stop talking about love and start obeying God’s law, the evils and moral depravity we see all around us will only get worse. Only when we make a stand, with firm resolve, and determine to live according to God’s way, will we ever eradicate the evil nature—actually Satan’s nature—which resides in the mind of man. Only then, when every human being rejects Satan’s way and seeks God’s Spirit-power, will we be able to solve the problems that plague mankind” (emphasis added).

The feast of Pentecost is all about that joyous time when God finally harvests His firstfruits and begins to usher in the coming Kingdom of God. We too can be there, right alongside Jesus Christ, if, during this lifetime, we are bearing fruit fit for harvesting.