Lessons From History: Lead by Example
What you can learn from a 23-minute flight
By Brianna Weeks • June 2, 2016 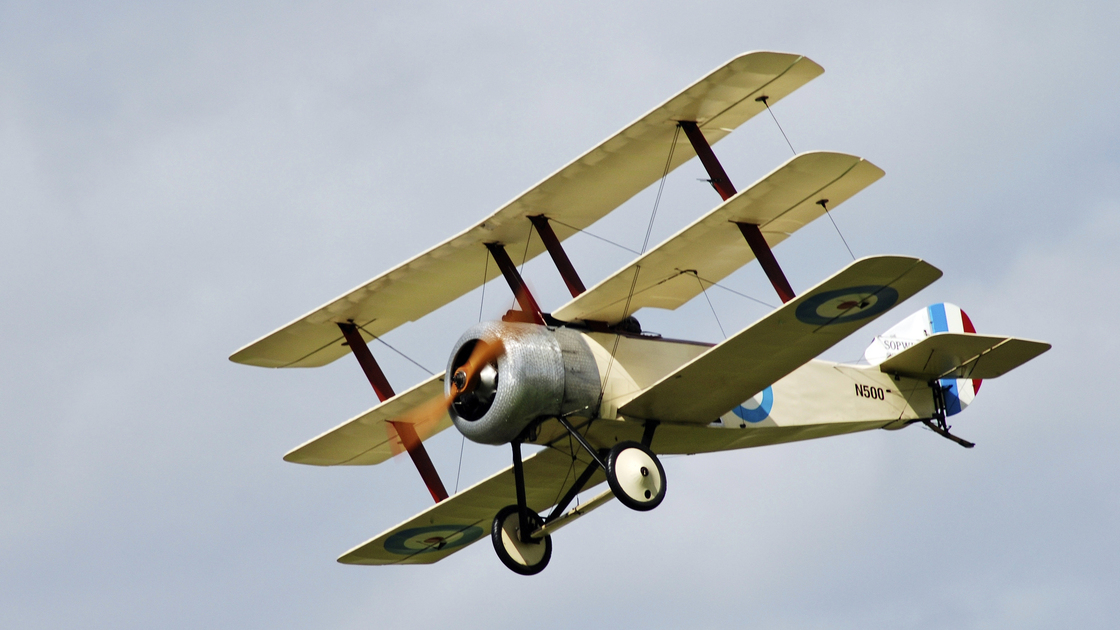 istockphoto.com/newsfocus1
Sopwith replica of a prototype which first flew in 1916 for the Royal Naval Air Service.

The airplane is a relatively new invention. It wasn’t until 1903 that Orville and Wilbur Wright successfully flew the first airplane—and that “flight” lasted only 12 seconds.

However short that may seem, transportation was revolutionized from that day forward. The world never looked back.

The first commercial flight was on Jan. 1, 1914, when an airplane carrying one passenger traveled from St. Petersburg, Florida to Tampa, Florida. The flight lasted for 23 minutes, and the plane flew at an altitude of an astonishing 15 feet.

Three years before the first commercial flight, Great Britain was already busy establishing a Royal Naval Air Service—the predecessor to the Royal Air Force (raf). In 1911, Great Britain’s Royal Navy possessed six airplanes—or “aeroplanes” if you are Britishly inclined. The man who created the Royal Naval Air Service was a man whom everyone has heard of. He watched as the infinitesimal beginnings of a seemingly impossible invention transformed into the largest and most important branch of the entire armed forces—a branch that was, in large part, responsible for keeping Great Britain alive in World War ii. He directed its first stages of activity. He even came up with words such as “seaplanes” and “flight” to describe this new invention.

His name was Winston Churchill.

Churchill was First Lord of the Royal Naval Air Service from 1911-1915. From July 1917 until the end of World War i (late 1918), he was in charge of the organizations that designed, produced and distributed airplanes. After the war, he served as air minister and secretary of state for war until 1921.

Even in the early years of airplanes before World War i, Churchill understood the importance of this new invention. He realized that such an invention could revolutionize warfare, and if Britain wasn’t at the front of the revolution, another country would be. To protect Britain and its empire from such a threat, he resolved to create an air force that could rival and ultimately defeat any other air force.

In these beginning stages, “flight”—to use the term that Churchill coined—was dangerous. Not many people wanted to risk their lives flying large metal machines—especially during times of peace when an air force seemed unnecessary.

Churchill found a few men, however, who were brave enough to put their lives in danger for the future success of their country. They were, according to Churchill, “adventurous young men”—the “pioneers of naval flying.” These men were put on the front lines of airplane development. They were the ones who experimented with the planes, taking off and flying into a sky full of endless dangers. But that is how they made progress—by putting their lives on the line.

Instead of sitting safely in his office and reading reports about what these men were doing, Churchill actually flew with them! He put himself in danger because he saw that they were putting themselves in danger, and he, as he put it, “felt a very keen sympathy” for them. He recognized that every time these men took to the air, they were putting their lives at risk. So he put his life at risk too.

Churchill took this opportunity to lead by example. He knew that Britain needed to capitalize on this new invention. But he also knew that few men would be willing to risk it all. He needed a way to attract attention to flying. And what better way than by flying himself? He was the First Lord of the British Royal Naval Air Service, after all, and if he didn’t fear taking to the sky, neither should any respectable British man.

This doesn’t mean that Churchill was fearless. He was actually quite terrified about his first flight. As he said, “I have no compunction in relating the apprehensions which surrounded my first taste of the glorious sensations of flying. I am sure that when the secrets of all hearts are revealed, they will be found to have been shared by a good many others.”

Churchill was nervous—and rightly so. This was a new invention, after all, and he had already been witness to numerous accidents. But he didn’t let his fear paralyze him. He acted in spite of his fear. And by doing so, he demonstrated to the whole of Britain that all respectable young men should do the same. He led his country by example. He didn’t call on the men of England to do anything that he wouldn’t do himself.

Churchill discovered a new love in flying. After that initial, terrifying flight, he flew over and over “for sheer joy and pleasure.” Churchill enjoyed flying so much that he decided to take flying lessons. He eventually learned how to pilot a plane himself! But he never would have known how much he loved to fly if he hadn’t, out of a sense of duty, stepped up and faced his fear during the airplane’s small beginnings.

Churchill’s Royal Naval Air Service blossomed into the raf in 1918, and during World War ii, the raf had 157 squadrons dedicated to defeating the Axis powers.

What started with six planes, a group of adventurous men and the example of one leader grew into an air force that, at the end of the World War ii, was larger than any other in the world.

It pays to lead by example.

Find ways to lead by example in your own life. Have the courage to befriend the shy kids at school. Have an obedient mind-set, and do your chores without complaining at home. Have a ready mind, and take comprehensive notes at services. If you do, your classmates, siblings and friends will have a positive example to look up to. You can change their lives, just as Churchill changed the future for Britain.

Airplanes, commercial flights and exhaust trails are as common as clouds nowadays, but people who lead by example are not. You can determine to change that.