What Do You Mean ‘Baptized With Fire’?
Much confusion exists about the baptism with fire. Here is the plain, biblical truth.
By Wik Heerma • May 2013 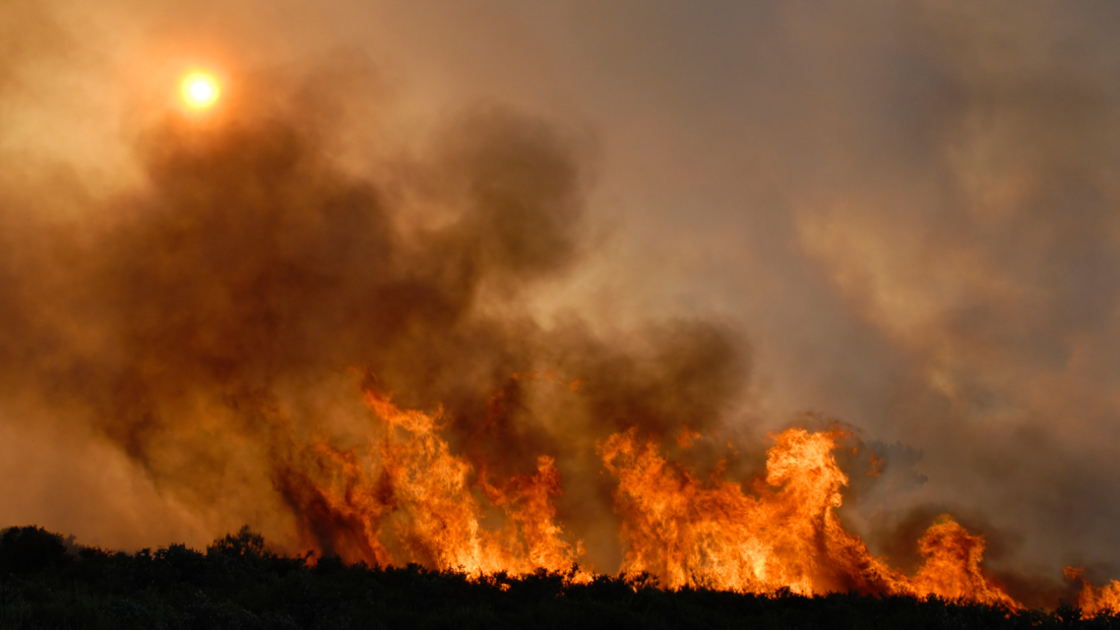 John the Baptist declared: “I indeed baptize you with water; but one mightier than I cometh, the latchet of whose shoes I am not worthy to unloose: he shall baptize you with the Holy [Spirit] and with fire” (Luke 3:16). Most professing Christians have heard of water baptism and the receipt of the Holy Spirit. Although interpretations vary as to what this means, there is a general consensus among those who proclaim to follow Christ that it is something that is desired, even needed. But what about the mysterious baptism with fire? When does it take place? And is it something a Christian should seek?

Those who say one should seek baptism with fire erroneously associate it with the “cloven tongues like as of fire” that appeared on the disciples on the first day of Pentecost (Acts 2:3). The expression “like as” in this verse means just that: as if it were. It doesn’t say fire descended on these disciples.

Similar to the outward appearing of a dove descending on Jesus Christ after His baptism and the voice that said, “This is my beloved Son, in whom I am well pleased,” this visual sign, resembling flames of fire, accompanied the first outpouring and receipt of the Holy Spirit on Christ’s disciples, who were now commissioned to do a work throughout the entire Earth.

These disciples did not waste any time in using this special gift. “And they were all filled with the Holy [Spirit], and began to speak with other tongues, as the Spirit gave them utterance. And there were dwelling at Jerusalem Jews, devout men, out of every nation under heaven. Now … the multitude … were confounded, because that every man heard them speak in his own language. And they were all amazed and marvelled, saying one to another, Behold, are not all these which speak Galilæans? And how hear we every man in our own tongue, wherein we were born? Parthians, and Medes, and Elamites, and the dwellers in Mesopotamia, and in Judæa, and Cappadocia, in Pontus, and Asia, Phrygia, and Pamphylia, in Egypt, and in the parts of Libya about Cyrene, and strangers of Rome, Jews and proselytes, Cretes and Arabians, we do hear them speak in our tongues the wonderful works of God” (verses 4-11). God started His Church as an international work. His message was clearly understandable to these people who had traveled from far and wide to be in Jerusalem on the day of Pentecost.

Who Did John Address?

But let’s go back to the account of John the Baptist. Matthew 3:5 tells us that all Jerusalem and all Judæa came to hear and see John the Baptist. Did they all come in a repentant attitude, seeking salvation? Certainly not!

Droves of people came to see John preach and baptize in the wilderness. For many, it was out of curiosity over what everyone was talking about. Many looked on baptism as a ritualistic washing. So John’s preaching was not only to those who genuinely sought repentance, but also to the unrepentant, hypocritical religious crowd. Notice what John said of this latter group: “But when he saw many of the Pharisees and Sadducees come to his baptism, he said unto them, O generation of vipers, who hath warned you to flee from the wrath to come? Bring forth therefore fruits meet for repentance: And think not to say within yourselves, We have Abraham to our father: for I say unto you, that God is able of these stones to raise up children unto Abraham. And now also the axe is laid unto the root of the trees: therefore every tree which bringeth not forth good fruit is hewn down, and cast into the fire” (Matthew 3:7-10).

It is important to note that John said that He who would come after him—Jesus Christ—would be the one who would baptize with the Spirit and with fire.

John did not baptize all who came to hear and see him—not even in a water baptism. He first demanded, as does God, fruits of repentance. Many of the Pharisees and Sadducees who heard John preach were hypocritical and unrepentant; they did not produce good fruits. John said they would be baptized with fire, or immersed in gehenna fire, unless they would repent. John commented that they were awaiting “the wrath to come.”

It is obvious that the account of Acts 2 was not a description of this wrath to come. Instead, that gehenna fire, or the wrath to come, refers to the lake of fire, which the Bible states is the second death (Revelation 20:14).

What is the penalty for those who refuse to quit sinning? Mark 9:43 gives us the answer. Christ was not speaking of literally severing limbs, but rather to stop using them to commit sin! The word translated hell here is from the Greek gehenna, not the more commonly used hades, which means the grave.Since Jesus Christ states that these unrepentant sinners “go into [gehenna], into the fire,” it can be inferred that those who go to gehenna receive punishment by fire. Mark reinforces this in verses 45 and 47. Gehenna clearly refers to fire.

Notice what the Herbert W. Armstrong College Bible Correspondence Course states in lesson 6 concerning gehenna: “This Greek word is derived from the name of the narrow, rocky Valley of Hinnom, which lies just outside Jerusalem. It was the place where refuse was burned up. Trash, filth and the dead bodies of animals and despised criminals were thrown into the fires of gehenna, or the Valley of Hinnom. Ordinarily, everything thrown into this valley was destroyed by fire—completely burned up. Therefore, Christ used gehenna to picture the fate of unrepentant sinners!”

In Malachi 4:1-3 and Revelation 21:8 we see this ultimate fate of all the incorrigibly wicked described as a devouring lake of fire.

Notice Matthew 3:11-12: “I indeed baptize you with water unto repentance: but he that cometh after me is mightier than I, whose shoes I am not worthy to bear: he shall baptize you with the Holy [Spirit], and with fire: Whose fan is in his hand, and he will throughly purge his floor, and gather his wheat into the garner; but he will burn up the chaff with unquenchable fire.” Jesus Christ is depicted here as having a fan in His hand. Fans were used to separate the wheat from the chaff. Once the grain was harvested, a fan was used to separate the wheat kernels from the chaff. And the fate of the chaff is to be burned with unquenchable fire.

In the parable of the tares, Christ stated: “Let both grow together until the harvest: and in the time of harvest I will say to the reapers, Gather ye together first the tares, and bind them in bundles to burn them: but gather the wheat into my barn” (Matthew 13:30). The wheat obviously represents the saints, and the tares (or chaff) are the unrepentant sinners. Christ privately educated His disciples on this meaning. “He answered and said unto them, He that soweth the good seed is the Son of man; The field is the world; the good seed are the children of the kingdom; but the tares are the children of the wicked one; The enemy that sowed them is the devil; the harvest is the end of the world; and the reapers are the angels. As therefore the tares are gathered and burned in the fire; so shall it be in the end of this world” (verses 37-40). This was a prophecy for the end of this world.

Letting the Bible interpret the Bible, the floor of Matthew 3 is the same as the field of chapter 13—it represents the world. Notice how similar the wording is used by both John and Christ. At the end of this world, when God has set His hand to save all mankind, those who still refuse to amend their ways will be gathered and immersed—baptized—with fire, which consumes them. Their lives were chaff—a fruitless existence. God will purge out any rebels.

God certainly does not delight in this immersion by fire. “The Lord is not slack concerning his promise, as some men count slackness; but is longsuffering to us-ward, not willing that any should perish, but that all should come to repentance” (2 Peter 3:9). But for those who refuse to repent, Peter goes on to describe, “But the day of the Lord will come as a thief in the night; in the which the heavens shall pass away with a great noise, and the elements shall melt with fervent heat, the earth also and the works that are therein shall be burned up” (verse 10).

During the prophesied lake of fire, “the elements shall melt with fervent heat,” and incorrigible sinners and their works shall be burned up and be as though they never were. This planet will be immersed by fire, and its physical surface will be burned up. This is a baptism we all should fear, not seek. Instead, “Seeing then that all these things shall be dissolved, what manner of persons ought ye to be in all holy conversation and godliness, Looking for and hasting unto the coming of the day of God, wherein the heavens being on fire shall be dissolved, and the elements shall melt with fervent heat? Nevertheless we, according to his promise, look for new heavens and a new earth, wherein dwelleth righteousness. Wherefore, beloved, seeing that ye look for such things, be diligent that ye may be found of him in peace, without spot, and blameless” (verses 11-14).

Only by a full immersion in water as an outward symbol of an inward attitude that wants to live in newness of life, and a fruitful life fueled through baptism with God’s Holy Spirit, could we ever be found of Him in peace, without spot and blameless—and avoid the baptism by fire!