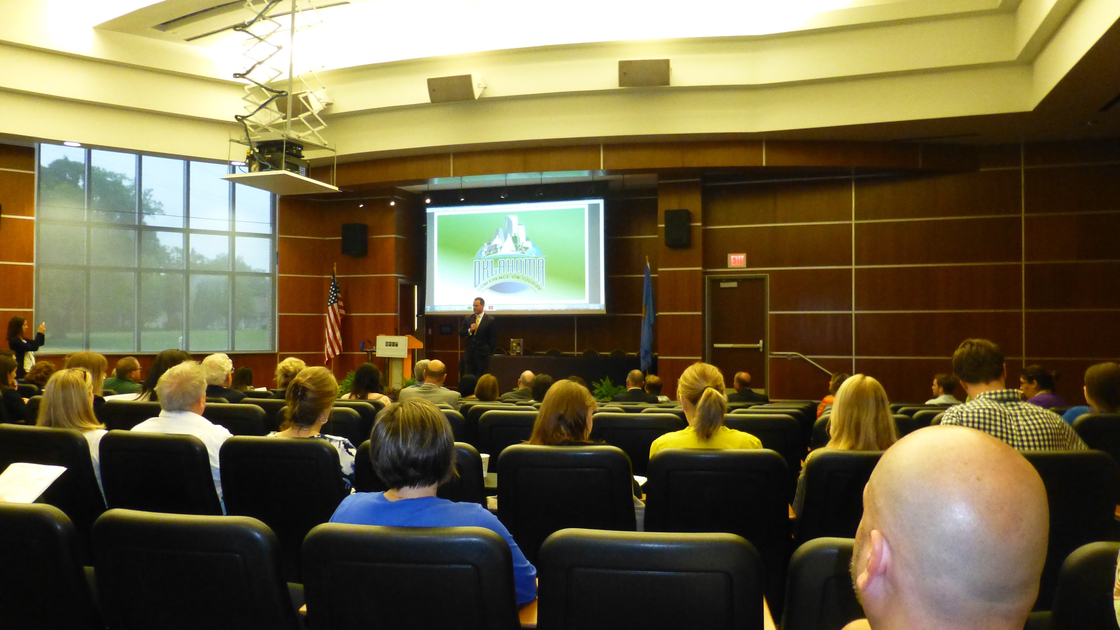 EDMOND—Armstrong International Cultural Foundation staff members Shane Granger and Edwin Trebels represented Armstrong Auditorium at the 2016 Oklahoma Conference on Tourism on May 17 at Oklahoma City University. They said they took the opportunity to reconnect with other professionals and to make new contacts.

Other conference attendees included representatives from destinations, convention and visitors bureaus, event organizers, advertising agencies, motor clubs, state departments and educational institutions. Lt. Gov. Todd Lamb welcomed attendees and spoke about the importance of tourism, which is the third-largest industry in Oklahoma. Trebels said that he and Granger have met Lamb on several occasions, and that it was the lieutenant governor who presented Armstrong Auditorium with a Red Bud Award in 2014.

Granger and Trebels also heard lectures on being transparent with visitors, by customer service consultant Phil Bruno; on attracting young Generation Y urban travelers, by technology author and speaker Crystal Washington; on using social media for live events, by social media trainer Sheila Scarborough; and on promoting your activities, presented by representatives of the Oklahoma Tourism and Recreation Department.

Trebels said that although most of the information presented was review, he noticed the effective manner with which Washington and Scarborough presented their talks. He and Granger said they plan to use aspects of those approaches when they train other foundation staff members on social media. Both said they found networking to be the most valuable part of the experience.

“What was nice is that this year a lot of people knew about us,” Trebels said, “which was different from last year. A lot of that is from what the auditorium has been doing in terms of promotion; but I also connected with a lot of those people on social media last year; so this year we recognized each other and were able to build on the foundation we laid last year.”

“Staying abreast of the latest innovations and trends in tourism is important to our ability to attract new patrons to the concert series,” Granger said. “I came away with at least a dozen new ideas for how we can connect with our target audiences in a unique way. It was time well-spent.”