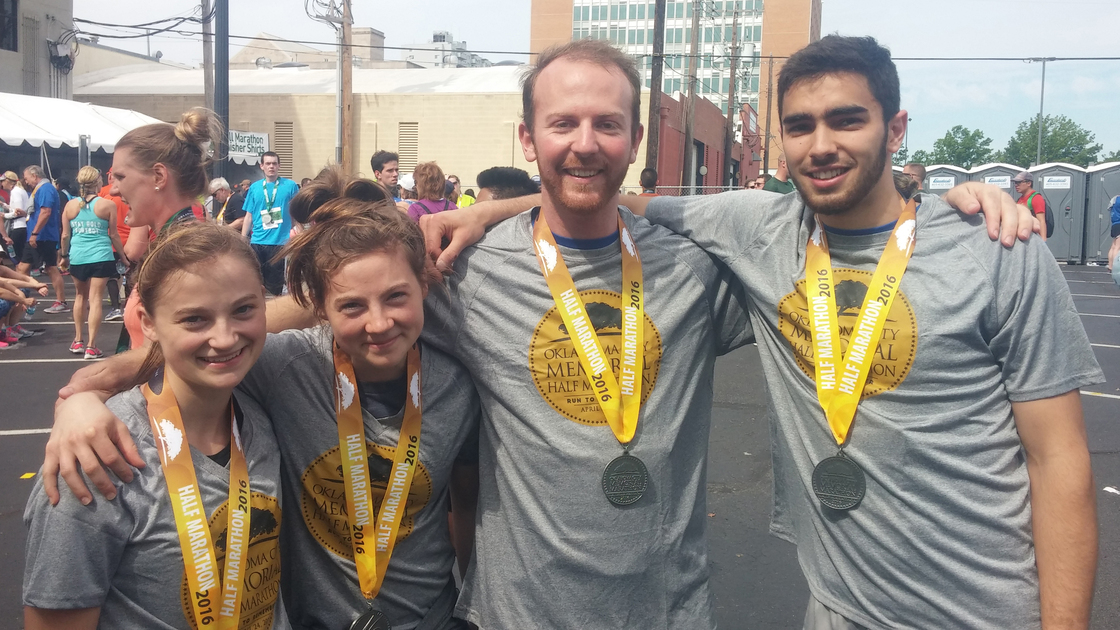 EDMOND—Thousands of people were packed into a downtown Oklahoma City intersection, yet you could have heard a penny drop. This was the moment of silence that began the 2016 Oklahoma City Memorial Marathon on April 24, and 22 Herbert W. Armstrong College students were there.

The “Run to Remember” marathon memorializes the day in 1995 that a terrorist bombed the Alfred P. Murrah Federal Building. Each year, the runners and organizers observe 168 seconds of silence, one second for each of the men, women and children who were slain.

This year, the event drew 24,818 people from 47 states and 13 countries for the marathon, half-marathon, relay or 5k, to recall the tragic event and to accomplish a personal challenge.

For months ahead of time, students could be seen running the roads on campus to train for the event. At 6:30 a.m., the race began—for those in the front of the pack. For many students, more than five minutes elapsed before they could cross the starting line, as the mass of thousands of runners began to take the course.

The marathon’s sense of commemorating loss and celebrating life and community was evident in the spectators and volunteers at food and drink stations and along the downtown route, who shouted out encouragement to the runners.

Students said they saw marathon participants from various circumstances, including parents pushing children in strollers, participants in wheelchairs or crutches, and a blind man with a guide who ran the full 26.2-mile route.

After two hours of running, the first Armstrong participants began to cross the finish line. A couple of hours after that, the first full-marathon participants finished.

“I learned a spiritual parallel deeper this year,” Grellet said regarding “hitting the wall” at mile 9, after which drinking became painful. “Often we have to do something that hurts in order to achieve the results we want,” she said. “Those few hundred yards of pain after a single mouthful of water means you can run another couple of miles. The pain subsides, and you can continue. Once you accept that the pain is coming but also remember that it ends, you can take that mouthful of water almost cheerfully because you know it means you’re going to finish.”

Clarke, who injured himself prior to last year’s race, returned this year and completed the full marathon with the fastest time among Armstrong students: 03:54:08. The second-fastest student was Erica Irwin, who finished with a time of 04:20:58.

Irwin said that running with her parents and brother was a special experience. “We encouraged each other along the way, especially during the more difficult stretches,” she said. “When we crossed the finish line, my brother pulled me in for a hug. Definitely a memorable moment.”

“It is amazing when you do something that is extremely difficult or even seemingly impossible,” Smithies said, “but you do it, and the excitement of achieving it is almost indescribable.”