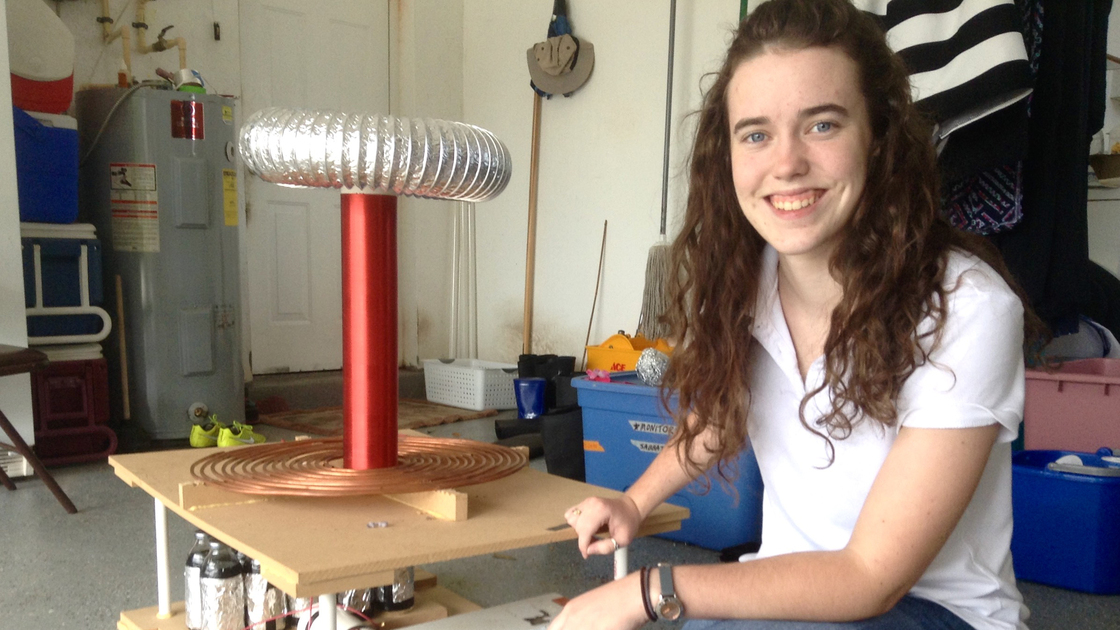 EDMOND—Dozens of high schoolers and their families gathered in the Barbara Flurry Memorial Hall on February 18 for the first Imperial Academy science fair. For local students and those viewing the event online, the science fair represented five months of planning, creating, experimenting, and video recording and editing their projects.

Because Westerbaan did his best to build suspense leading up to the science fair, the students had no idea whose videos would be shown. Arizonan freshman Hannah Worrell performed an experiment proving that candles of the same brand burn at the same rate, regardless of color. Fellow Arizonans Erin and Ian Lexa built smoke bombs with the help of their parents. Parents were closely involved in all the projects.

Sophomore Olivia Alvord, another Arizonan, tested the phenomenon of phantom limb pain on a multitude of friends and neighbors by placing a mirror across from the subject’s left hand and having him or her move it while keeping the right hand still and out of sight. Seventy-six percent of respondents claimed they could feel a tingling sensation in their right hand simply by watching the left hand move in the mirror.

“[The science projects] helped pull the online students in more,” Westerbaan said. “It’s tough sitting at a computer all day. You learn by doing.”

At Edstone, England, sophomore Vienna Flurry measured the amount of Vitamin C in various fruits. Freshman Micah Turgeon produced a video about vacuums and suction, but the video was remembered most of all for its intentionally out-of-tune recorder background music. Classmate Zoe Hilliker created a plastic pig, then launched it into the sky to prove that wings increase the distance flown.

“The night she fired up her Tesla coil, she had all of us—me, and her three sisters—recording her from every angle,” Fleda Evenson, mother of Sharon and Julia, wrote in an e-mail. “When the Tesla coil fired up, it was very exciting for all of us—it worked! I wanted to get in for a close-up, but every time I stepped too close, Julia had to remind me that the energy the coil was producing could fry my device. The videos we took didn’t do justice to what we were seeing. It was amazing.”

Sophomore Zechariah Henderson demonstrated the negligible impact of an electromagnetic field on microorganisms. Senior Alexa Turgeon enlisted the pun expertise of Herbert W. Armstrong College freshman Amber Eagle for her video showing how each added pulley decreases the amount of force while increasing the distance covered, concluding her video with a few jokes from Eagle, including: “Somebody better call the ‘pull-ice!’”

“What stood out most to me was the creativity and humor in the videos,” said Andrew McLain, whose daughter, Ashlynn, compared the effects of different foods on a handful of beta fish. “Each did a superb job presenting their own hypothesis and recording footage to show whether or not their experimental expectations would in fact succeed or fail. There was not a boring moment. Each video was well-balanced with fun entertainment and education. We had popcorn, too.”

Washington junior Gavin Fraser determined that a soccer ball bounces higher than a basketball or volleyball. His video was one of several featuring Rocky theme music, since Westerbaan said he would give extra credit for that special touch.

“The students were able to take on a lot more interesting projects because the parents were involved,” Westerbaan said.

“My main takeaway was that the students here at IA are really capable and really talented,” Westerbaan said. “It’s hard to challenge them. We keep holding the hoop higher and higher, and they just keep jumping through it.”