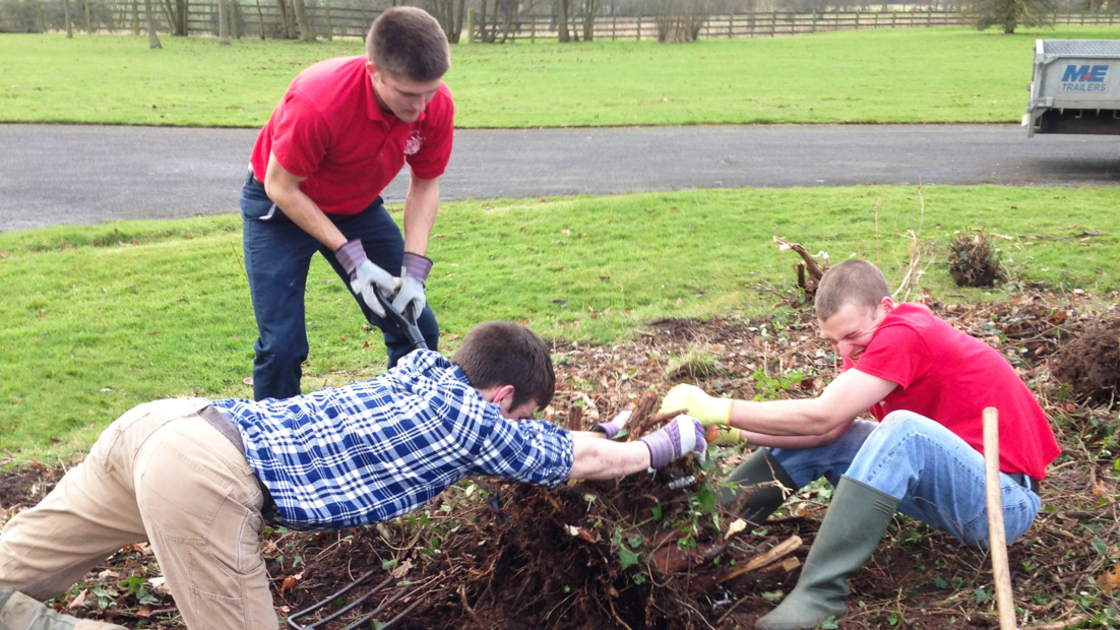 As the facilities were prepared for the opening of the college at Edstone, I had the opportunity to spend two weeks there. It was wonderful. The Work of God in Ephraim is concentrated on that campus, and living there for two weeks felt like living inside the Work. With God, there is always beauty and light, and on that Edstone campus, I felt immersed in it. That firsthand experience left me asking myself an important question: How much is my heart—the core of my being—really in the Work of God?

Living God’s way and doing God’s Work takes a lot of sacrifice. It takes being educated and learning to apply that education. It’s hard work! But it produces joy. To truly do the Work of God to the best of our ability, we must live in the work—just like I did during my stay at Edstone.

If we are going to really live in the Work, it cannot just be a side project to us—something we only think about when we have some spare time. It must fill our thoughts and dictate our actions. We must be wholly committed. Let’s look at an example of a man who was wholly committed to God: Joshua.

Joshua 14:7-8 says, “Forty years old was I when Moses the servant of the Lord sent me from Kadeshbarnea to espy out the land; and I brought him word again as it was in mine heart. Nevertheless my brethren that went up with me made the heart of the people melt: but I wholly followed the Lord my God.” This is Joshua speaking, and he is saying that he is wholly committed to following God. We can understand the context for this dogmatic statement by looking more at the story behind verse 7.

When the Israelites first reached the Promised Land, God commanded them to send 12 men—one man from each tribe—to spy out the land and return with a report (Numbers 13:1-2). The men scouted out the land for 40 days (verse 25). Upon their return, 10 of the 12 men gave “an evil report of the land which they had searched” (verse 32). The only men who encouraged the Israelites to go forward and take what God had prepared for them were Joshua, of the tribe of Ephraim, and Caleb, of the tribe of Judah (Numbers 14:6-9).

The wicked report of the other 10 spies discouraged the people so much that they actually wanted to stone Joshua and Caleb for reporting the good things about the Promised Land (verse 10). For their failure to trust in God and His plan for them, God punished the Israelites by making them wander in the wilderness for 40 years—a year for each day that the spies had been in the Promised Land and had overlooked the good things God was prepared to give them. Only two men above the age of 20 were allowed to enter the Promised Land: those who gave a good report. Only Joshua and Caleb would be part of the next phase of Israel’s development (Numbers 14:29-38).

Now we can see what Joshua meant when he said that he wholly followed God. He stood up against the claims of the majority and spoke for God instead! He would not back down—even to the point where the people wanted to stone him.

Mr. Stephen Flurry expounded on Joshua’s wholehearted commitment to the work in a March 2014 Trumpet article titled “Follow God With Your Whole Heart.” He wrote: “Here is one characteristic that helped shape Joshua’s courageous nature: He served God with his whole heart. God’s way of life is to go forward, sincerely, wholeheartedly and earnestly, as far as you can go in the direction of His law. The Christian life is a life of growing and improving character—of overcoming—of becoming more and more like Christ. If we are not growing, we are dying.”

Like Joshua, we must be entirely committed to serving God and His Work—even if it means going against what our peers think or say. Joshua didn’t let the crowd stop him from wholehearted service to God’s Work. In turn, God didn’t stop Joshua from entering into the Promised Land! Because Joshua lived in God’s Work, God allowed him to live in a blessed land for the rest of his life.

What about you? Will you let your friends’ opinions stop you from supporting God’s Work? Will the Work of God become a side project that you only look at when you have free time—when your friends are gone for the weekend or when it’s the Sabbath and you’re at home anyway?

Matthew 16:24-27 say: “… If any man will come after me, let him deny himself, and take up his cross, and follow me. For whosoever will save his life shall lose it: and whosoever will lose his life for my sake shall find it. … For the Son of man shall come in the glory of his Father with his angels; and then he shall reward every man according to his works.”

We need to be willing to give up anything for the Work of God—to live in the Work of God now so that we can live in the Family of God for eternity. Later in his article, Mr. Flurry continued: “The way to gain eternal life and a reward in God’s Kingdom is to give up our life right now—to lay it down, and sacrifice it for God’s Work!”

I learned a lesson in wholehearted commitment during those two weeks at Edstone. That campus is full of people who have their hearts in the Work—people who are really living in the Work. No matter where you live physically, strive to always live in the Work spiritually. Put your whole heart into the effort!