Armstrong Men Take on ‘Midnight Murph’
Push-up reps in unison in the middle of the night
By Justin Goodearl & Joel Hudson-Stewart • Jan. 1, 2016 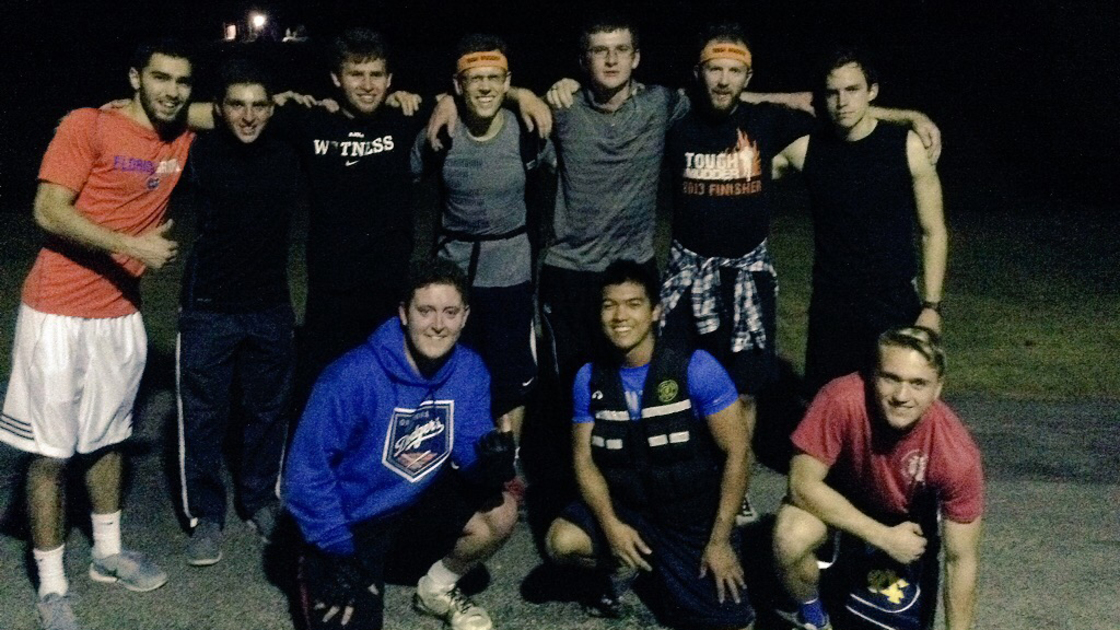 ​EDMOND—At 1:25 a.m. on November 25, 11 Herbert W. Armstrong College students met up in the John Amos Field House pull-up room with a mind ready to endure and embrace hardness. The objective: a Crossfit workout of the day that goes by the name of “Murph.”

Along with physical education instructor Joel Hilliker, freshmen Justice Brown, George Haddad and Bradley Smithies; sophomore Josue Michels; seniors Michael Cocomise and Joel Hudson-Stewart; and graduates Abraham Blondeau (2015), Grant Turgeon (2015) and Steven Privratsky (2010) took on the “hero”-level workout of the day (or night, in this instance). The challenge consisted of running a mile together, performing a total of 100 pull-ups, performing 200 push-ups and 300 squats in unison and running another mile together. The feat is intended to be done while wearing a weighted vest, for which Goodearl came equipped.

The Murph workout is named for Navy seal Lt. Michael Murphy, who was killed in Afghanistan and was awarded the Congressional Medal of Honor.

“Midnight Murph made me feel like I was preparing for battle,” warm-blooded freshman George Haddad said. “The cold wind was refreshing too, especially on the last mile. I especially enjoyed the support group of men, the band of brothers doing this intense workout together. I highly recommend everyone do it at least once.”

“I love seeing young men push themselves,” Mr. Hilliker said. “Running together, doing everything rep for rep, creates a real camaraderie. We go at the pace of the man who’s struggling the most. Everybody’s determined to make sure he doesn’t have to gut it out alone. The biggest battle is in the mind.”

The men finished the workout in an hour and seven minutes. Then they went home, cleaned up and returned to bed, the rest of the sleeping world unaware of the unique experience these brothers in fitness had shared in the middle of the night.