Are We in the Last Days?
Even to the casual observer, it is evident this world has withstood a series of profound crises over the last decade.
By Stephen Flurry • December 2013 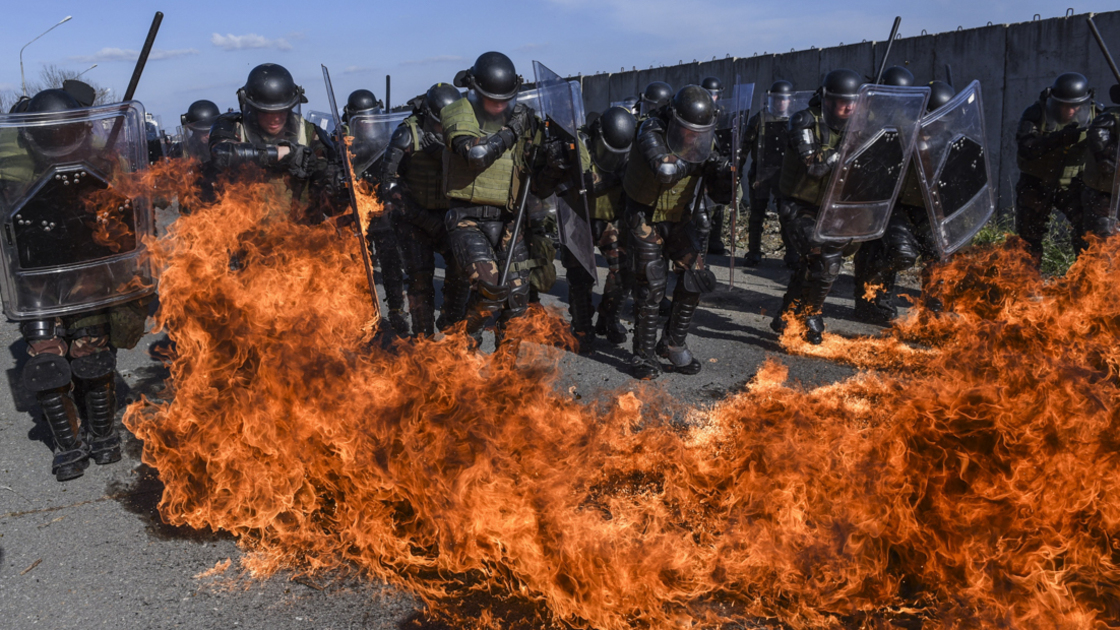 In 2004, a devastating earthquake rocked the Indian Ocean, which triggered a massive tsunami that wiped out 230,000 lives. Nearly a quarter of a million people were swept out to sea. A similar catastrophe occurred in March 2011, when Japan was pounded by an earthquake, tsunami and subsequent nuclear crisis.

In July 2005, radical Islamists bombed the London underground rail system, killing 56 people and injuring 700. A month later, Hurricane Katrina plowed into the Gulf Coast, killing more than 1,800 people. It was the deadliest hurricane to strike America in more than 75 years.

In August 2006, Iran started the Second Lebanon War by orchestrating the kidnappings of Israeli soldiers. There was the Hamas takeover of Gaza in June 2007, which has proved to be a continual thorn in Israel’s side, as hundreds and sometimes thousands of rockets fired from Gaza strike Israeli soil every year. In September 2007, Israel bombed Syria’s nuclear facility. Some analysts said this nearly started World War iii.

In 2009, the new leadership in the United States spent the year courting its traditional enemies while at the same time sticking it in the eye of its allies. Israel went to war with Hamas in Gaza, Iran crushed a democratic uprising called the Green Revolution, and the Lisbon Treaty became Europe’s new constitution. That same year, Europe was rocked by an economic crisis, which opened the way for Germany to ride to the rescue.

In 2010, for all intents and purposes, Iraq fell to Iran. The American dollar came under assault. America’s strong traditional ties with Israel unraveled. Britain surrendered its military sovereignty. And then there were the natural disasters: 2010 was one of the deadliest years on record. The Associated Press called it “the year the Earth struck back.”

Today, the world faces an ever radicalizing Islamist movement in the Middle East. That movement’s momentum has greatly accelerated since February 2011, when the U.S. helped oust Egyptian President Hosni Mubarak. Right now, we see a last ditch attempt by Egypt’s military to suppress the Brotherhood’s power, but the secularist military is operating on borrowed time. This is especially true now that is has lost the U.S. funding that long helped it contain the Brotherhood and Egypt’s other radical Islamists.

In Syria, civil war rages, claiming over 120,000 lives to date. Meanwhile, the nation is becoming the center point of a dividing line between Sunnis, Shiites (often radical Islamists) and European allies.

Last year, we witnessed the infamous attack on the United States consulate in Benghazi, Libya. Just weeks later, Americans reelected Barack Obama and with him, the most radical leftist administration this country has ever seen. Earlier this year, we saw another deadly terrorist attack on American soil in the Boston bombing.

Multiple political scandals have also hit the headlines this year: revelations of a deliberate cover-up after the Benghazi attack; the Department of Justice admitting to monitoring AP and Fox News journalists; the Internal Revenue Service being exposed for targeting known conservative groups to influence the 2012 election; National Security Agency leaks showing the government has been collecting phone records and vast amounts of Internet data from ordinary American citizens for years. In October, we had the government shutdown, revealing paralyzing division in America’s political system.

Given these many earthshaking events, is it any wonder why many people now believe we are living in the prophesied last days of this age?

In his booklet Are We in the Last Days?, Herbert W. Armstrong wrote, “Time was, when some wild-eyed freak shouting a ‘doomsday’ warning was ridiculed as ‘off his rocker.’ But today serious world leaders and scientists are saying grave things about the current drift in world conditions.”

Added to that, never before in history—until this generation—has it been possible for man to destroy all flesh from the Earth. This, in itself, makes it possible for the prophecy of Matthew 24:22 to be fulfilled: “And except those days should be shortened, there should no flesh be saved: but for the elect’s sake those days shall be shortened.”

In 2 Timothy 3:1 Paul warned, “This know also, that in the last days perilous times shall come.” The word perilous can also be translated dangerous. These dangerous times are upon us now!

Commenting on this prophecy, Mr. Armstrong wrote, “When I was a little boy, 90 years ago, those conditions were not true or escalating as they have been within the last 20 or 30 years. … The weapons have never existed in all history that could have laid all cities waste until the hydrogen bomb of some 30 years ago. How significant that this became possible only during the time while this gospel of the Kingdom was going from nation to nation into all the world for a witness to all nations.”

2 Timothy 3:2 describes human nature in all of its ugliness. People today are “lovers of their own selves”: They couldn’t care less about the needs or desires of other people. Everywhere we see lovers of money, materialism and radical individualism—people who are contemptuous of God and His law and who aggressively promote the upside-down families spoken of in Isaiah 3. Paul also says people are unholy, unthankful and without natural affection, and we love pleasure more than we love God. It all has a “form of godliness,” but it’s just a show.

God says we deny His authority by our rebellious actions! The Bible no longer bears any direct authority over people’s lives. The miraculous events of Scripture are explained away as fable or old wives’ tales. People may claim to be religious, but they don’t really believe that God will intervene and change world events. They deny that Christ will return and rule this Earth with a rod of iron, even though dozens upon dozens of prophecies describe that soon-coming reality.

The world is filled with churches, which send hundreds of “missionaries” into foreign lands, telling people about Christ. Yet His message, the good news of the Kingdom of God, they deny. The true gospel they oppose. This world has been deceived by a counterfeit gospel about Christ the person. His actual message has long been forgotten.

“From such turn away,” Paul says. He describes this generation as ever learning, but never able to come to the knowledge of the truth (verse 7). The Greek word ever in that verse means at all times or always. In other words, Paul is describing a generation where there has been an explosion of materialistic knowledge. And yet we are further from the truth than ever before! This is the “great paradox” Mr. Armstrong spoke of on so many occasions. Advances in science have not put an end to war and suffering—instead, we have seen tragedies increase.

And yet, many people still deceive themselves into thinking there is no special danger right now—that the world has always been like this. Of course, this is true in part. From the very beginning, it was man, under the influence of Satan, who introduced this world to selfishness, destruction and death. But 2 Timothy 3 tells us that in the latter days, world events will take a dramatic turn for the worse.

This, coupled with the stark reality that never before has human annihilation been possible as it is today, ought to wake us up!

In Matthew 24, the disciples came to Christ and asked Him what would be the sign of His coming and of the end of the world.

Notice the first and most important warning Christ gave them: “And Jesus answered and said unto them, Take heed that no man deceive you. For many shall come in my name, saying, I am Christ; and shall deceive many” (verses 4-5).

This religious deception is the first horseman of the apocalypse! (Revelation 6). It is not just about deception from false, non-Christian religions. People are going to be deceived about Christ and His message—about what true Christianity really is.

Christ went on to say, “And ye shall hear of wars and rumours of wars: see that ye be not troubled: for all these things must come to pass, but the end is not yet. For nation shall rise against nation, and kingdom against kingdom: and there shall be famines, and pestilences, and earthquakes, in divers places” (Matthew 24:6-7).

All this is only the beginning, He says in verse 8. These end-time events, Jesus continued, are leading to a world war, the likes of which this Earth has never seen (verse 21). Without God’s intervention, mankind would literally destroy itself (verse 22).

“Many other scriptures show that conditions will become more frightful than ever before or ever shall be again on Earth,” Mr. Armstrong continued in Are We in the Last Days? “Such conditions are rapidly escalating at this moment. Person is against person, even within a large proportion of families. Group is against group. Nation is against nation. Violence is escalating as never before in history. Terrorism is throwing fear and consternation into people all over the world.”

But we can thank God that all these self-inflicted curses will culminate in the prophesied return of Jesus Christ: “And then shall appear the sign of the Son of man in heaven: and then shall all the tribes of the earth mourn, and they shall see the Son of man coming in the clouds of heaven with power and great glory” (verse 30).

Jesus Christ will set foot on this Earth for the second time, arriving in the exact same manner He left the first time (Acts 1:11). This time, however, He isn’t coming to sacrifice His life for the sins of a rebellious mankind. This time, He is coming to forcibly put an end to human suffering and death, and to set up the Kingdom of God—the royal Family of God that will administer God’s righteous government over all the Earth!