The Value of Obedience
God values obedience. Do you?
By Reese Zoellner • Nov. 4, 2015 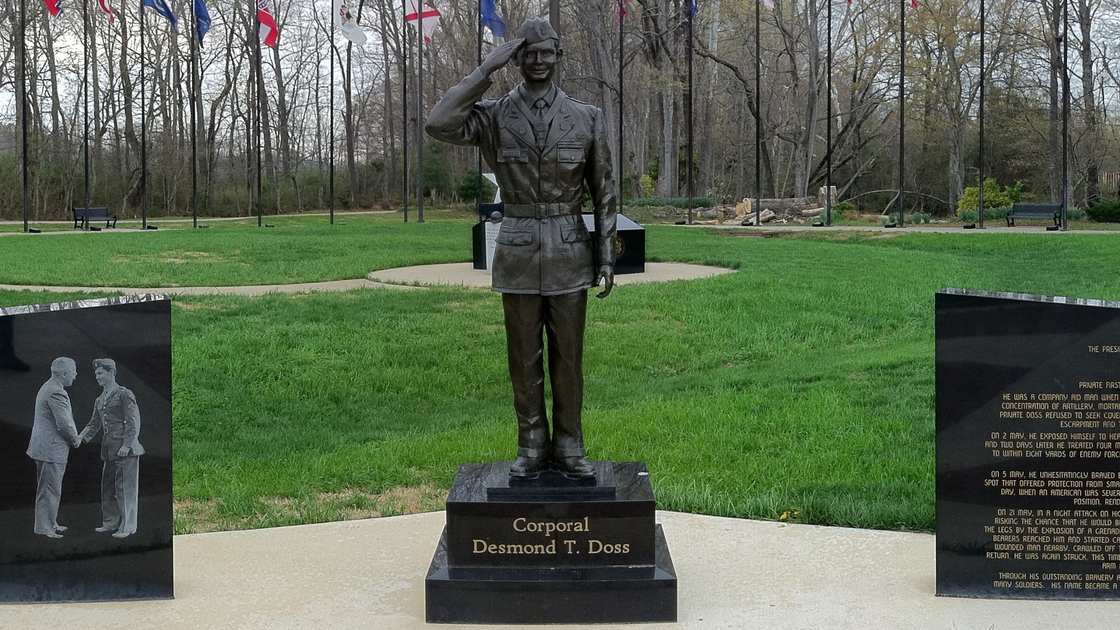 In a war against a vicious enemy, what type of comrade do you want by your side? A soldier eager to fight the enemy? Or a pacifist who won’t even touch his rifle? The better option is obvious. In our spiritual war we must be eager to fight our enemy, we must win against our adversary, and we need comrades who are eager to fight as well.

But what if you were in a physical war, with real bullets, real blood, a real vicious enemy, and a very real sense of your own mortality—what type of comrade do you want now? I’m sure your answer didn’t change. You want the man who can inflict catastrophic damage on the enemy; you want a man who will dispose of those who come to kill you; you want the biggest, baddest, meanest man in the company watching your back. Easy answer, right? But what if that man disobeys God and the pacifist obeys God? Who do you want now? The choice is probably a little fuzzier than before.

In a physical war, is an obedient man of God as valuable as a gun-slinging bruiser? Would we value obedience enough to displace our carnal customs of self-preservation? This article will examine the true value of obedience by examining the examples of two soldiers.

Our first soldier is King Josiah. Josiah was one of the greatest kings the nation of Judah ever had. He eliminated idolatry in Judah; he smashed the high places and groves; he cleansed the temple, burned the bones of the evil priests, and organized the greatest observance of the Passover in all of Israel’s history (2 Chronicles 34-35). He was an amazing king.

But Josiah’s life ended tragically. 2 Chronicles 35:20-24 record the details of his death. Necho, king of Egypt, marched north to fight at Karkhemish. The land of Judah lies directly between Egypt and Karkhemish, so Necho had to march through the land of Judah. Josiah went out to attack Necho at the valley of Megiddo. The king of Egypt told Josiah that he ought not to interfere with his business because he was on a mission from God. Necho warned Josiah not to meddle with God’s purpose lest God destroy him. Really, this was a command from God, not Necho, to leave the Egyptians alone.

Josiah disobeyed God. He knew not to, but he went out against Necho and his army. Necho’s archers drew their bow against Josiah and pierced him through. He was carried back to Jerusalem and died. What a tragic end to an otherwise stellar kingship. There is a price to be paid for disobeying God. Josiah paid for his disobedience with his life.

Our next example is not in the Bible. This man was never in the God’s Church, he didn’t have all of God’s truth, but he had the Ten Commandments. His name was Desmond Doss. Doss was born in 1919 to a very religious Seventh-Day Adventist family from Lynchburg, Virginia. He was taught as a youth that all 10 of the commandments were still in effect and that he should observe them. He strove to keep them all through his life even when it was hard, even when it was seemingly impossible, even if it would bring scorn and ridicule, even when it seemed dangerous. Two of those commandments in particular would prove very hard to keep: honor God’s Sabbath and don’t murder.

Doss decided as a youth that he would never even touch a firearm in his observance of the Sixth Commandment. But the timing of his birth was not conducive to a life without fighting.

When World War ii broke out Doss knew he was likely to be drafted. He loved his country, and wanted to help any way he could. But he knew that serving in the military would probably mean being ordered to kill. He registered for the selective service on his 18th birthday, just as all American men are required to do, and he waited to see if his number would come up. While he waited, he received medical training to increase his chance of serving as a medic instead of a rifleman.

Doss’s number came up in 1942. When he reported for duty, he tried to tell the registrar that he was a non-combatant, but the Army doesn’t recognize non-combatants so he was branded as a conscientious objector. He was placed in a conscientious objector camp full of flag burners and people who refused to wear the uniform. But Doss was no flag burner—he loved his country and wanted to serve it, he just refused to kill for it. He finally convinced the Army to let him serve. But getting out of the conscientious objector camp didn’t earn him any respect from his comrades. All through his army career he clung to God’s law. Despite attempts to have him court-martialed, he never picked up a rifle during training. Despite attempts to discharge him for mental insanity, he never learned to use a combat knife. Despite the taunts and ridicule of his comrades, he never broke God’s Sabbath.

Desmond Doss stuck to what he knew was right. He took the ridicule; he endured the peer pressure; he did every lousy job he was given on Sunday morning to make up for his day off; and he never caved. He resolved to stay firm in his beliefs and prove his worth on the battlefield. Finally, in 1944, he had his chance. Doss was sent to the Pacific Theater of World War ii, where he would prove that God valued his obedience, even if the Army didn’t.

Six days a week, Private Doss volunteered for every mission he could, and every mission he ran made it more apparent that he was under divine protection. He would charge onto any battlefield armed with only a box of Band-Aids, shield wounded men with his body and drag them to safety. Even as those around him lost their lives, Private Doss would come out unscathed. At one point he crawled within 15 feet of a pair of machine gunners that had just mowed down five American soldiers to retrieve one of them. Then he did it again, and again, and again. He carried four wounded men to safety without receiving a scratch, where five others had fallen. He earned two bronze stars for bravery during his time in the Pacific Theater; all the while, he never compromised with the Sabbath and never touched a rifle. By all accounts he should have died several times over.

It wasn’t long before the scorn of his comrades turned to admiration, and the man who was once seen as a burden was viewed as their guardian angel. He was committed to his men. And they knew that if they were wounded, no matter how dangerous their position was Doss would get to them. Some even refused to run missions without him by their side.

It was on Okinawa that his name was indelibly written in history. His company had been called to take the high, rocky Maeda escarpment overlooking the southern half of the island. The journey to the top was extremely perilous. The Japanese were unwilling to give up a square inch of that hill. With Japanese mortars, rifle fire, and grenades constantly raining down on them, Doss and his company fought their way to the top. But when they reached the top, the battle wasn’t over. Japanese gunners were entrenched on either side of the plateau. Once enough American soldiers were on the plateau, the Japanese began to fire on them from their fortified positions. Most of Doss’s company fell wounded or killed; those who could, ran down the hill to cover. But Doss stayed on the battlefield. Private Doss knew he had a duty to save as many of his men as he could. For 12 hours he crawled around on the battlefield with the machine gunners still on either side of him. One by one he dragged 75 men (some say it was at least 100) off of the escarpment and lowered them 35 feet down a cliff to safety, by hand.

It was an incredible physical feat; it was enough to earn him the Congressional Medal of Honor. He is one of three conscientious objectors to receive that medal; out of those three, he is the only one who wasn’t killed in action. He wasn’t even wounded. Where so many men died, Doss lived. He didn’t have any power to dodge the bullets, and the Japanese soldiers certainly didn’t go easy on him because he was a doctor. The only way he could have survived that battle and those 12 grueling hours of exposure was with divine protection. One Japanese soldier later recounted that every time he got Doss in his sights, he would pull the trigger and his gun would jam. If there was any doubt of Doss’s divine protection before that day, it was cleared away. It wasn’t until a few weeks later that he finally suffered an injury, when he purposely stepped on a grenade to protect his comrades.

So what is the value of obedience? God blesses obedience. The examples of Josiah and Desmond Doss make this undeniably clear. King Josiah disobeyed God—and died. Private Doss obeyed God—and lived. Leviticus 26:7-8 say that in battle God will protect those who obey Him. The life of Desmond Doss confirms that, as does the death of King Josiah.

Maybe the choice doesn’t seem so clear right in the moment. It can be so tempting to just compromise a little with God’s law. When temptation hits, the benefit of obeying God might seem obscure and far off. But there is a benefit—God promises He will bless obedience. There might even be a situation where keeping God’s law would seem ridiculous or impractical. I’m sure at some point it seemed impractical to Doss; it probably seemed impractical to King Josiah. But God makes the choice crystal clear: “I call heaven and earth to record this day against you, that I have set before you life and death, blessing and cursing: therefore choose life, that both thou and thy seed may live” (Deuteronomy 30:19).

It isn’t just our physical life that will be saved, God promises multiple blessings to those who obey Him. “And every one that hath forsaken houses, or brethren, or sisters, or father, or mother, or wife, or children, or lands, for my name’s sake, shall receive an hundredfold, and shall inherit everlasting life” (Matthew 19:29). God will bless us for obedience; He has to, He has promised to.

The choice might seem difficult. But if we grasp its true value, the choice is very easy. Choose life. Choose blessings. Choose obedience.