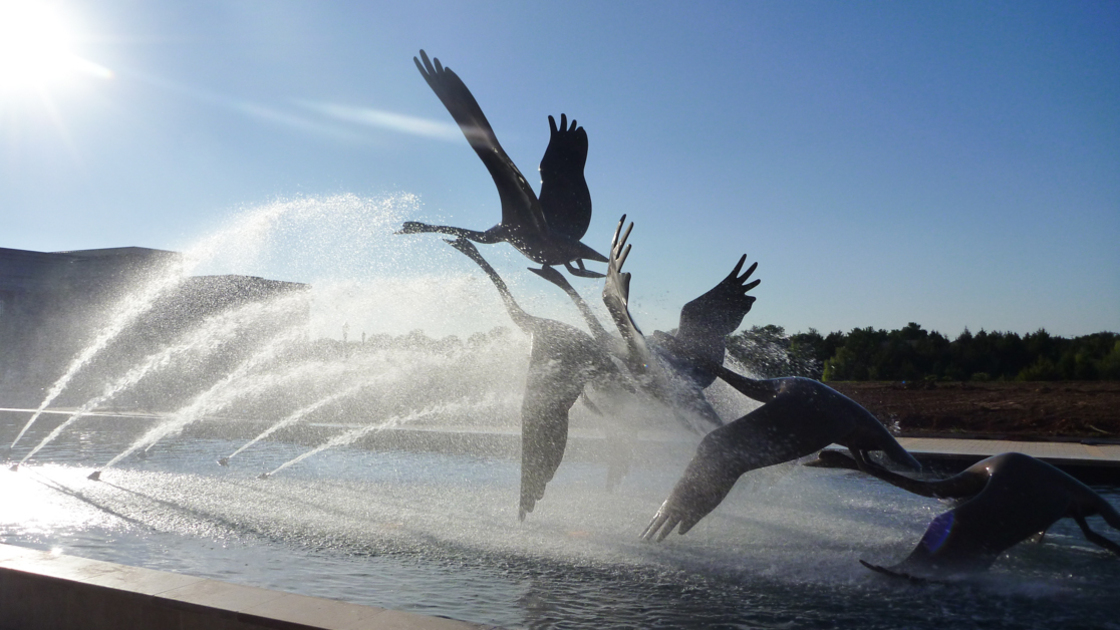 Pastor General Gerald Flurry visited the former campus of Ambassador College in Big Sandy, Texas, on April 8 to personally inspect the condition of the bronze sculpture that has dominated its entryway for over 40 years.

Swans in Flight, a bronze-and-steel sculpture depicting the five stages of a swan taking flight, was unveiled in 1968 by Herbert W. Armstrong and English sculptor David Wynne in a ceremony attended by members of the Worldwide Church of God and the local press. The artist personally oversaw the installation of the five bronze swans in a 120-foot-long reflecting pool.

Mr. Armstrong, who considered Wynne to be perhaps the greatest living sculptor in the world, commissioned him to sculpt several pieces for the Ambassador campuses in the late 1960s. In addition to Swans in Flight, Wynne created the soaring egret sculpture for the Pasadena campus, which still stands in front of Ambassador Auditorium, and Nestling Swans, a white marble sculpture for the campus in Bricket Wood, which was eventually moved to Pasadena and installed on the lawn in front of the English Tudor mansion Mayfair. Wynne also sculpted Circling Birds in 1967, which was stored for 17 years until it was unveiled in 1984 at the top of the Grove Street stream, the final landscaping project on the Pasadena campus.

After the demise of Ambassador College, the Worldwide Church of God eventually sold the 2,200-acre Big Sandy campus in 2000 to the Green Family Trust, owner of Hobby Lobby Stores, Inc., of Oklahoma City. Green then transferred ownership to the Institute in Basic Life Principles (iblp), a nonprofit educational ministry based in Oak Brook, Ill., at the end of 2001. iblp currently leases the campus to the Air Land Emergency Resource Team (alert), a Christian training and service organization that equips young men with emergency skills necessary to assist people in hurricane, flood, tornado and other disaster-stricken areas.

In 2002, the iblp announced that the swan sculpture was for sale, and Mr. Flurry became interested in acquiring the piece for the pcg’s new headquarters campus in Edmond. After the Church began constructing Armstrong Auditorium, it became evident that a sculpture would add to the aesthetic beauty of the reflecting pool planned for the mall in front of the building.

In November 2008, the Philadelphia Church of God again contacted the iblp to inquire about purchasing the sculpture. After several months of negotiations, the parties reached an agreement. Still, Mr. Flurry wanted to personally inspect the swans before sealing the deal.

After going over it inch by inch, Mr. Flurry was pleased to find the sculpture in remarkably good condition. “The quality is just outstanding, and I don’t think there is a more beautiful sculpture of its kind in the world,” he said.

After the inspection, Mr. Flurry telephoned the pcg’s chief operations officer, Andrew Locher, and approved the purchase. The sale was completed on April 10, and the pcg now owns the sculpture.

The swans will be disassembled and transported to a foundry in Oklahoma for minor repairs and refinishing before being installed in their new home, the reflecting pool in front of Armstrong Auditorium. The sculpture and water feature will be installed just as they were in Big Sandy; the five swans will appear to soar into flight as six water jets cascade over them.

In 1994, Wynne became Sir David Wynne when he was knighted by Queen Elizabeth ii for his outstanding work, which includes his most famous sculpture, Girl With Dolphin (1973), near London’s Tower Bridge and the royal seal on the gates of Hyde Park in honor of the Queen Mother’s 90th birthday (1992). His work appears all over the world and includes numerous commissions by the royal family.

Wynne, now 83, lives in semi-retirement near London. The Church contacted him on April 14 for technical advice on how to best disassemble and reassemble the sculpture. His firsthand knowledge was extremely helpful, and he recalled with fondness his relationship with Mr. Armstrong. He was also glad to hear that the sculpture would be appreciated for years to come.