A Mysterious Prophecy
Psalm 83 tells us the nations that will not be allied with Iran when Germany and Europe conquer that nation and radical Islam.
By Gerald Flurry • May 2011 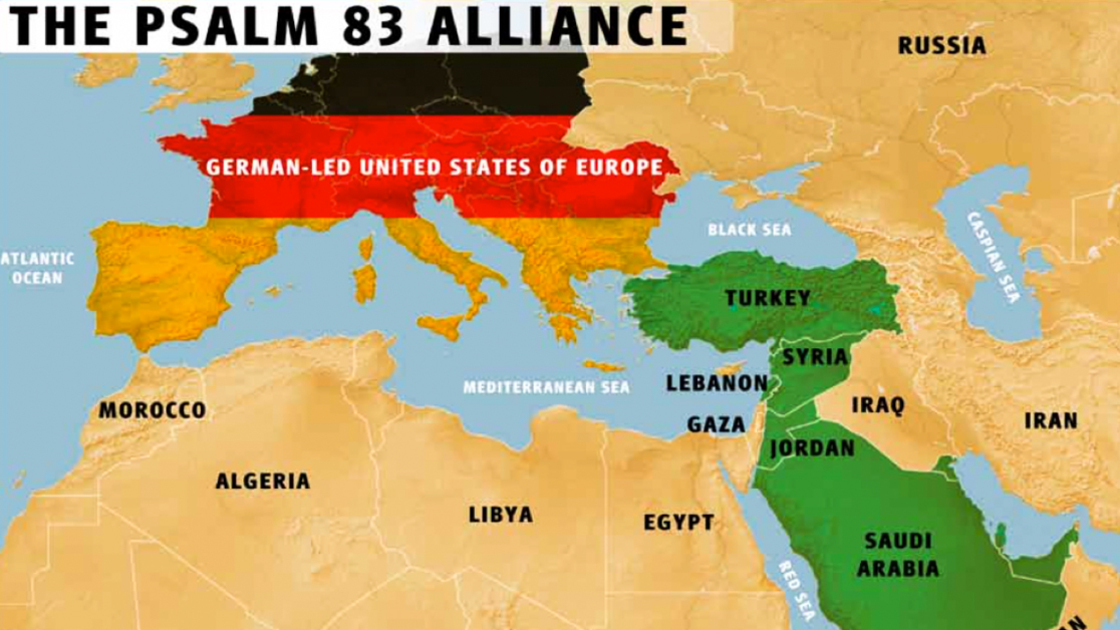 Are the Psalms only a book of charming poetry? Psalm 83 of the Bible is an end-time prophecy of Germany allying with several moderate Arab nations. It shows that these nations are about to get control of the Middle East! What they do after that is going to be the ultimate shock to America, Britain and the Jewish nation.

“Keep not thou silence, O God: hold not thy peace, and be not still, O God. For, lo, thine enemies make a tumult: and they that hate thee have lifted up the head. They have taken crafty counsel against thy people [Israel], and consulted against thy hidden [or sheltered] ones” (Psalm 83:1-3).

These enemies are conspiring against biblical Israel. (Our book The United States and Britain in Prophecy explains who Israel is. All of our literature is free.)

These enemies are also against God’s hidden (or treasured) ones. This is God’s very elect, who are always in the midst of the storm explaining what it all means. This little flock explains the significance of deadly world events. However, most people pay little attention until they become victims!

We see terrifying events all around the world, and they are intensifying. But all that bad news is a sign of the best news mankind could possibly hear: The Messiah is about to come and save us! (Matthew 24:3, 21-22).

“They have said, Come, and let us cut them off from being a nation; that the name of Israel may be no more in remembrance” (Psalm 83:4).

Israel today is comprised of 12 nations. But this end-time prophecy is directed to only three of them. The little nation called Israel is only one of those three nations; America and Britain are the other two (The United States and Britain in Prophecy explains).

These peoples’ enemies want to cut them off from being a nation (they are the descendants of the ancient nation of Israel). Their enemies don’t even want the world to remember the name of Israel!

The leader of Iran, Mahmoud Ahmadinejad, has vowed to wipe the Jewish nation off the map. The enemies of Psalm 83 have what appears to be an even deeper hatred. They even want to obliterate the biblical name of Israel forever!

This prophecy gives us an insight into what is coming in the very near future: the Great Tribulation and the times of the Gentiles (Matthew 24:21; Luke 21:24). God is going to punish these three nations of Israel more severely than at any time in their history, because of all their “abominations.”

Who Is in the Alliance

“For they have consulted together with one consent: they are confederate against thee: The tabernacles of Edom, and the Ishmaelites; of Moab, and the Hagarenes; Gebal, and Ammon, and Amalek; the Philistines with the inhabitants of Tyre [Lebanon]; Assur [Assyria, or Germany] also is joined with them: they have holpen the children of Lot. Selah” (Psalm 83:5-8). Here are the modern names of these nations, as taught at Ambassador College under Herbert W. Armstrong: Edom—Turkey; Ishmaelites—Saudi Arabia; Moab—Jordan; Hagarenes—anciently dwelt in the land known as Syria today; Gebal—Lebanon; Ammon—also Jordan. (We cannot be extremely precise in this understanding, but it gives a good general idea of where these nations are today.)

Remember this: God inspired these names to be included in the Bible so we could know who they are and how this prophecy would unfold today! We are commanded to live by “every word” of God. If we can’t understand who these nations are, we can’t understand the 83rd Psalm. God expects us to understand!

Iraq, Iran, Egypt, Libya and Ethiopia are missing from this list. They will be allied with Iran when they are conquered by a German-led Europe (Daniel 11:42-43).

It appears Iraq, with its massive oil reserves, will be solidly in the Iranian camp. I have predicted this would happen since the early 1990s!

Assur was the father of Assyria, which is the ancient name of Germany. (We prove the identity of these nations in our booklets The King of the South and Germany and the Holy Roman Empire.)

Psalm 83 tells us the nations that will not be allied with Iran when Germany and Europe conquer that nation and radical Islam.

There has never been such an alliance to attack or totally destroy Israel in history. Concerning this Psalm, the Anchor Bible reads, “History transmits no record of the national crisis when the nations enumerated in this Psalm formed a league to wipe out Israel ….” Lange’s Commentary points out, “The 10 nations who are here enumerated as being combined against Israel, are never mentioned elsewhere as enemies allied at the same time and for the purpose of annihilating Israel.” Other commentaries make the same point.

This must be an end-time prophecy!

Most of the Muslims were allied with Germany in World  War ii. They knew what Hitler was doing to the Jews, and we know the way many Muslims feel toward the Jews today. Since America and Britain support the Jews, it is not difficult to envision the Muslims and Germans allying against these two nations.

This means that the Germans have already turned politically toward their Nazi past (proved in our booklet Germany’s Conquest of the Balkans). But they are going to swing even further to the right than they did during World War ii!

This world needs to watch Germany.

The moderate Arabs today are going to share that hate-filled philosophy with Germany.

Still, God is using these nations to accomplish His plan—a big part of it being the correction of three nations of Israel.

We must not forget that Germany started World Wars i and ii. It also has a history of starting many other wars. History keeps repeating itself because we never learn its lessons!

Back in our July 2010 Trumpet issue, we wrote this: “The Kuwaiti Emir Sheikh Sabah Al-Ahmad Al-Sabah toured Europe in late April and early May, concentrating on developing closer relations with Berlin and the Roman Catholic Church.

“During his meeting with German Chancellor Angela Merkel and German businessmen on April 28, he is reported to have discussed ‘a host of bilateral relations that would cement partnership between Kuwait and Berlin’ (Kuwait Times, April 28). A Catholic official said his trip to the Vatican would enable the emir and the pope to ‘express their appreciation and friendship’ and to strengthen the ‘good relations that exist between the Holy See and Kuwait.’”

This is a powerful example of how Psalm 83 is being fulfilled even now! Such meetings are preparing the two sides to form the Psalm 83 alliance.

The April 2010 Trumpet magazine said this: “For some time, France had limited Germany’s effort in producing warships by stifling plans for a joint Franco-German effort to create a common European shipbuilding enterprise. The typical (and no doubt strategically motivated) French defiance over this deal led to a crisis. This spurred one of the German companies involved, ThyssenKrupp, to ‘renounce civilian ship production to concentrate its dockyards solely on arms production. It is entering a “strategic partnership” with the Abu Dhabi Mar Co. from the United Arab Emirates (uae). Their deal seals the military alliance between Germany and the Emirates, possibly creating the opportunity for circumventing German arms exports regulations and ending efforts aimed at forging a German/French ship production …’ (German-Foreign-Policy.com, Oct. 26, 2009). As German-Foreign-Policy.com observed, this just goes to show that ‘If a German-dominated “European solution” cannot be accomplished, Berlin will do without “Europe” and go it alone.’”

Not many people notice how powerfully aggressive Germany is becoming. This example helps illustrate how Germany dominates Europe today!

Here is an even more recent statement about Germany’s close relationship with another moderate Arab state: “Germany has supplied Bahrain with naval patrol boats dating back to the time the Middle East was destabilized by the deposing of the shah of Iran. In more recent years, German arms exports to Bahrain have been stepped up, especially arms of a type traditionally used to put down insurrection. It is from this stock of armaments that Bahrain has drawn for deployment against the Shiite rebels in recent days” (theTrumpet.com, March 21, 2011).

On Feb. 22, 2011, German-Foreign-Policy.com reported on rumors that Rheinmetall, the German armaments giant, is bidding on a contract for the further provision to Bahrain of “combat material specifically deemed for the suppression of rebellions.”

These tiny oil-rich nations discussed above are geographically attached to the southeast part of the huge land area of Saudi Arabia. We believe they are also Ishmaelites and from a biblical perspective would be considered a part of Saudi Arabia—regardless of their modern boundaries. The main issue is that Germany is building an alliance now with the moderate Arabs that is paving the way for the Psalm 83 prophecy to be fulfilled.

Saudi Arabia is also drawing closer to Germany to enhance its own security against Iran as America gets weaker and continues to withdraw from the Middle East.

The mystery of the Psalm 83 prophecy is being removed.