A Gift of Praise
Why God wanted you to have the Bible Hymnal
By Mark Jenkins • June 2, 2015 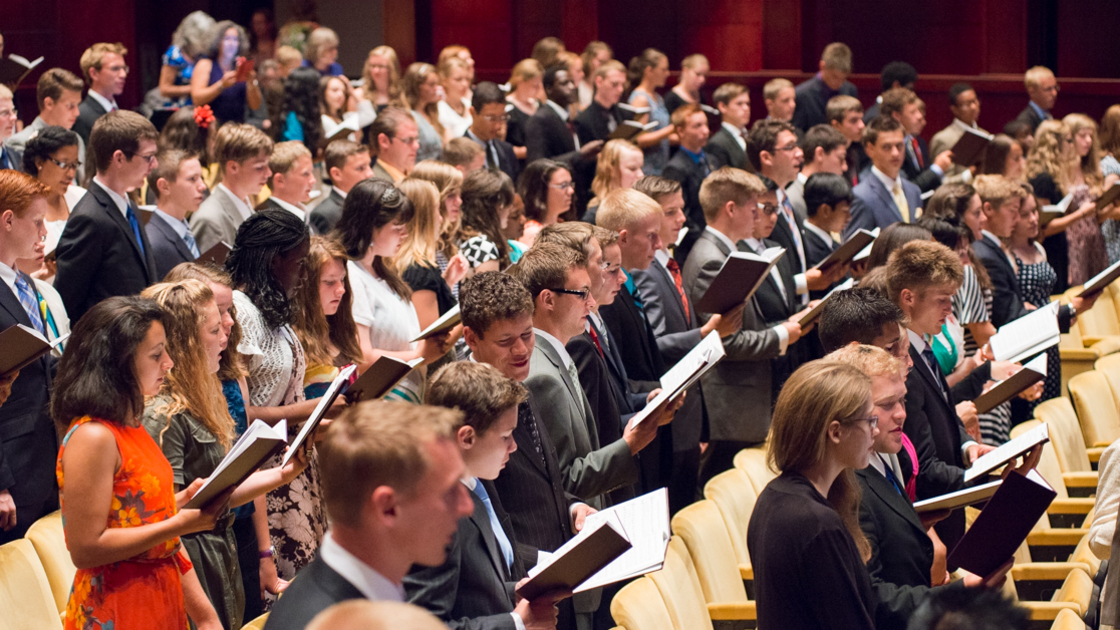 During a visit with my grandparents in Kentucky when I was about 6 years old, I attended a Baptist church service with my grandmother. Everyone stood up to sing a hymn, and I was immediately confused. The hymnal looked completely wrong, but my dad assured me that different churches had different hymnals. Initial crisis averted.

I loved singing hymns, but everything else about this church seemed completely foreign—it would be a relief to do something familiar. The congregation began to sing: “Jesus, Jesus, Sweetest Name I Know.” When this particular church used the expression “it’s all about Jesus,” they were talking about their hymns. Herbert W. Armstrong wrote in an April 1, 1984 member letter, “I had noticed that in the hymnbooks sung in Protestant churches, the words are not scriptural, and sing the praises of the congregations of people instead of the praises of God.” Not only are the hymnals in other churches typically not scripture, they have an entirely different focus. Rather than praising God, they sing about the person of Jesus or even the people themselves.

The Philadelphia Church of God’s hymnal is entirely different. Mr. Armstrong wrote that its production was a milestone for God’s Church. Have you considered what a blessing from God it is that we have the Bible Hymnal? Do we understand how important it is for us to develop a deep love for our Bible Hymnal and make a joyful noise on the Sabbath? Even as a teen, you actively participate in this part of services.

How This Hymnal Came to Be

Many of my early memories in the Worldwide Church of God connect to the Bible Hymnal, which has now been part of God’s Church for almost half a century. As a young child, I remember thinking the building on the front of the hymnal was the movie theater where we held services. I remember my extreme offense at my name being used in the phrase “Mark this you who forget your God and my instruction hate …” on page 40. I remember coming home from a satellite transmission and banging out octaves the way I had heard the pianist do on “Holy Mighty Majesty.”

Yet the importance of our hymnal is so much higher than these anecdotes show. The hymnal has become part of our heritage as members of God’s Church—as much a part of services as the messages and the prayers.

In order to fully appreciate the Bible Hymnal, consider how much effort was exerted to create it. When the pcg first produced the hymnal in 2008 for distribution at the Feast of Tabernacles, hundreds of hours went into the effort to produce it. Every hymn had to be entered into notation software so it would be correctly printed. Music director Ryan Malone and I both went through every single hymn line by line, making sure that every word was correct and that every note was in its proper place. But even considering this, the hours we spent were not even a drop in the bucket compared to the time Dwight Armstrong committed to composing the hymns.

Mr. Herbert Armstrong initiated the hymnal project in 1947. He wrote: “When we moved to Pasadena to found Ambassador College, in 1947, I asked my brother to devote full time to setting the words of psalms—and/or any other scripture—to music in the four-part harmony style of hymns.”

Notice that: a full-time employee dedicated to setting scripture to music. At the end of Dwight Armstrong’s life, his brother wrote: “He has devoted the last 35 years of his life to composing the music of these hymns for us.”

We have an amazing gift from God. On June 28, 2006, the Worldwide Church of God released the Bible Hymnal into the public domain. This is after having watched it dismantle as much of Mr. Armstrong’s work as possible and declare a Christian duty to keep his literature out of print. Now, thankfully, God has ensured that this hymnal stands freely available.

The Bible commands us seven times to make a “joyful noise,” and we have that opportunity at the beginning, middle and end of every Church service. Not only does God command we make a joyful noise to Him, He even gives a dynamic marking: “Make a joyful noise unto the Lord, all the earth: make a loud noise, and rejoice, and sing praise” (Psalm 98:4).

Yes, God commands that we sing loud. He doesn’t require that you be a professional to sing hymns—those doing special music are to play skillfully on their instruments (Psalm 33:3)—but He does require our enthusiasm!

Do you wonder how God responds to our singing in services? He tells us: “Praise ye the Lord: for it is good to sing praises unto our God; for it is pleasant; and praise is comely” (Psalm 147:1).

There is another scripture directly referring to the way we sing hymns every Sabbath at services: “Let the word of Christ dwell in you richly in all wisdom; teaching and admonishing one another in psalms and hymns and spiritual songs, singing with grace in your hearts to the Lord (Colossians 3:16).

Hymns like the ones at my grandmother’s church might sound holy and religious with titles like “Amazing Grace,” “Jesus, Jesus, Sweetest Name I Know” and “Just as I Am,” but they are nothing like the songs we have in our hymnal. Our hymns are scripture.

They are taken straight from the Bible. Remember that much of the Scriptures were, in fact, written as music originally.

Mr. Herbert Armstrong acknowledged how important it was that our hymns be scriptural. In fact, ensuring that the congregations were singing biblically inspired words of God was the primary reason for our hymnal’s creation: “When I was holding the meetings in a one-room country schoolhouse eight  miles west of Eugene, Oregon, in July and August 1933, which resulted  in the start of the Philadelphia era of the Church of God, a local  80-year-old Bible student refused to join in singing the hymns.  Having no hymnal of our own I was forced to use one of the somewhat thin paperback Protestant songbooks. The elderly Bible scholar said, ‘It is  just as sinful to sing a lie as to tell one.’ I had to agree. For some  time I had realized that many of the standard hymnals contained songs  that were unscriptural.

“It is, however, scriptural to sing hymns. Jesus sang hymns. After His  last Passover, it is recorded, ‘And when they had sung an hymn, they  went out into the Mount of Olives’ (Matthew 26:30). I knew that the  Psalms were, in fact, songs—or hymns. It was clear in my mind that  God’s people should sing God’s inspired words, not man’s uninspired and  often unscriptural words. But the Bible has not preserved nor revealed  to us the music. God has left it to us to compose the music.”

Make it a point to sing out the next chance you have at Sabbath services. Remember the work, effort and time put into making the hymnal possible. Be thankful that we are able to sing hymns meticulously set to inspired scripture. And take the opportunity to make a joyful noise to God, thanking Him for everything He has done to make our Sabbath services so special.