Lessons From History: The Charge of the Household Cavalry
Come the three corners of the world in arms, And we shall shock them. Nought shall make us rue, If England to itself do rest but true. (William Shakespeare, King John)
By James Brady • April 23, 2015 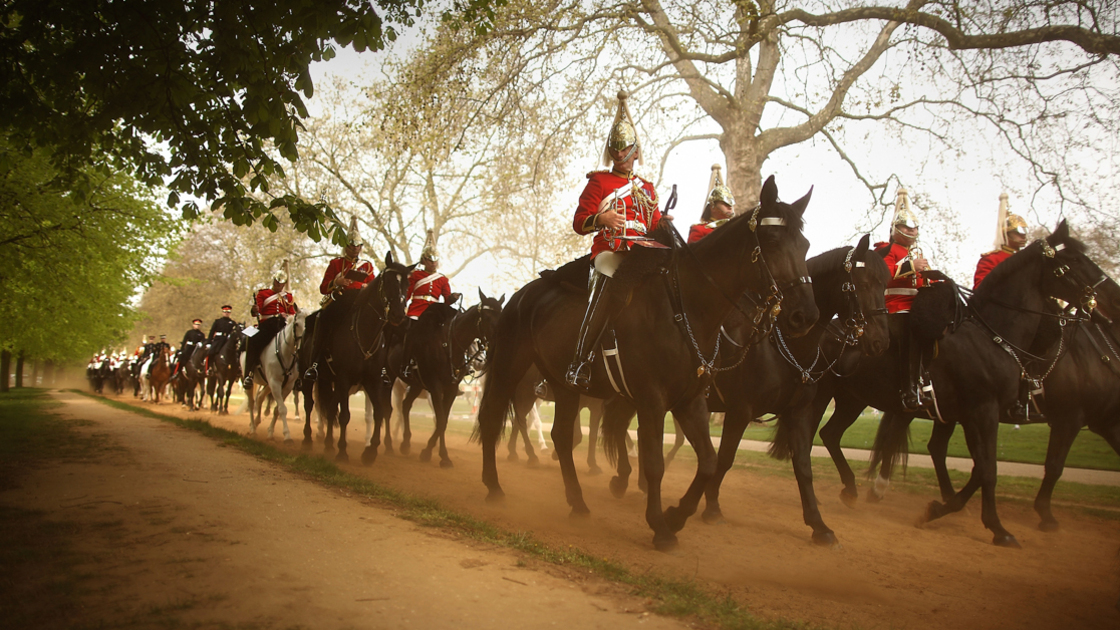 There are moments in history when everything hangs in the balance.

A fearsome European dictator—Napoleon Bonaparte of France—was on the scene again, making war, attacking smaller nations, and Great Britain had to intervene. Among the troops sent by Parliament to stop Napoleon was the king’s own bodyguard troops, the untried but chivalrous Household Cavalry. Who were these men?

Actually, you might have seen them. They rode on horses as the ceremonial escort with Prince William and Princess Kate at their wedding two years ago. Though modernized troops now, in 1815 they were horse soldiers, or cavalry. They’ve guarded the royal family for three centuries, the Household Cavalry themselves having been descended from knights of the Middle Ages. They are warrior servants of the royal household. Their code of chivalry required the qualities of courage, generosity, courtesy and loyalty, as well as a deep desire to protect the vulnerable—women, children, the poor, the elderly and, in this case, weaker nations. This was their upbringing. In a world of danger and oppression, these aristocratic, cultured men were bred to be heroic. And they didn’t care for dictators.

But battle experience? This cavalry had none—yet they were about to stare down Napoleon. So it was that on June 18, 1815, the Household Cavalry awaited its part in one of the most famous military campaigns in the history of the world, as it reached its decisive moment in the rye fields just south of a little Belgian village called Waterloo.

That morning, the Household Cavalry Brigade calmly watched as the French Grande Armée threw a spectacular parade for Napoleon, who had just returned from his forced exile on the Italian island of Elba. No one who witnessed the display—on either side—would ever forget the admirable grandeur of the fanfare trumpets, marshal music, torrents of shouts, and cheers of devotion. Napoleon’s army had just crushed the Prussian Army at Ligny, and its soldiers were ready to die to recover past glory. Meanwhile the British Army was much smaller, supported by unreliable allied troops, and had considerably fewer cannons and horses.

All went quiet. The two armies were drawn up on opposing low ridges. The British were behind the crest of their ridge, using it as a partial shield from French cannon fire. The Household Cavalry occupied a spot in reserve, just left of the British center. It waited patiently as the faint echoes of fighting over on the right erupted. Suddenly, the thunder of cannon fire—pounding, rhythmic, staccato—resounded from the valley. The remaining British and the Household Brigade endured this for a seeming eternity, but held. This was only the beginning.

The cannonade stopped, and silence returned only to be interrupted by the chilling, unforgettable beat of the pas de charge (French infantry drumrolls), accompanied by more trumpets and shouts of “Vive le emperor!” This was the French infantry beginning its advance, formed into a massive block-shaped column of men so large that none of the British infantry veterans had ever seen the like. No less than 18,000 French soldiers, an entire corps, were packed together for maximum physical and psychological effect. The block shape made it impossible for cavalry to attack it successfully. Thundering along the flanks were French heavy cavalry, cuirassiers, with helmets and breastplates glittering in the sun—considered invincible. The massive formation ebbed up the slope, presenting proud banners of dozens of past victories. British artillery moved forward on the crest, raking the French with gunfire as they ebbed forward, yet availing nothing. On they came.

As the fearful drumbeat beyond the crest drew closer, the Household Cavalry witnessed what would surely be its army’s calamity: the remains of a brigade of Belgian troops who were allied to the British but bloodied and shaken by cannon fire. They came swarming over the crest of the ridge in wild flight before the advancing French infantry column to their front. They disappeared into a nearby forest, and all that remained was 3,000 Scottish Highlander (British) infantry to hold the line versus 18,000 French and their cavalry—only yards away. The column was nearly at the crest. Napoleon had thought the chances of victory were 90/10 in his favor, and they seemed to be improving by the minute. Within the next quarter hour, those odds would be hammered down to 40/60.

An officer rode back to the Household Cavalry. A bugle sounded, and 1,200 gleaming swords came out in unison. A second bugle call, and the Household Brigade started slowly forward.

The French infantry were past the crest when, at close range, the Scottish infantry opened fire, charged with a shout, and dented in the front ranks of the column. The Highlanders pulled back and both sides began to regroup.

Nearby, British Infantry Captain John Kincaid looked right and caught the dazzle off the breastplates of the French cuirassiers. They were galloping in through a plowed field. He was determined to not die without a gesture, so he reached for his sword—but it was rusted inside his scabbard, stuck! Suddenly, rumbling from behind and to the right were hundreds of scarlet-clad horsemen, bounding over a hedgerow, sweeping over the crossroads, crashing headlong into the French cuirassiers, knocking—no, catapulting—enemy riders off their mounts, pushing their horses backward down the hill, plowing through and over the French infantry—a scarlet tide flowing down the hill, overflowing every obstacle and obstruction, and wreaking havoc. It was the Household Brigade.

Somehow, the French infantry had been unable to “form square” to repel the horses. The French who were not trampled or cut down became a herd; many others played dead and then ran. The invincible column was being swept down the hill and its cavalry escort with it! The Highlanders and another cavalry brigade joined in to the din of bagpipes.

Both armies watched the shocking spectacle. The Household Cavalry was now streaming through the massive body of French infantry, slashing with sabers, but taking point-blank musket fire in return. Casualties on both sides were terrible. The horses were winded and shot, many of the riders were fighting on while wounded, and more French cavalry was coming. They were in grave danger and getting back to British lines would not be easy.

But as the riders cut their way through the French mass and came out the back end, they did not stop. The commanders and troops of both sides watched in amazement as the British cavalry went straight for the French grand battery—the cannons that had been doing so much damage to the British Army. A vicious blast from the guns discharged, and riders and horses went tumbling. Still, they didn’t stop. Charging forward, they took most of the battery out of action permanently.

French lancers now closed in, riding through the area where French infantry corps once were. An officer pointed to the enemy lancers and said: “That’s the way home, boys.” Then the Household (and Union Brigade) Cavalry, with their horses now hopelessly winded, charged once again with a holocaust of lance thrusts. Casualties soared—and then it was over. British light dragoons rescued and escorted back the Household and other cavalry.

Half their number lay dead or wounded in the rye, along with the French infantry corps they had just demolished. With bagpipes skirling upon the ridge, the remnant of the Household Brigade staggered up to the British. They were greeted by cheers and applause from the entire army—even the Duke of Wellington himself rode over to thank them. The battle was far from over, but victory was now possible because of their sacrifice.

Numerous powerful nations tried to snuff out the dim light of justice and freedom in Britain with attempted invasions. Other times the British stepped out to stop European tyrants—Louis xiv, Napoleon, Kaiser William and Hitler. Fittingly, as pointed out by William Manchester, Britain’s rallying cry became a passage from Shakespeare’s King John:

Come the three corner of the world in arms,

And we shall shock them. Nought shall make us rue,

If England to itself do rest but true.

The astounding success of Great Britain’s empire after 1800 was prophesied by God, and the British were blessed in battles like Waterloo—and the extraordinary timing of the charge was miraculous. But the Household Brigade didn’t leave it to others—it laid it all out on the fields of Belgium so others wouldn’t have to.

You, being of the household of God (Ephesians 2:19), have the grand chance to be of His very own royal guard cavalry, if you so choose. It is a far more hope-filled job, and it requires great chivalry. How hard are you willing to charge? Look down the line, see the glinting sabers of your mates rise, grab tight the reigns, and go! Your destiny is to be of the household of God, riding not to save Europe, but the whole world!