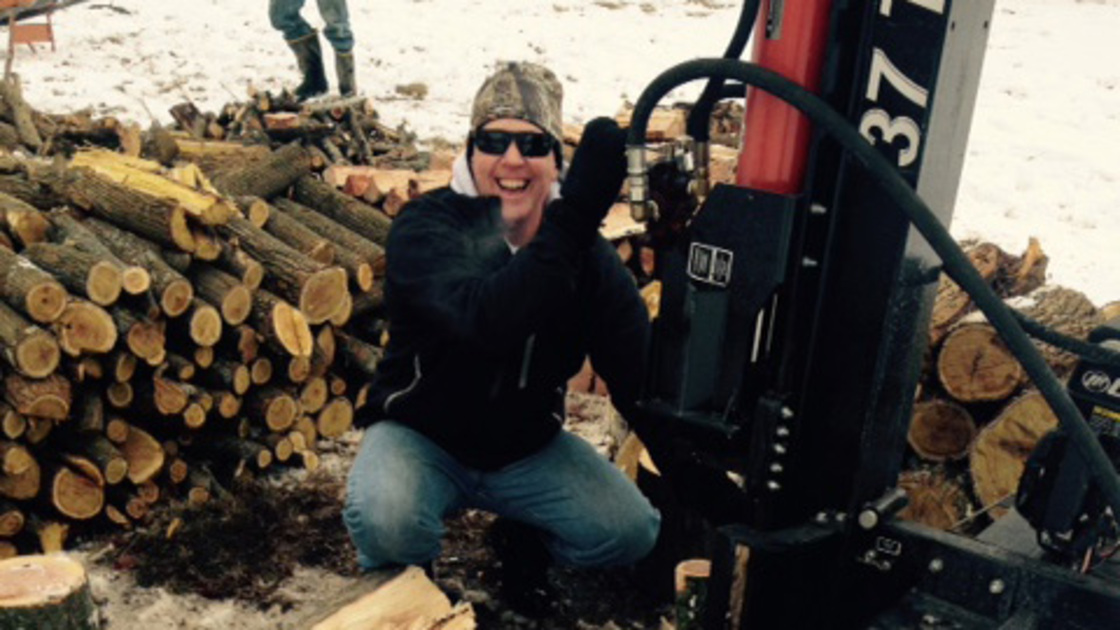 MISSOURI—Nineteen members of the Kansas City congregation braved the winter weather to fell and stack oak and hedge trees on March 1 to season and sell later this year for the local activity fund.

A variety of ages and abilities turned out to member Cody Murphy’s residence in Harrisonville with saw, ax and wheelbarrow in hand to cut and split firewood.

Snow was forecast for the morning but was replaced by sunshine. To everyone’s surprise, a gas powered hydraulic log-splitting machine arrived early in the day, courtesy of a member’s non-member spouse. This dramatically conserved manpower and shortened the process of chopping wood.

By the end of the day, the team cut and stacked well over two cords of wood without injury.

“One of the highlights of the day was the fresh snowfall, which made it fun for the children and challenging for the adults,” Preaching Elder Eric Anderson said. “But oftentimes, it is working through adversity to achieve a common goal that God’s people are drawn closer together.”

At the beginning of the day, Murphy organized and assigned the volunteer lumberjacks to their respective jobs. Some manned chainsaws while others loaded the freshly cut logs into wheelbarrows and transported them to be stacked or split, depending on size.

Between throwing snowballs, exploring the woods, and catching rides in the empty wheelbarrows, many of the congregation’s youngsters helped load and stack the chopped wood.

Eleven-year-old Hali March said it was an unforgettable experience. “My favorite part was stacking the wood and keeping things in order,” she said. “I will never forget the sound of the chainsaws and the crashing of the trees as they fell.”

While the woodcutting crewmembers busied themselves outside, some of the ladies bustled about inside the home preparing food.

“This was a full-on operation that required all of us to pitch in and cooperate to be efficient and productive,” Murphy said. “Each member was able to practice ‘embracing hardness’ with a smile.”

The activity served as a break from the area’s traditional summer garage sale. The idea came to Murphy when he read a Philadelphian article that reported on a woodcutting fundraiser in Australasia. Not only did the event allow for teambuilding among the local pcg members and their families, but it also provided welcomed tree removal on the 5-acre, wooded Harrisonville property.

“It just so happens that most of the excess trees were oak, hedge and locust—three of the best tree species for firewood,” Murphy said. “God is always planning way ahead!”

Many of the participants labored from about 10 a.m. until dusk, each putting in close to seven hours of work. The crew plans to volunteer for at least a couple more woodcutting parties later this year to add to the woodpile and eventually their local funds.

Murphy estimates about nine to 10 cords of wood could potentially be gleaned from his property, split, seasoned and sold this year, yielding anywhere from $1,500 to $2,000 in profits.

“The whole experience of the brethren working together in harmony and having the chance to have extra fellowship beyond Sabbath services was wonderful,” Mr. Anderson said. “The camaraderie built that day was tangible.”