Mastery of the Ages
Solving the greatest mysteries of all time will help you conquer the most monstrous threats facing you today!
By Ryan Malone • Feb. 24, 2015 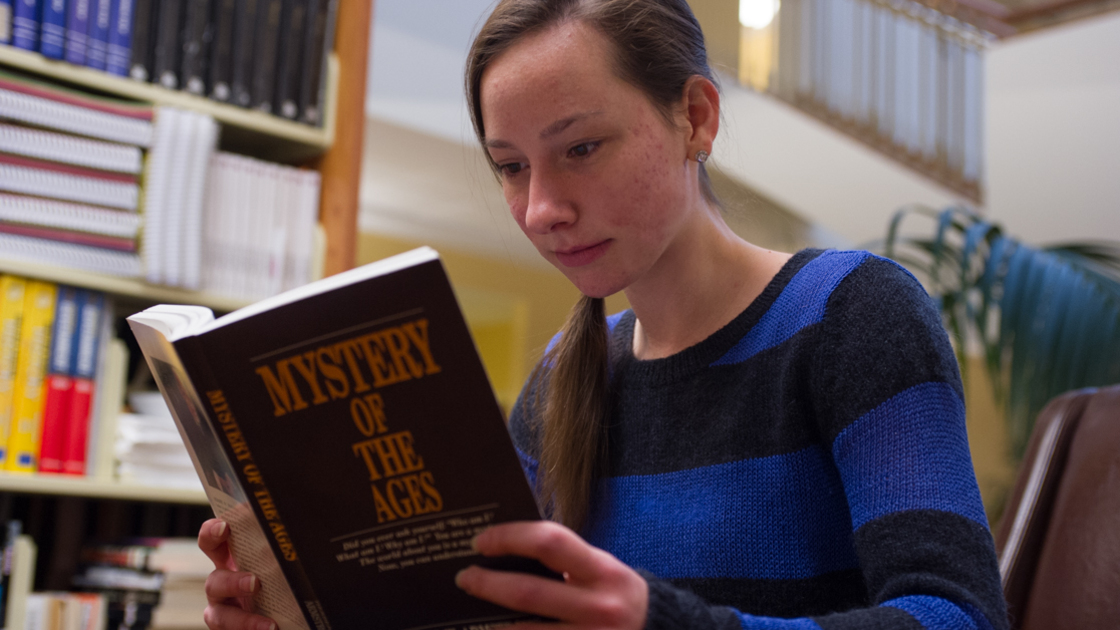 If you’ve ever been strapped into a harness for anything, or locked yourself into something, put on a helmet, or even fastened a seat belt, then you have been in a situation where injury or death was a conceivable outcome.

We take certain precautionary measures in this physical world to lower or eliminate the odds of certain peril. What about the spirit world? How can we ensure our survival in this dimension, in spite of all its dangers?

In this most dangerous hour of man’s history, God has given us a specially designed weapon to combat the influence of Satan and his demons: Mystery of the Ages.

The Bible discusses people who have physically died but yet have inherited eternal life. Although they are dead in the physical world, they will live on in a spiritual realm—another “dimension,” as some might call it.

Pardon the analogy, but if you have ever “died” in a computer game, or even a board game, you know that you are still alive in the real world—just not in that virtual world. Now think of this physical world as the virtual world (the play world), and think of the spiritual dimension as the real world—except what we do in this virtual, physical, play world does affect our spiritual survival.

We are all, of course, physical beings, bound by—and naturally only aware of—physical things.

It’s a challenge for young people to stretch their minds and imaginations to conceive of this invisible world.

It is an exciting world, the Holy Bible tells us, consisting of an all-powerful God, who identifies himself as the Most High over the entire universe, and Father of another all-powerful God, Jesus Christ, through whom the Father created all things. They perform these powerful acts through a spiritual force known as the Holy Spirit.

In this realm also exist their created helpers—secret messengers, in fact—known as angels. Some time ago, a segment of these angels rebelled against their Maker and became demons. At the head of this rebellion, was one of the highest-ranking angels God had created—Lucifer—now called Satan, meaning adversary. He opposes all God is doing.

Though this is all invisible to us, it does not negate its reality.

When God created mankind—as clay prototypes of more God beings—Satan resolved to devastate this particular creative effort of God’s. Mankind was a physical being, and so Satan would simply have to keep humanity distracted from the spiritual, unaware of the spiritual—or at least deceived about the spiritual. And so human civilization has continued under that deception for about 6,000 years.

Satan is described in the Bible as deceiver of the whole world (Revelation 12:9), the god of this world who actually blinds people’s minds (2 Corinthians 4:4), and the prince of the power of the air (Ephesians 2:2).

Now, just as you’ve never seen electricity or wind, neither have you seen radio waves, but you know they are in the air. If you tune your radio to a certain frequency, you can hear—through your radio—what messages are being transmitted through the air. Satan works similarly through the air through attitudes and moods. And just as you’ve never “seen” an attitude or mood, you have certainly seen its physical manifestations.

Throughout Satan’s reign as god of this world, the true God has worked with a small handful of people in this particular phase of His plan. Soon He will banish Satan from influencing humanity further, and God will start to open all eyes to the spiritual. In the meantime, however, only those whom God has called have any awareness of the true spirit dimension. If your parents are members of God’s Church, you have also been made aware of this spirit dimension.

Just as things can threaten your physical survival, you are also aware that certain things can threaten your spiritual life—your spiritual survival. Because of Satan’s global domination, our human minds are naturally tuned into the wavelength to pick up Satan’s broadcast. Unless we resist, we are susceptible to the moods, attitudes and impulses with which he constantly bombards us.

If this threat weren’t enough, the Bible reveals that something unusually earth-shaking happened in this end time that increased the threat on our spiritual lives. Satan the devil was cast down to Earth—and will never be allowed back into God’s presence again (see Revelation 12:7-12). He is more furious than ever, because he knows his time is short—his tenure as this world’s god is about over!

That passage in Revelation 12 reveals that when he was cast down, his first act was to persecute the Church of God (verse 13)—the only group of people on this Earth aware of this spiritual battle.

God has revealed to His Church when Satan was cast down, and how Satan’s attack occurred. He was cast down Jan. 16, 1986, when the human leader of God’s Church—Herbert W. Armstrong—died (which other of our literature can prove to you). This created great distress in the world in these past three decades, but wreaked even greater havoc on the spiritual organism that is the Church of God.

Roughly 95 percent of the entire Church was subtly seduced away from God’s truth. Its leadership led the charge in dismantling everything God had built through Mr. Armstrong. Only a small percentage held fast to God’s truth—comprising the remnant known as the Philadelphia Church of God.

Try to see this in terms of the spirit dimension: Spiritually, only a handful of people alive today have any awareness of the true God and of Satan’s subtle tactics. The fact that there is a small contingent that represents the last stronghold of God’s faithful people left on Earth makes Satan’s target a lot smaller. That should sober us to the gravity of our situation and the responsibility we have to do everything we can to arm ourselves against Satan’s attack!

The Bible likens our spiritual lives to warfare. When discussing our spiritual armor, the Apostle Paul said our battle is not against “flesh and blood, but against principalities, against powers, against the rulers of the darkness of this world, against spiritual wickedness in high places” (Ephesians 6:12). This is more intense than any virtual world, any video game, or even any physical, flesh-and-blood fight. It has serious, eternal consequences.

Our weapons, Paul said, are not physical, “but mighty” (2 Corinthians 10:4). When describing our armor in Ephesians 6, he lists one offensive weapon: the sword of the spirit (verse 17).

The Bible is described as a sword (Hebrews 4:12), and that is our most important armament. But, due to the god of this world’s deception, the Bible is a mystery. It is a coded book. It is like a jumbled pile of jigsaw puzzle pieces. It’s a file that’s locked and password protected.

So if this is our one offensive weapon in our spiritual arsenal, what good is it if we cannot understand it?

Well, we know God has revealed understanding of the Holy Bible to His people throughout the lifespan of His Church. But something remarkable happened in the history of God’s Church. In the 20th century a.d., God not only restored all things through His apostle of the time, Mr. Armstrong (Matthew 17:10-11), God saw to it that Mr. Armstrong summarized all those things in one book.

This kind of summation or explanation of the Bible had never been written to this extent ever in the history of God’s Church!

It put together the jigsaw pieces of the Bible into a clear picture. It revealed, as Mr. Armstrong titled it, the “mystery of the ages” (a title adapted from a phrase found in Colossians 1:26). In this volume, the most basic mysteries of our world—including the mystery of the unseen spirit world—were solved and clearly explained to the reader. This made it—as Mr. Armstrong believed, and as do we—the most important book since the Bible.

Mastery of the Mystery

Now consider the timing of when this book was released. Mr. Armstrong, pastor general of the Worldwide Church of God, personally handed it to a group of young college students in 1985, just months before he died.

Consider, looking at the spiritual dimension, the significance of this time period. This was just before Satan was cast down and began his last-ditch effort to destroy the Church of God. Why did God inspire it to be published then?

The pastor general of the Philadelphia Church of God, Gerald Flurry, said in his Feb. 7, 2015, sermon, that God could have revealed the entire content of Mystery of the Ages and had Mr. Armstrong publish it early in his ministry—but He didn’t. Why? Mr. Flurry said God inspired that book to be published at the end of Mr. Armstrong’s life because it was more for those who followed him to be able to withstand the attack that was coming on the Church.

Mystery of the Ages is a book for the post-Satan-cast-down world! We need this book to withstand the satanic and demonic assault that is occurring right now in the spiritual dimension!

What’s more, those of us alive today have special need of Mystery of the Ages.

Let me explain: Just two years after Mr. Armstrong died, the leadership of the Worldwide Church of God stopped distributing and then entirely discontinued Mystery of the Ages. Though, until that time, over 1.2 million people had requested it, unless you were one of those people, you would never have had the opportunity to obtain your own copy. Then, about nine years later, the Philadelphia Church of God—the spiritual successors to Mr. Armstrong—started printing Mystery of the Ages. Four years after that, a court ruling prohibited the pcg from printing or distributing this book. During that brief time, the pcg distributed about 100,000 copies of this book until barred from doing so. Then, in March 2003, the pcg announced that, in an out-of-court settlement, it had bought the copyright to Mystery of the Ages and 18 other literary works of Mr. Armstrong.

Consider this: The world has only had unfettered, uninterrupted access to Mystery of the Ages for the past 12 years. Twelve years is not a long time. As teenagers, you have lived longer than the world has had access to this book. This book is for you! It is for your day!

That presents a sobering reality. It is for you because of the perilous spiritual condition in this world. It is for you because of the present conditions of the unseen spirit world—the increased satanic attack on the world and God’s Church. You need to understand thoroughly the mysteries revealed in Mystery of the Ages so you can withstand the greatest spiritual attack any era of humanity has ever experienced.

The sheer effort that went into making this book available shows its importance to our spiritual survival. If the Bible is your weapon in this spiritual battle, then this book—that unlocks, explains and decodes it—must be used along with it! You must master Mystery of the Ages!