‘The Difference Is You’ at 2015 PCG Singles Weekend
Dozens of singles from five countries attend latest singles event in Edmond
By Grant Turgeon • Jan. 30, 2015 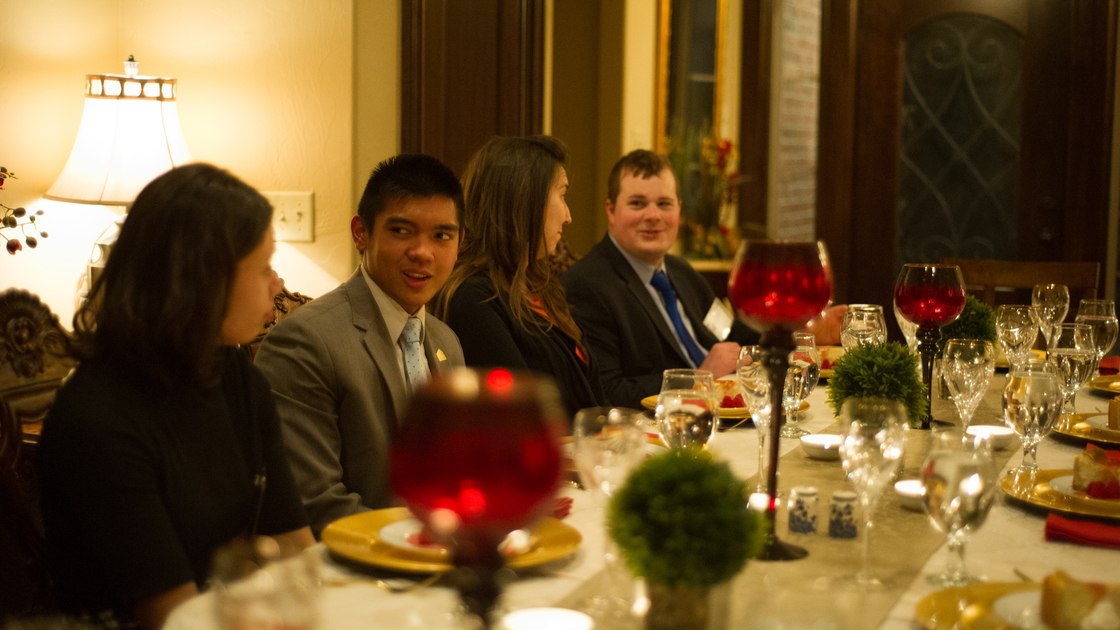 EDMOND—The Herbert W. Armstrong College campus became the bustling hub for 181 Philadelphia Church of God singles from Canada, Great Britain, Australia, South Africa and 24 American states from January 4 to 6. The three-day event carried the theme “The Difference Is You.”

The singles attended a musical theater production, shared thoughts in topics sessions, toured a museum, climbed rock walls, putted golf balls, raced across campus and put on their best to dine and converse with each other.

Pastor Joel Hilliker’s singles Bible study on the last day encapsulated the spiritual focus of the weekend. He said that each single’s contribution means a lot to the Church. For example, he said, one man can make a difference for many women by dating widely.

“The theme was so awesome because it targets being selfless,” Idaho member Ryan Woodland said. “When you get a bunch of God’s people together and all have that in mind, it unifies us even more. It helped me understand the difference we can all make with a joint effort.”

Mr. Hilliker also spoke specifically about narrowing the dating field and godly courtship. He said that Christ doesn’t choose His Bride, God does; and likewise, singles in God’s Church must faithfully allow God to choose their spouses.

“I really liked the concept of the dating diamond,” Australian member Sherry Pfotenhauer said, “explaining the process of starting dating, dating widely, and then narrowing down the field to a few prospective spouses, to finally ‘the one.’”

In addition to the Bible study, singles also received spiritual instruction from an updated and expanded version of the Single-Minded for God booklet, a compilation of 53 articles about the role of a single, godly dating, marriage preparation, parenting, and the secret to being a happy single.

On Day 1, singles watched the third performance of The Book of Isaiah in Armstrong Auditorium, a music and dance production that included 100 performers from the headquarters staff, Herbert W. Armstrong College and Imperial Academy. The musical portrayed the Assyrian siege of Jerusalem in the seventh century b.c., and the actions of the Prophet Isaiah and King Hezekiah of Judah.

“[M]y favorite part of the musical was the song Spread It Before the Lord ,” Nebraska single Lorraine Lafferty said. “We have such a special relationship with God. I think that scene so clearly depicted what prayer is supposed to be like for God’s people.”

“My favorite parts of the musical were the ones with King Sennacherib,” Kansas single Ben Arnfield said. “The character really stood out with the energy that Mr. Hilliker brought into the performance.”

On Day 2, singles divided into three age groups—18 to 23, 24 to 39 and 40 to 70—for a topics brunch at a local steakhouse. The groups were led by Preaching Elder Ryan Malone, Local Church Elder Mark Hyde and Evangelist Alex Harrison, respectively.

New York member Gary Farkas said his favorite part was “Mr. Harrison addressing us seniors as men and women with a lot of experience—singles that have a lot to offer other singles and our congregations …. He gave us the example of Mr. Gordon Davis wanting to remarry in his 70s, giving the reason why as, ‘Because I still have a lot I can give.’”

That afternoon, singles chose between three off-campus activities: a tour of the National Cowboy and Western Heritage Museum; arcade games and miniature golf at Gattitown; and climbing artificial rock walls up to 100 feet high at Rocktown Climbing Gym. The day concluded with a progressive dinner: three- and four-person groups of singles dining at one of 23 local pcg member homes for appetizers, then another home for entrees and a third home for dessert.

“I love the way the brethren of the Edmond congregation go out of their way to serve the singles by creating elaborate table settings, conversations and meals fit for royalty,” Arkansas member Wendy Bacon said. “I really enjoyed when the conversation turned to [Mr. and Mrs. Wik Heerma] telling us the story of how they met and giving a little insight on what it takes to make a marriage work.”

After the singles Bible study on Day 3, singles ate spoonfuls of salty Vegemite, attempted field-goal kicks, sang and recorded songs, impersonated the Swans in Flight sculpture, caught eggs and much more during an Amazing Race-style activity. Then they changed their jeans and tennis shoes for more formal wear and packed the John Amos Field House gym for a formal dinner dance.

“This was my first time attending a Singles Winter Weekend,” Illinois member Elizabeth Stevens said, “and it was like a mini-Feast. During each activity, I saw the generosity, cooperation and enthusiasm of the local members, the ministers and the students as they served and made us feel welcome.”

Link: “The Difference Is You” singles Bible study