Giant-Slaying Leadership
Why did Israel become so great under David?
By Gerald Flurry • July 2007 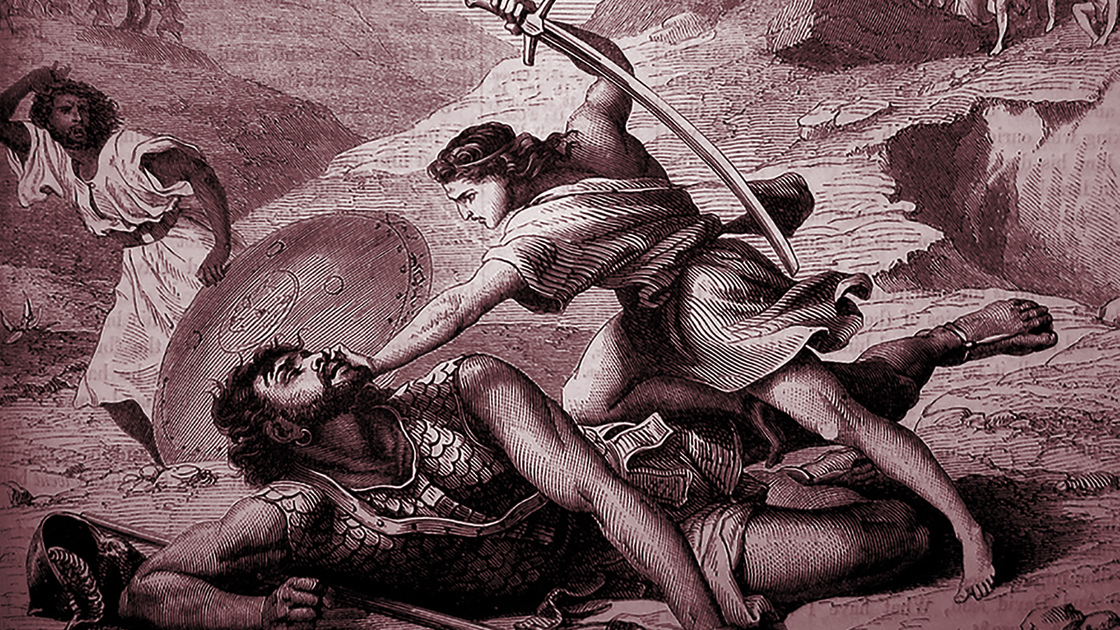 When King Saul ruled Israel, the nation suffered from a shameful lack of faith. David, a teenager, visited the army on the battlefront and saw Israel’s soldiers—who should have been the picture of faith-filled valor—cowering in fear before a Philistine warrior. “And all the men of Israel, when they saw the man, fled from him, and were sore afraid” (1 Samuel 17:24). Those men were afraid of a man! Saul offered a great reward to anyone who would step up and fight Goliath—but no one would fight even for riches (verse 25). Saul wasn’t even considering fighting the giant himself.

Why were these men so shamefully fearful? It was primarily because of Saul’s poor leadership!

Young David had a totally different spirit. “And David spake to the men that stood by him, saying, What shall be done to the man that killeth this Philistine, and taketh away the reproach from Israel? for who is this uncircumcised Philistine, that he should defy the armies of the living God?” (verse 26).

Later David asked, “Is there not a cause?” (verse 29). Can’t you all see there’s a good reason to fight here? he asked. We need to take this Philistine on!

David displayed amazing faith and courage here. He personally stepped up and killed the giant that brought such a reproach on Israel.

God later replaced Saul’s weak leadership with David’s faith-filled leadership. And with that change in government came a transformation in Israel’s military.

Here is an event from toward the end of David’s reign as Israel’s king: “Moreover the Philistines had yet war again with Israel; and David went down, and his servants with him, and fought against the Philistines: and David waxed faint” (2 Samuel 21:15). At this point, David was an old man—no longer a teenager.

Among this Philistine army was a whole mob of giants like Goliath! “And Ishbibenob, which was of the sons of the giant, the weight of whose spear weighed three hundred shekels of brass in weight, he being girded with a new sword, thought to have slain David” (verse 16). Notice what happened in the face of this threat: “But Abishai the son of Zeruiah succoured him, and smote the Philistine, and killed him. Then the men of David sware unto him, saying, Thou shalt go no more out with us to battle, that thou quench not the light of Israel” (verse 17).

These soldiers under David were valiant—a stark contrast to what they had been under King Saul’s leadership.

David’s men wanted to protect David in order to ensure that “the light of Israel” would not be quenched. What a superb attitude! These men could have defected from David, calling him an adulterer and a murderer. But instead, they were sterling examples of virtue and loyalty toward their king.

To some degree, we will all be under King David in the World Tomorrow, so we need to cultivate this same spirit!

Those men knew God was behind David. They knew that following David was the key to Israel’s success.

What a difference it makes when God is working through a man to lead His people, and the people simply follow that man!

David was a man after God’s own heart (Acts 13:22). He set a wonderful example of trusting in God, and he inspired others to do the same. We should be striving with all our being to attain David’s spiritual stature.

“And it came to pass after this, that there was again a battle with the Philistines at Gob: then Sibbechai the Hushathite slew Saph, which was of the sons of the giant” (2 Samuel 21:18). Sibbechai was yet another giant-killer cast in David’s mold.

“And there was again a battle in Gob with the Philistines, where Elhanan the son of Jaare-oregim, a Bethlehemite, slew the brother of Goliath the Gittite, the staff of whose spear was like a weaver’s beam” (verse 19). Elhanan too followed in David’s giant-slaying footsteps.

“And there was yet a battle in Gath, where was a man of great stature, that had on every hand six fingers, and on every foot six toes, four and twenty in number; and he also was born to the giant. And when he defied Israel, Jonathan the son of Shimea the brother of David slew him. These four were born to the giant in Gath, and fell by the hand of David, and by the hand of his servants” (verses 20-22).

Why did Israel become so great under David? These men wanted to do all they could to help their king. They killed giants just as David did! This faithful attitude came from David right on down through his generals.

This is how we can become the greatest possible church!

This wonderful example demonstrates the unity of command God wants His Church to have!

Each one of us should ask ourselves how much we possess this attitude. Would you stand up and fight the way these men did? Will you unify around God’s leader today the way those men rallied around David?

All of God’s ministers need to unify around headquarters. Whenever they speak, they should speak as if they were giving their message at headquarters.

Remember the example of Zadok the priest. He was the one priest who remained loyal to David all the way through. God gave him special honor for doing so. We are the sons of Zadok, and will receive special honor for eternity for demonstrating that loyalty today.

God’s ministers are given more honor and more responsibility than the rest of God’s people—and we are also judged more severely! God says that in many scriptures (e.g. James 3:1).

We live in a time of mass disloyalty to God’s government among His ministers. That terrible example has led God’s people into catastrophic lawlessness! (Ezekiel 44:10-12). Just like Saul, these leaders caused the Church to go astray.

Because of their failure, God refuses to let those men come near Him: “And they shall not come near unto me, to do the office of a priest unto me, nor to come near to any of my holy things, in the most holy place: but they shall bear their shame, and their abominations which they have committed” (verse 13). Their reward, if they repent, will be severely diminished (verse 14).

The disloyalty and faithlessness these men demonstrated is at the heart of why they went astray! They didn’t get it at all! We must take heed, because this is where we too could begin to go off track.

Remember where the revelation about the sons of Zadok came from: through the office of God’s end-time prophet. That is how God’s government works! You become a son of Zadok by understanding that revelation.

Since we are the spiritual sons of Zadok, if the revelation came through my office, couldn’t you say this office is a type of Zadok? I’m only asking a question, not making a statement.

Remember these examples. Follow the faith of the man God is using to lead spiritual Israel.

We all need to be giant-killers! God makes that possible for every one of us. That is how the body of Christ will become powerful and accomplish amazing things!

This example of David’s army of giant-killers represents the epitome of God’s government! These men weren’t afraid—they didn’t run from giants. What changed from the cowardice and timidity they displayed under Saul? What made the difference? They followed David’s example of faith! And in so doing, they grew in their love for God.

It’s not enough that David be great. Everybody under him has to be great! That is what is required if we are to have a great Church. There can be no breakdown in any link.

God’s Church needs to understand this truth better than it does today. This towering lesson in government is what will help us finish the Work with real strength!

From the Archives: Royal Vision, July-August 2007