One Man Plus God Is an Army
Are you willing to stand alone and fight? God demands that each of us do so.
By Joel Hilliker • July 24, 2014 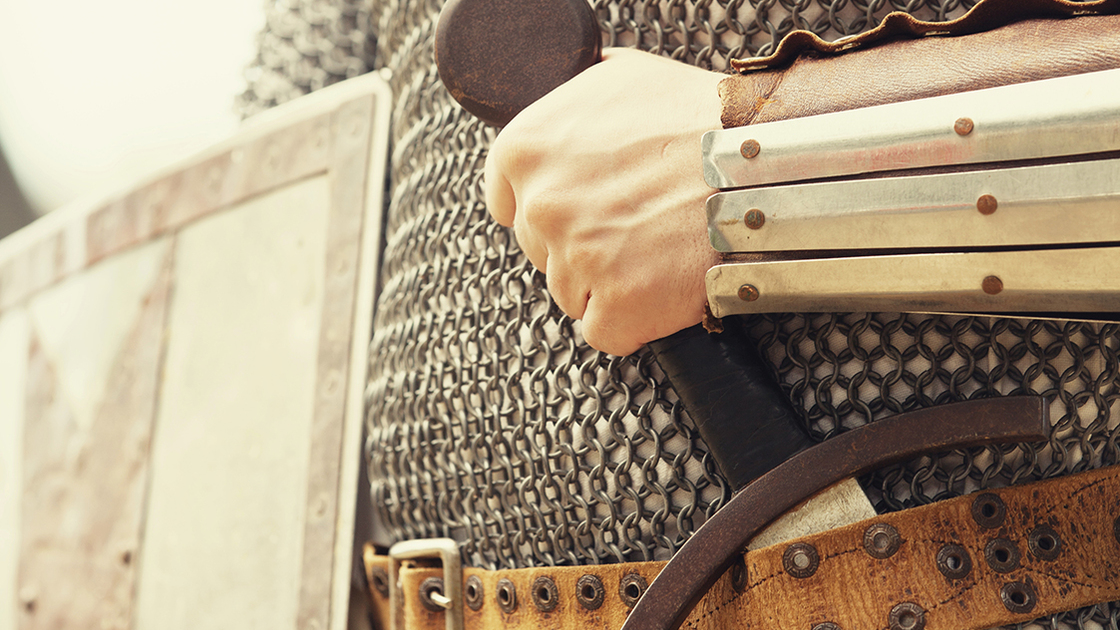 Here’s a real story about a real hero—no stunts, no green screens, no suspension of disbelief required. This is real. This is the story of one of the greatest warriors of King David, and you can read it in 2 Samuel 23:9-10.

“And after him was Eleazar the son of Dodo the Ahohite, one of the three mighty men with David, when they defied the Philistines that were there gathered together to battle, and the men of Israel were gone away: He arose, and smote the Philistines until his hand was weary, and his hand clave unto the sword: and the Lord wrought a great victory that day; and the people returned after him only to spoil.”

The Philistines had dominated the Israelites for generations. For almost all of living memory, Philistine troops had raided, plundered and extorted Israelites. Under David’s administration, Israelite forces had turned the tide on this oppression—but they hadn’t eradicated it. Now Philistine forces had amassed for another assault.

This operation began badly: Rather than standing firm in the day of battle, “the men of Israel were gone away.” It appears they turned back from the enemy. Not their finest hour.

Thankfully, one man stood up and remained steadfast. Eleazar didn’t follow the cowardly crowd. While they ran, he charged. He didn’t berate his fellow soldiers. He simply took action and allowed his example to correct them. He acted alone, sword flashing. A one-man army. “He arose, and smote the Philistines.”

Are you willing to stand alone and fight? God demands that each of us do so (e.g. Philippians 2:12; Matthew 11:12; 1 Corinthians 9:24). Such valor is a virtue that every true man of God must cultivate.

You face danger. You face fear. But don’t give in. Don’t cower. Don’t follow the mob. Don’t cave. Don’t criticize. Don’t hesitate. When those around you show weakness, double your determination to be bold. Rise, and smite the Philistines.

One man plus God is an army mighty enough to take the victory.

Eleazar fought with every mental and physical fiber he had. He wreaked as much damage, created as much havoc, spilled as much Philistine blood, as possible. He clung to his sword and wouldn’t let go.

He never stopped swinging. He would not allow himself to succumb to fatigue, to submit to weakness, to yield to the oncoming crush of enemies. He remained focused—single-minded—vigilantly, violently engaged.

You fight your daily battles against Satan, against an ungodly society, against your own selfish nature—against all of these forces assaulting you at once. This melee demands determined, ceaseless exertion. Relaxing in combat leads to catastrophe. “And let us not be weary in well doing,” Paul commanded. Allow the vision of victory to urge you onward: “for in due season we shall reap, if we faint not” (Galatians 6:9).

It is true that the spirit is willing but the flesh is weak. Eventually, even this mighty warrior’s “hand was weary.” Nevertheless, he gripped his sword so tightly and determinedly that he could not release it: “his hand clave unto the sword.”

Thus is illustrated the indomitability of a true spiritual mighty man. A man who couldn’t drop his weapon even if he wanted to.

This is the way you must be with the truth of God, “the sword of the Spirit” (Ephesians 6:17). Nothing and no one should ever be able to pry it from your grasp. Whatever the job at hand, cling to your sword like it is welded to your hand until the last enemy falls.

Eleazar’s will was indomitable, yet he did reach the limit of his physical strength. The man who never hits this point hasn’t worked to his capacity—he has more to give, if only he would drive himself. This weariness is simply the mark of a mortal man spending every ounce of the might God gives him.

Nevertheless, God ensured Eleazar’s strength held out until the battle was won.

Because this man refused to retreat, refused to relax in executing his duty, refused to submit in the face of odds, refused to forsake God’s cause—“the Lord wrought a great victory that day.” Because of the grit of one man, God prevailed.

Often, God chooses to fight only through harnessing the strength of men. If men will not fight, God will not win. How often God seeks to vanquish an entire army of Philistines—yet those through whom He would do battle are simply “gone away.”

We can never expect God to fight our battles for us if we flee the scene.

We must arise and meet the enemy, entrusting our lives to the fact that God will provide the strength. If even one soldier avails himself of the supernatural strength God offers, God is eager to use that brave man to achieve “a great victory.”

Then, when the battle is won, we must credit the real victor. As hard as Eleazar fought, still, when the last Philistine lay dead before him, he gave God all the credit. The “great victory” was God’s entirely.

God preserved this example in His Word in order to light a fire in future Eleazars like you.

It did just that within the men who observed Eleazar’s action firsthand. When they saw that display of boldness, they “returned after him.” Granted, it was “only to spoil.” But they were back on the battlefield, revitalized by the valor of their brother-in-arms.

When you stand up for God, others will follow. A family will get behind a man who leads. A congregation will grow in faith seeing a single outstanding example. One man’s indomitability can inspire even those in the world who recognize it and witness the triumph.

Stay faithful in fight, dauntless toward danger. Execute your duty. Never relax your sword. Commit the full measure of your strength, guts and heart, and allow God to use it to attain a great victory!