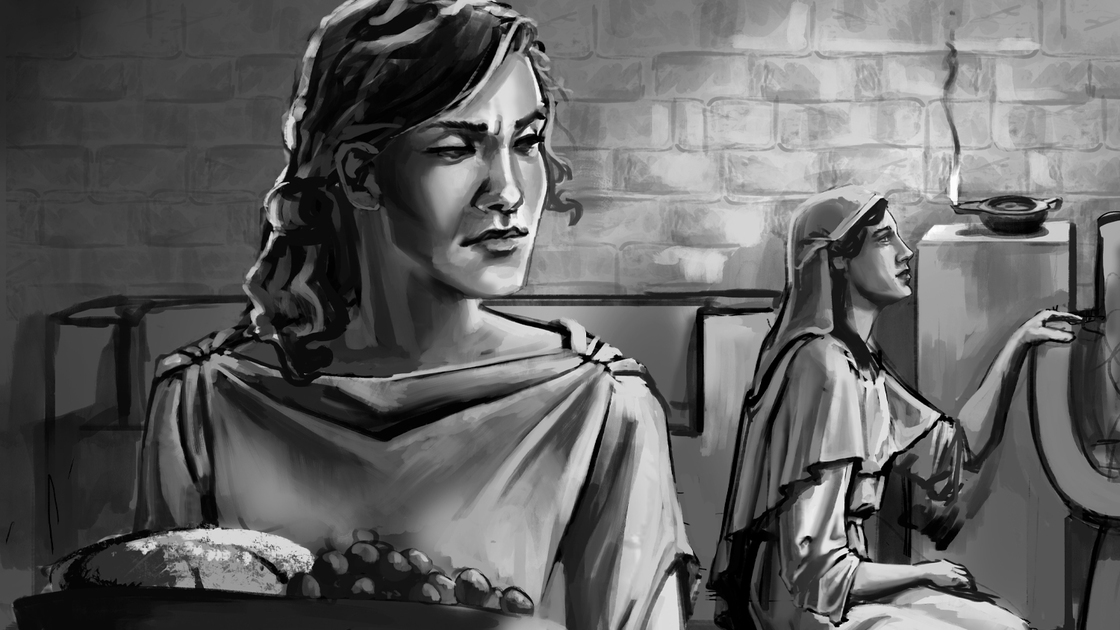 Imagine being alive when Jesus Christ walked the Earth. Imagine knowing Him, talking with Him, relaxing with Him. The Bible indicates that He had an attractive personality; He was a positive and friendly man.

Though He spent a lot of time with 12 men in particular, He would have been friends with nearly everyone. He was a “man’s man,” but He also had several female friends and disciples.

One of these female disciples did something that made Christ say, “Wheresoever this gospel shall be preached in the whole world, there shall also this, that this woman hath done, be told for a memorial of her.”

That’s quite a statement! How would you feel if this was said about you? What a woman this must have been to have done something to receive such adulation from, of all people, the Son of God!

It seems fitting then that we should study this woman as a role model.

The first mention of this woman is in Luke 10. “Now it came to pass, as they went, that he entered into a certain village: and a certain woman named Martha received him into her house” (verse 38).

This village was Bethany, which is situated at the base of the Mount of Olives, just two miles from Jerusalem. This woman, Martha, is not the focus of this article, but she is still a remarkable, admirable woman who you’ll also get to know better.

It’s mainly her sister we want to focus on.

“And she had a sister called Mary, which also sat at Jesus’ feet, and heard his word” (verse 39). Mary “sat at Jesus’ feet”; that means she was learning from Him (see Acts 22:3)—she was one of His students, or disciples.

“But Martha was cumbered about much serving, and came to him, and said, Lord, dost thou not care that my sister hath left me to serve alone? bid her therefore that she help me” (Luke 10:40). She was “cumbered” by it. So this goes much deeper than just carrying out a physical service.

It is a woman’s role to serve and take care of the house. There is great glory in that job. Notice: Women are to be “keepers at home” (Titus 2:5). The Greek has one word for “keepers at home,” and it means “caring for the house, working at home.”

That Greek word can also mean “guard.” The mother’s attitude toward her job has a great deal to do with keeping Satan out of the home. She does, indeed, guard the house!

Another verse adds: “I will therefore that the younger women marry, bear children, guide the house, give none occasion to the adversary to speak reproachfully” (1 Timothy 5:14). So there’s more to keeping a house than just housework. It is a huge responsibility and a hard job. Satan has convinced so many it is just demeaning grunt work. But the duties of a housewife described here as to “guide the house” come from a single Greek word meaning “to be master of a house, or to manage family affairs.” That is far from “demeaning”; every task fulfills a glorious, prestigious office!

A woman has quite a lot of work to do. She manages the house, keeping it clean and organized, she beautifies the outside through landscaping and/or gardening, she keeps the children’s schedules—just to name a few duties. So she is an educator, a servant, a planter, a counselor, a nurse, a dietitian and anything else her household needs her to be.

There is a lot of leadership involved in the woman’s role. Of course every leader has a superior, someone to report to. The woman’s leader is the man of the house. But look at how much responsibility she has under him!

Serving With the Right Motivation

Martha was no doubt great at what she did. But she was “cumbered about much serving,” or she was distracted, over-occupied.

In Martha’s defense, what she was over-occupied with was preparing a meal for the Son of God! This would not have been so wrong, but she brought it up to her Master: Doesn’t it bother you that I’m doing all this? Could you tell Mary to get up and help me?

If we want to get noticed for serving, then we have a problem. We can serve with the wrong motivation, or without 100 percent pure, godly motivation.

“And Jesus answered and said unto her, Martha, Martha, thou art careful and troubled about many things: But one thing is needful: and Mary hath chosen that good part, which shall not be taken away from her” (Luke 10:41-42).

“Martha, Martha ….” Jesus didn’t light into her or start a huge lecture. The language here appears to be friendly exhortation partly to defend what Mary was doing. But Christ did tell her what her problem was, and it was not that she was serving: “[T]hou art careful and troubled about many things ….” That means she was anxious or disturbed. Christ was telling Martha that she was getting distracted with physical things.

“[O]ne thing is needful,” Christ said. Martha was probably making more food than was necessary and getting overly worried about it. Christ was essentially saying, Martha, I only need one dish. What Mary is getting at this table is the better thing to receive and no one can take it away from her. The spiritual is more important than the physical, regardless of how important the physical may seem.

If you see the meaning and the vision in the physical tasks, then you will put the priority on the spiritual. And as long as you have the right motive behind it all, you’ll have things in the right order. You can see how, if we do get caught up in the physical activity, we could get offended at someone who’s sitting down studying or listening to a lecture.

Martha just needed her perspective adjusted. She thought, If the Messiah is here, then we can honor Him by preparing all this food and entertainment and making Him comfortable. But Mary was more on-target in that she knew why Christ was there. He was there to teach. If He comes to teach, then the way you honor Him is by listening. Sure, make sure He’s comfortable and has something to eat, but then listen and learn.

Apply this to your life. How does Christ educate you? How do you sit at His feet? Leaving one of those situations to say, Oh I need to go clean my room so I get a reward, is having the wrong focus and motivation. What better reward than to hear what God is saying to you?

Best Friend of the Family

What you see in both women, however, is that Jesus is the best friend of the family. They loved Him dearly, and wanted to serve Him and learn from Him. This makes both these women admirable.

What a woman you will be if you apply the qualities of both of these women: hanging on every word of Christ and learning how to serve, manage and guard a house!

In our next issue, we will come to the climax of the story: Jesus Christ’s greatest physical miracle, how Mary of Bethany played a key role in it, what she learned from it, and how it caused her to commit an act that received Christ’s highest praise!